The Orchestra of the Metropolitan Opera
John Adams 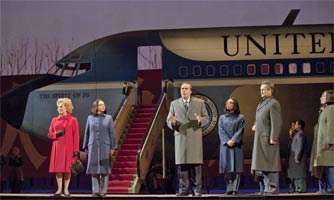 Twenty-four years after its 1987 premiere at Houston Grand Opera, John Adams’s first opera, “Nixon in China”, has come to the Metropolitan Opera, in a production by Peter Sellars (making his company debut), the second Adams opera to be presented at the Met. His “Doctor Atomic” reached Lincoln Center in 2008. When Peter Sellars first met Adams in 1983, the theater-director proposed the idea, including the title for “Nixon in China”. In an interview with Elena Park, the composer said he was skeptical at first given that “Nixon was little more than a butt for late-night comedians”, but that he “eventually realized it was a perfect idea, and that it was right to find our mythology in our own contemporary history.” Sellars’s proposal launched Adams’s operatic career, and their artistic partnership over the past quarter-century has produced five further works for the stage: “The Death of Klinghoffer” (1991), “I Was Looking at the Ceiling and Then I Saw the Sky” (1995), “El Niño” (2000), “Doctor Atomic” (2005) and “A Flowering Tree” (2006). “Nixon in China”, “The Death of Klinghoffer” and “Doctor Atomic” are similar in style – all three explore historic events, but at heart they are more concerned with examining the inner lives of the personalities involved. 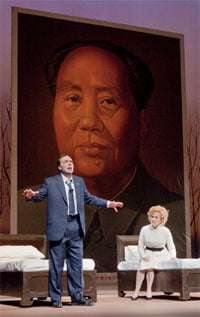 “Nixon in China” is based on US President Richard Milhous Nixon’s 1972 visit to the People’s Republic of China, where he met with Chairman Mao Tse-tung and other Communist officials. While the central action of the opera revolves around and relates some highly publicized events during the five-day visit, Alice Goodman’s libretto weaves back and forth between the public utterances and the private reflections of the lead characters – all very public personae, and each with a complex and problematic personal history.

The original production of “Nixon in China” has been adapted to many and various venues, including the Opera Theatre of Saint Louis, Chicago Opera Theatre, and the Brooklyn Academy of Music. The production now playing the Met debuted at English National Opera in 2006, and has been reconstructed to fit the larger dimensions of the Met stage. Sellars’s concept, which presents the story with intense realism and great imaginative flare, remains unchanged. The opera is presented in three acts and roughly follows the itinerary of Nixon’s visit to China, including his arrival on the presidential jet “The Spirit of ‘76” outside Peking, his fabled meeting with Mao Tse-tung, a banquet at the Great Hall of the People, stops along Mrs Nixon’s official sightseeing tour, and the Nixons’ attendance at a performance of “The Red Detachment of Women”, a lurid, agitprop ballet sponsored by Mao’s wife, stunningly choreographed for this production by Mark Morris. 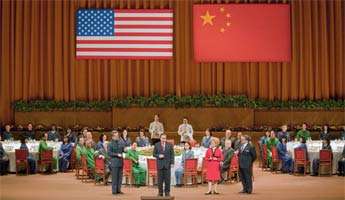 Adams, making his Metropolitan Opera conducting debut, led an authoritative, intense account of his score. The music of “Nixon in China” is built around complex, steadily pulsating rhythms reminiscent of Philip Glass’s early operas “Satyagraha” and “Aknahten”, with the highly varied harmonic and melodic language constantly shifting to follow and emphasize the personalities of the protagonists and the strikingly theatrical situations in which they are involved. The score includes some wonderfully lyrical stretches of vocal writing, such as Chou En-lai’s Act One toast to his American guests and his melancholy reflections near the opera’s deeply touching final moments. More often the vocal writing consists of clipped, staccato-like bursts, as in Nixon’s First Act aria “News has a kind of mystery.” On the whole, the dramatically-motivated score is brightly colored, strongly rhythmic, and richly orchestrated.

The cast was excellent in this performance. James Maddalena, reprising the title-role he created, bears a strong physical resemblance to Nixon and his acting skills effectively brought out the awkward stiffness and flawed humanity of his complex character. He was most effective in the Act One scene where he meets the decrepit but defiant Chairman Mao, well-acted and sung by Robert Brubaker. Janis Kelly was very touching as Pat Nixon. Richard Paul Fink was an appropriate buffoonish Henry Kissinger. Russell Braun as the pensive Chou En-lai had the most beautiful voice and was particularly effective in ‘I am old and I cannot sleep’, the stirring and touching aria which concludes the opera. As Chian Ch’ing (Madam Mao Tse-tung) Kathleen Kim delivered all her lines with appropriately dramatic intensity, and her Act Two bravura aria “I am the wife of Mao Tse-tung” provided one of the vocal and theatrical highlights of the evening.


Some video clips of The Met’s “Nixon in China”: