Verdi
Otello – Opera in four acts to a libretto by Arrigo Boito, after Shakespeare’s Othello [sung in Italian with English Met Titles by Sonya Friedman]

The Orchestra of the Metropolitan Opera
Semyon Bychkov

The Met’s sixth revival of Elijah Moshinsky’s grandly realistic 1994 production of Verdi’s “Otello” got off to a high voltage start from the opening thunderclap, as Semyon Bychkov whipped the orchestra and the vibrant, animated chorus into a frenzy during the storm scene. Bychkov pushed the tempo relentlessly, eliciting maximum sound and fury from the musicians and creating the sensation of impending doom. The performance was most compelling in the second half (the intermission coming between the second and third acts), but the galvanizing potential was evident in the very first chord. 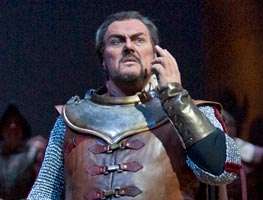 This was not a flawless performance. Carlo Guelfi’s wobbly Iago in Act One did not bode well. Fortunately, his voice settled by Act Two, in which he delivered a firm, chillingly evil ‘Credo’. Overall, he made a powerful Iago – handsome, vigorous and demonic – with an idiomatic command of Verdian style.

Johan Botha also got better and he became more freely expressive and increasingly demonstrated involvement in the drama. The role of Otello requires a clarion tenor with Wagnerian vocal heft and stamina, both of which Botha has in abundance, and which he demonstrated early on as he soared, full-voiced, through his opening ‘Esultate!’ (Rejoice!), but one could have wished for more lyricism in ‘Già nella notte densa’ (Now in the dense night), his first act love duet with Desdemona. But, from Act Two on, there were many affecting moments in his performance, most notably in ‘Niun me tema’ (Let no one fear me), his pathetic farewell to Desdemona in the final scene. 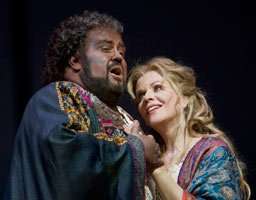 Renée Fleming, in her first full Met performance of Desdemona since 1995, looked and sounded glorious. Combining a wonderful fullness of sound with purity of tone, she gave a deeply moving performance which reached its culmination in her all-important Act Four solos: the sad, unearthly ‘Willow Song’, and the intensely pious ‘Ave Maria’. Together, she and Botha delivered a thrilling performance, never showing a hint of strain, not even in the big Act Three ensemble.

There were some superb supporting performances, especially Wendy White as Emilia and Garrett Sorenson as Cassio, and the impact of the whole was greatly enriched by the splendid singing of the Met Chorus. Finally, though, it was Bychkov’s superb shaping of Verdi’s magnificent score, moving along in one continuous flow, that was most impressive. There was plenty of warmth and tenderness in Bychkov’s luminous reading, along with a bold and brilliant sense of drama. The playing itself was vigorous, lush and mellifluous. This was a masterly opening night performance.