Puccini
Tosca – Opera in three Acts to a libretto by Giuseppe Giacosa & Luigi Illica, based on the play La Tosca by Victorien Sardou [Sung in Italian with Met titles by Sonya Friedman] 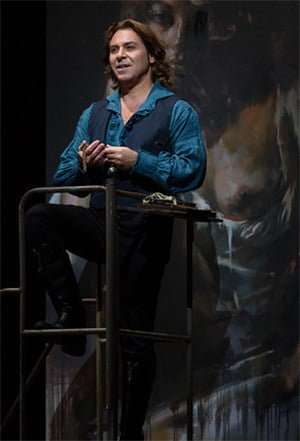 It’s easy to see why Tosca was an immediate hit following its premiere in 1900 in Rome. The title character charms with her earnest faithfulness, even when acting jealous with her lover, an idealistic painter, or confronting the sinister Baron Scarpia, who manipulates everyone to a tragic end. Their shifting moods and fates are energetically conveyed in the score, which also creates great ambience with off-stage choruses, chimes and cannons.

The action unfolds slowly at the start of each Act, with the orchestra largely charged with moving things along. The dramatic brass opening is followed by lovely and lyrical cello lines as an escaped political prisoner, Cesare Angelotti, climbs into a church and hides in the private chapel of his sister, the Marchesa Attavanti. Mario Cavaradossi is at work on a portrait of Mary Magdalene when diva Floria Tosca arrives. They exchange cheeky dialogue amid declarations of love; she admonishes him for “forgetting we are in a church” and “mussing my hair” even as she demands that he swear he isn’t seeing someone else. Patricia Racette and Roberto Alagna created a playful and effervescent chemistry. Tosca’s giddiness is so sweet, even her envy is amusing. She notices that Cavaradossi’s painting resembles the blue-eyed Marchesa (“scheming witch!” she declares on a piercing high note) and insists that he change the eye color to dark, like her own.

Alagna cut a dashing figure and his bright voice was best during emphatic moments such as his vow to Tosca (“Only you!”) in the first Act. But through much of the evening he faced forward and stood woodenly as if performing in a recital. Fortunately Racette is as much an actress as singer. Her fluttering and graceful movements more than compensated for Alagna’s stiffness, and the two were positively engaging as innocents in love. The Met Orchestra, under the athletic direction of Riccardo Frizza, did a splendid job of keeping pace with rapid shifts in rhythm and mood. 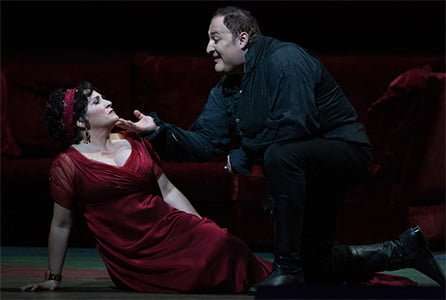 When Tosca has gone, Cavaradossi leaves with Angelotti to hide him at the painter’s villa. Soon afterward, Scarpia’s arrival in the church is announced by a shaft of white light shining on his large, stout figure. In dark tones the police chief sings about his search for Angelotti, and starts to scheme when a fan bearing the Marchesa’s crest is discovered. Though Scarpia realizes the fan indicates that Angelotti had help from an accomplice, Tosca believes it is evidence that Cavaradossi has betrayed her with the Marchesa. As she frets – to beautiful, mournful accompaniment – and leaves the church vowing vengeance, Scarpia sends a man to follow her, believing it will lead to Angelotti’s hiding place.

George Gagnidze’s imposing physique suits Scarpia well, but his baritone barely projected and was often lost against the orchestra and Racette’s robust delivery – disappointing given how crucial and wicked the character is. Nonetheless, his menacing and scheming presence came across in one of the most stirring parts of the opera: the haunting and rousingly ominous end of Act One. As a congregation fills the church for a Te Deum, the scheming Scarpia sings of lodging wild jealousy in Tosca’s heart.

The second Act unfolds in Scarpia’s palace rooms, with women draped about to convey his utter debasement. Whereas the cavernous church gave the first Act a real feeling of place, Scarpia’s residence felt oddly incomplete and modern. Uncomfortably dim lighting also plagued the scene, except for a searing white beam that burst from a side door representing the chamber where Scarpia sends Cavaradossi to be tortured. Again, Gagnidze’s voice was disappointingly thin, and his volume couldn’t match the depth and richness of Racette’s as Scarpia tries to wrest Angelotti’s whereabouts from Tosca. She professes to know nothing, but Scarpia increases Cavaradossi’s torture until she can bear it no longer and discloses the fugitive’s hiding place. When Scarpia asks Tosca to submit to his advances in exchange for her lover’s freedom, the beauty of Tosca’s character shines through as she laments her situation in the aria ‘Vissi d’arte’. Racette carried the scene with her excellent acting and singing. Eventually she agrees to submit to Scarpia in exchange for Cavaradossi’s release, but then discovers a knife that she uses to kill the Baron. The Act comes to a prolonged close as Tosca stumbles around the room in a state of vulnerability, shock and distress.

The final Act opens with another extended orchestral sequence as Cavaradossi awaits what Tosca believes will be a mock execution arranged by Scarpia. Soldiers pace and Cavaradossi plays a board-game with a guard before a sublime cello duet accompanies his request that the soldier deliver a farewell letter to Tosca. Partway through the painter’s aria, ‘E lucevan le stelle’, Alagna’s voice became fuller and more expansive. Tosca arrives to tell Cavaradossi about their freedom. Her hope is endearing as she demonstrates to him how to play dead. The duo’s voices were well matched, and the cellists exquisite, before Cavaradossi goes before the firing squad. The bullets are real, and as Scarpia’s minion arrives to arrest Tosca for murder, she jumps off the battlement to her death.