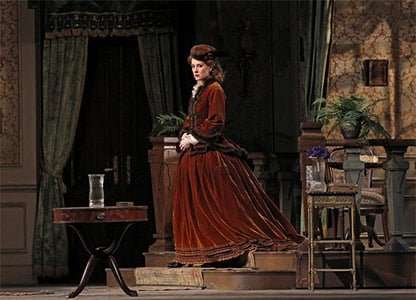 Richard Strauss’s lively romance Arabella (1932) returns to the Metropolitan Opera repertory after a decade and more. Regarded as an inferior follow-up to Der Rosenkavalier, Strauss’s final collaboration with Hugo von Hofmannsthal is now more often referred to as an “opera for connoisseurs”. Hofmannsthal died of a stroke shortly after he had completed the final version of Act One, and while the libretto is less than superb, the work has some very special qualities – a poignant love story set in Vienna in the1860s, an intimate and graceful score, and one of the most heart-tugging finales in the entire repertoire.

The plot focuses on the aristocratic Viennese Waldner family. Bankrupted by the father’s gambling, the only hope is to marry off the older, eponymously named daughter to someone solvent. Unable to afford to introduce two daughters into society at the same time, the parents have disguised their younger offspring Zdenka, as a boy. The plot revolves around Arabella’s good fortune in finding true love with a wealthy Balkan landowner, Mandryka, and Zdenka’s secret, and finally successful, efforts to ensnare Matteo, one of Arabella’s rejected suitors. 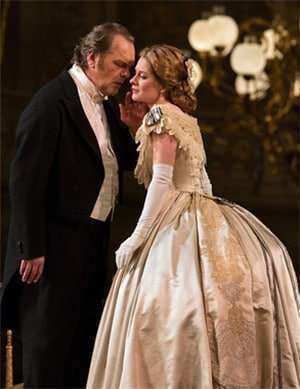 This appropriately nostalgic Otto Schenk production, which premiered in 1983, boasts many strong points: handsome period costumes by Milena Canonero, lavish sets by Günther Schneider-Siemssen, and dramatically effective lighting by Gil Wechsler. But what made this first-night performance truly brilliant was great singing and acting by the strong cast, six of whom were making their Met debuts.

In only her third appearance at this house (she sang two performances of Marguerite in Gounod’s Faust in the 2011-12 season), Malin Byström was a welcome surprise in the title role. A tall, glamorous figure, she was as lovely to watch as she was to listen to. Arabella’s pride, sincerity and warmth were always present in her characterization, and her plush voice demonstrated wonderful tonal variety and verbal clarity. She was deeply affecting in projecting her character’s dignity and hurt when unfairly accused of betrayal by Mandryka, and she was especially well-partnered with Juliane Banse, who made an uncommonly convincing Zdenka. Banse’s lighter but equally secure soprano blended to perfection with Byström’s in the crucial scenes when they are together.

In the evening’s most highly-anticipated debut, Michael Volle was a superb Mandryka. In a role that makes great demands in both the highest and lowest extremes of the baritone range, he was completely at ease with the writing, and his well-tuned instrument was finely supported by a strong physical and verbal presence. His highly nuanced performance tellingly portrayed both the tender and rough sides of Mandryka’s character and he was at his most convincing in the Act Two love-scene

Stage director Stephen Pickover obtained wonderfully nuanced and natural performances from the cast; and in an opera in which dialogue is all-important the singers brought fine diction to the sung as well as the spoken words. Philippe Auguin complimented this with a sumptuous performance from the Met Orchestra that stressed the intimate aspects of Strauss’s score while letting the gleaming sonorities shine through.