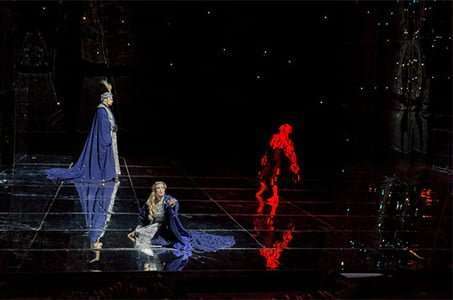 The Metropolitan Opera is staging the first revival in ten years of Herbert Wernicke’s production of Richard Strauss’s Die Frau ohne Schatten (The Woman without a Shadow) that premiered in 2001. Vladimir Jurowski, conducting his first Strauss opera at the Met, drew a fine and idiomatic sound from the huge MET orchestra that filled the pit to capacity. He seemed to grow more and more comfortable with the score, which is performed uncut in this production, and the music bloomed expansively as the opera progressed. The exceptionally large brass section had the most powerful impact, but the entire orchestra played brilliantly for Jurowski. This opening night performance was also notable for the excellent (and overdue) Met debut of Anne Schwanewilms as the Empress, although the loudest cheers of the evening were for Christine Goerke.

Of the six operas on which Strauss and Hugo von Hofmannsthal collaborated, Die Frau has the most complex plot. The Emperor of the mythical realm of the South Eastern Islands, while hunting a year previously with his falcon, captured a gazelle that transformed into a mortal woman, and the two fell in love and married. The Empress’s power to change form had come from a talisman given to her by her father, the spirit god Keikobad, but the falcon flew off with it. In the ensuing time, the Emperor made love to the Empress every night and went hunting every day while she slept, but she, not being fully human, cannot cast a shadow – something that represents both fecundity and humanity – and cannot conceive a child. The plot revolves around the Empress’s interactions with the human world as she tries to acquire a silhouette. 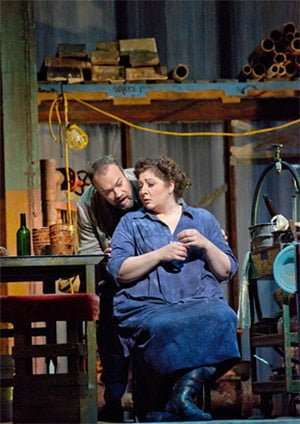 Her quest is set in motion when Keikobad’s messenger tells the Nurse that unless the Empress achieves her goal within three days, she will be returned to her father and the Emperor will be turned to stone. The Nurse’s loyalties are divided, as she serves both Keikobad and her mistress, from whom she has withheld all information about this curse. But when the Empress is alerted to it by the returning falcon, the Nurse reluctantly agrees to help her obtain a shadow. They descend into the hut of another childless couple, the dyer Barak and his embittered wife. Perhaps Hofmannsthal was prophetic in giving the opera’s most sympathetic character – a dyer (a ‘person of color’?) who is kind-hearted and generous, caring for the disabled and feeding the hungry, yet is constantly criticized and ill-treated – the name Barak.

As the Nurse repeatedly tempts the Dyer’s Wife to exchange her shadow for riches, luxury and a young lover, the Empress feels a growing empathy with the beleaguered Barak. Ultimately, although accepting the shadow would save the Emperor, she refuses as this would deny Barak the children he deeply longs for. Her act of humanity is rewarded by the appearance of a shadow and the Emperor’s return to life. Barak is also happily reunited with his Wife, who again casts a shadow, and both couples rejoice along with the voices of their as-yet unborn children.

Wernicke’s set rises and descends as the action shifts back and forth between the spirit and imperial realms above and the earthly environs of the dyer’s hut below, changes of setting signaled by orchestral interludes. In Act One, when the Empress and Nurse descend to Barak’s dwelling, the accompaniment is reminiscent of Wotan and Loge’s descent to Nibelheim in Das Rheingold, with steady beats coming not from anvils but from rute and castanets to introduce Barak’s quarreling, deformed brothers. In Act Two, as the action shifts to the Emperor’s hunting lodge, high woodwinds mimic the falcon’s cries and an extended cello solo (beautifully played by Jerry Grossman) represents the Emperor’s hunting song.

Wernicke’s set and costumes depict Barak’s hut and its inhabitants quite realistically, emphasizing the shabbiness of their milieu, which serves as both living and working quarters. In contrast to this realism, the upper regions are represented abstractly by a hollow, mirrored cube, its front open to the audience and its rear sometimes closed with either mirrors or filmy curtains. The mirrors and lighting combine to produce a variety of interesting effects. 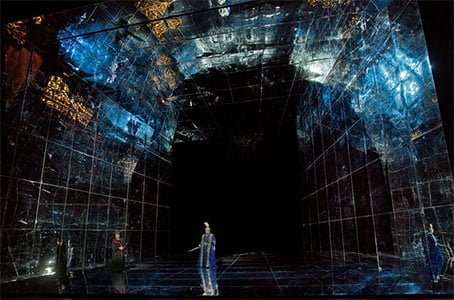 The detailed stage directions would be next to impossible to execute fully, so compromises are necessary, but using the upper set – even with minor changes in appearance – to represent different locales goes too far in impeding understanding the plot. The failure to distinguish between the imperial palace and the hunting lodge makes the Emperor’s scene with the falcon confusing, and by not depicting the cave and portal in the Empress’s dream in Act Two, her recognition of that location in Act Three seems a contradiction of what the audience sees. Even more serious deviations occur when Barak and his Wife are supposed to sink into the earth at the end of Act Two, and then be discovered in separate chambers of an underground dungeon as Act Three begins. Instead, they are in their home as the Act Two curtain falls, and begin the final Act with Barak high up on the stairway as his Wife remains where she was. Later, summoned by a voice from above, they ascend to the mirrored cube, now supposed to be the gateway to a temple in the spirit world, sitting separately on opposite sides of the stage and then wandering back and forth without finding each other, owing to the misleading directions offered them by the Nurse. Wernicke’s production also does not depict either the fountain from which the Empress refuses to drink at the most crucial moment in the opera or the appearance of her shadow, which is after all, the resolution of the central theme of the plot. More effective was the mirrored robe used when the Emperor had been turned to stone, which fell away when he returned to life.

These cavils aside, there is much to praise about this powerful and moving performance. The omnipresent Empress is important to the plot even when she has little singing. Schwanewilms brought elegance to the role, excelling in the coloratura-laden vocal line in the opening scene, allowing her affection and sympathy for Barak to grow convincingly, and singing with dramatic heft in the denouement. Torsten Kerl’s Heldentenor voice was well matched with hers in their single scene, and resonated well throughout. Johan Reuter’s sensitive portrayal of Barak was outstanding both vocally and dramatically. His Act Three ‘Mir anvertraut’ was a highpoint, but most touching was the Dyer’s despair at the end of Act One as he sat staring into the open refrigerator while his Wife was in bed alone across the room and a trio of Watchmen sang in unison atop the set, entreating couples to procreate. These three principals, together with Goerke, had previously sung these roles under Jurowski in a concert in the Amsterdam Concertgebouw last February, and that teamwork surely benefitted them here.

Goerke herself is returning to the Met as the Dyer’s Wife after an absence of several seasons during which her international career has blossomed. She brought her character to life as she berated her husband and his deformed and annoying brothers, despaired at her failure to conceive a child, and succumbed to the Nurse’s temptations. She was well up to the role’s considerable demands. The Nurse is constantly at the center of the action – until she is banished in the final Act. Ildikó Komlósi sang her large and challenging role with accurate intonation and tremendous power. Richard Paul Fink was also powerful as the Messenger, and the remaining members of the cast were also excellent.