The Orchestra of the Metropolitan Opera
Riccardo Frizza 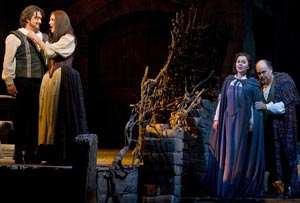 Monterone’s “maledizione” (curse) on Rigoletto and the Duke hovers over every aspect of this opera. This production – first presented at the Met in 1989 – is effective in highlighting the power of superstition on the guilty mind of a narrow-thinking individual – Rigoletto. The sets are foreboding, with dark colors and reduced lighting. Even when Gilda sings her illuminating aria, ‘Caro nome’, the setting (her house with its grey and bleached white stones and the insipid sunlight on the patio where she sings the aria) reminds us of the ultimate tragedy that will befall Rigoletto and his beloved daughter. The opera has many moments of memorable music and the singers did them justice – in particular in the duets.

Verdi lost his wife and two children, and transformed his pain into some of the most heart-wrenching parent-child relationships in opera. Roberto Frontali was especially convincing when he sang Rigoletto’s achingly beautiful lines to Aleksandra Kurzak’s Gilda, such as in the Act One duet ‘Deh non parlare al misero’ (Ah, do not wake a memory so sad). The remembrances of dead wife and mother were brilliantly conveyed, with the inherent alternating moods of tension and sympathy sung to great effect. In the Act Two duet, ‘Tutte le feste al tempio’ (Each Sunday while I went to church), in which Gilda explains to her father why she had had deep feelings for the student Gualtier Maldè (in reality the Duke), Frontali persuasively sang Rigoletto’s response of understanding his daughter’s original feelings for the Duke. 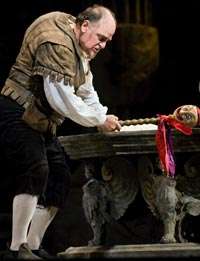 Frontali’s solo parts were dynamically sung in a ringing voice that mustered every nuance of Rigoletto’s personality, such as in the Act One aria ‘Pari siamo!’ (My weapon is my tongue – and [Sparafucile’s] the dagger) in which Rigoletto thinks about his life as a jester and that it has not always brought out the best in him. In his Act Two aria ‘Cortigiani, vil razza dannata’ (Impious courtiers, race of cowards), Frontali powerfully conveys Rigoletto’s anger and bravery in front of the men who had kidnapped his daughter, thus displaying that even a lowly jester who is mocked at court can still have unbridled feelings toward another human being – in this case, his daughter. Frontali’s singing and acting all evening were masterful.

Aleksandra Kurzak (Gilda) added much fire and energy to the performance. Her ‘Caro nome’ was ardently sung with the top notes ringing true and full of emotive power. Gilda’s duets with her father worked wonderfully. In the dying, and ultimately, death scene, Kurzak brought Gilda’s final feelings brilliantly to life – something not easy to do while lying in a potato sack! Kurzak’s superb coloratura soprano was put to productive and efficient use, as was her acting ability. Her presence was both subtle and obvious, and her performance never disappointed. 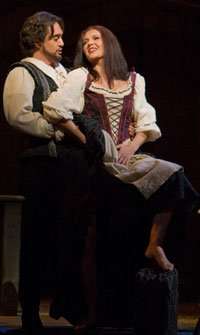 Giuseppe Filianoti (The Duke of Mantua) and his sweet tenor voice was the perfect foil to his invidious personality – a womanizer who does not care whom he emotionally harms. You want to dislike him, but he is so charming that even Gilda falls for him. Filianoti’s voice was at its best and most convincing in the upper range. The Duke’s final resounding notes in the famous Act Three ‘La donna è mobile’, where the Duke sings about female volatility, were sung effortlessly and clearly. The Duke’s Act One ‘Questa o quella per pari sono’ (The beauties around here have no control over me) immediately brought out his feelings about women. The Duke is a dissolute character, but perhaps not one to hate. Filianoti’s portrayal and singing of the role brought this to the forefront – a bad guy we can actually like.

Bass Mikhail Petrenko’s Sparafucile was convincingly menacing. We first meet him in Act One, when he offers Rigoletto his services as an assassin. Sparafucile’s roll-call of how he does his work was sung with a darkly emotive power. In Act Three, Sparafucile again appears, and here Petrenko really brought out the wicked world that he inhabits. Viktoria Vizin’s husky mezzo-soprano was very seductive, the powerful and subtle shading of Maddalena’s music skillfully rendered. Her effective coquettishness around the Duke was a delight to behold. The glorious quartet in Act Three quartet ‘Bella figlia dell’amore’ was magically sung, but all the other singers performed admirably and made their presence felt. The chorus was subtly evident in Act Three when Gilda was dying, its low background humming effectively chilling.

Riccardo Frizza, in his Met debut, conducted at an even pace. He is a singer’s conductor. The Prelude, with its short burst of menace and a kind of synopsis of what was to come in the opera, was nicely played, especially with the brass and solo trumpet and trombone intoning the “maledizione” that was to befall Rigoletto. The English horn solo in the part in Act Two where Rigoletto asks pity of the courtiers in the ducal palace for a father’s sorrow (Gilda is in the palace with the Duke against her will) was a beauteous piece of a musical interpretation of emotion.

There are ten more performances of “Rigoletto”, adding to the 816 the Met has already given. May those ten be as marvelous as this one.