Boito
Mefistofele – Opera in a Prologue, four Acts and an Epilogue to a libretto by the composer based on the play Faust by Johann Wolfgang von Goethe [sung in Italian, with Met Titles by Sonya Friedman] 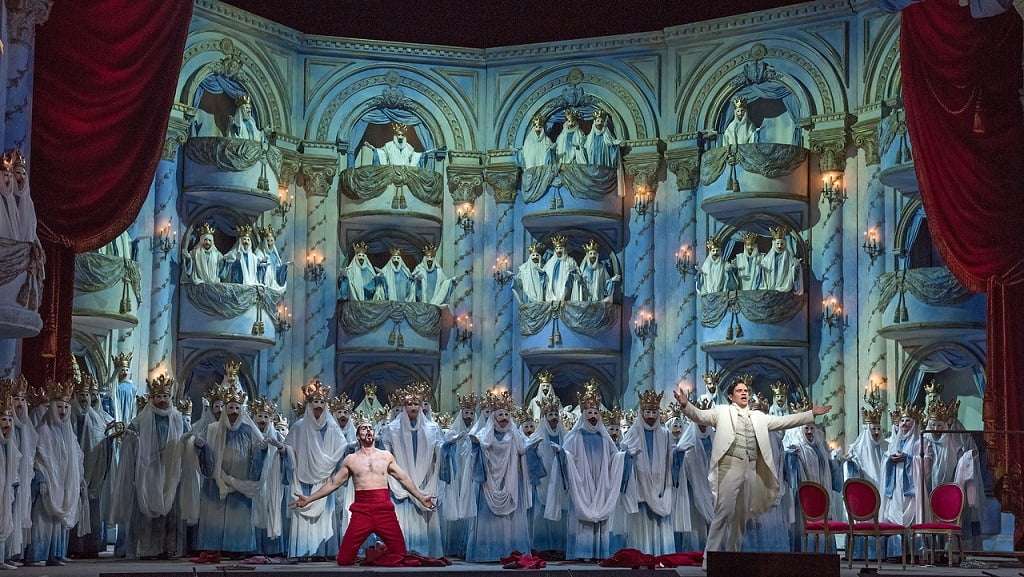 Best-known today for his librettos for Verdi’s Otello and Falstaff, Arrigo Boito’s Mefistofele (his only opera, first staged in 1868 and then revised) was a staple at the Met in the early-1920s, often pairing Beniamino Gigli as Faust and Fyodor Chaliapin in the title-role, but it vanished, not returning until 1999 in this production by Robert Carsen, now revived.

In his first leading part at this house, Christian Van Horn projects powerfully yet with much nuance, although his lowest register lacks the basso profundo quality that would be ideal. His physically imposing appearance is just right though, and he brings out the devilish humor in the composer’s text. Carsen’s staging offers many comedic opportunities, Van Horn at his most amusing at the Witches’ Sabbath (red moon and costumes, black surroundings) where he toys with and pops a balloon representing the Earth in a scene reminiscent of Charlie Chaplin in The Great Dictator; then he ‘conducts’ the gaggle in their thrilling fugal chorus. 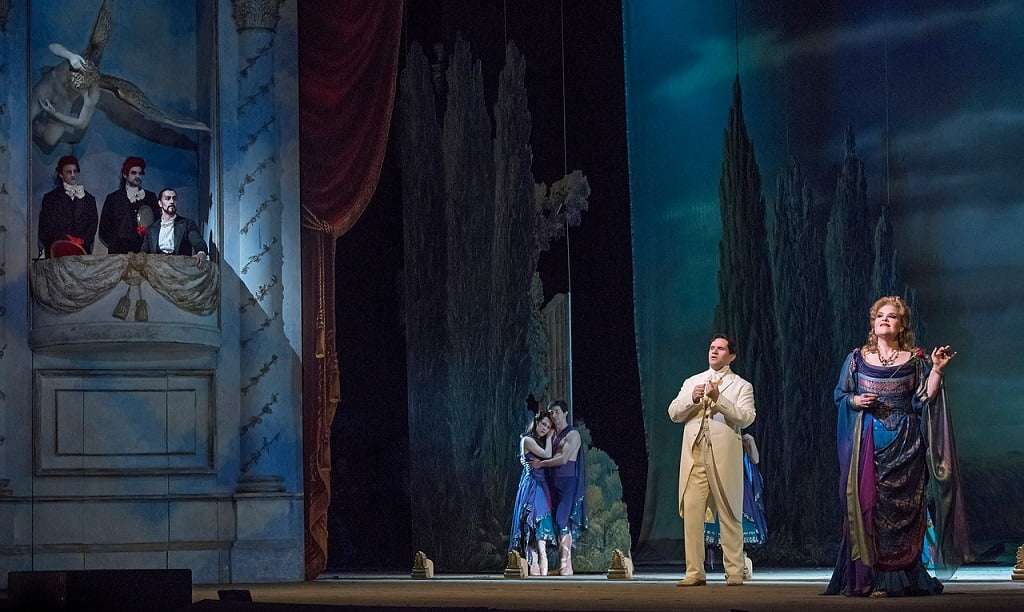 Michael Fabiano’s voice rings out with thrilling quality, but he had occasional difficulty with intonation, though was back on form in the final Act and the Epilogue. His Faust leans more toward the philosophical than the romantic, yet he is quite tender in duets with Angela Meade’s Margherita and Jennifer Check’s Helen of Troy. Meade also had problems with top notes, but sang well on the whole, the duet ‘Lontano, lontano’, in which the dying Margherita and Faust imagine fleeing to an idyllic isle, a highlight. Check’s gloomy description of the fall of Troy in Act Four matches her dark cloak, which is removed to reveal a colorful dress more suited to Helen and Faust’s lovely duet, ‘Amore, misterio celeste’.

The Orchestra, in fine form, keeps pace with Carlo Rizzi’s generally brisk tempos, but most impressive is the Met Chorus: as the Heavenly Host the hymns of praise are as glorious as the Easter revels in Act One are raucous. Designer Michael Levine sets the opera on a stage within a stage. The Met curtain and a painted one behind it rise in turn to reveal a proscenium with yet another drape, onto which flames are projected as the prelude starkly contrasts Heaven and Hell. At the sides angels observe proceedings. The most spectacular episode is the Easter celebration in Frankfurt, its pageantry replete with revelers, clerics and penitents, and a rather bawdy enactment of the story of Adam and Eve. Margherita’s appearances are placed in neighbor Marta’s garden and a burned-out version serves as her prison cell; and the scene with Helen is set with the chorus as audience, suggesting that Faust’s imagination is at play.