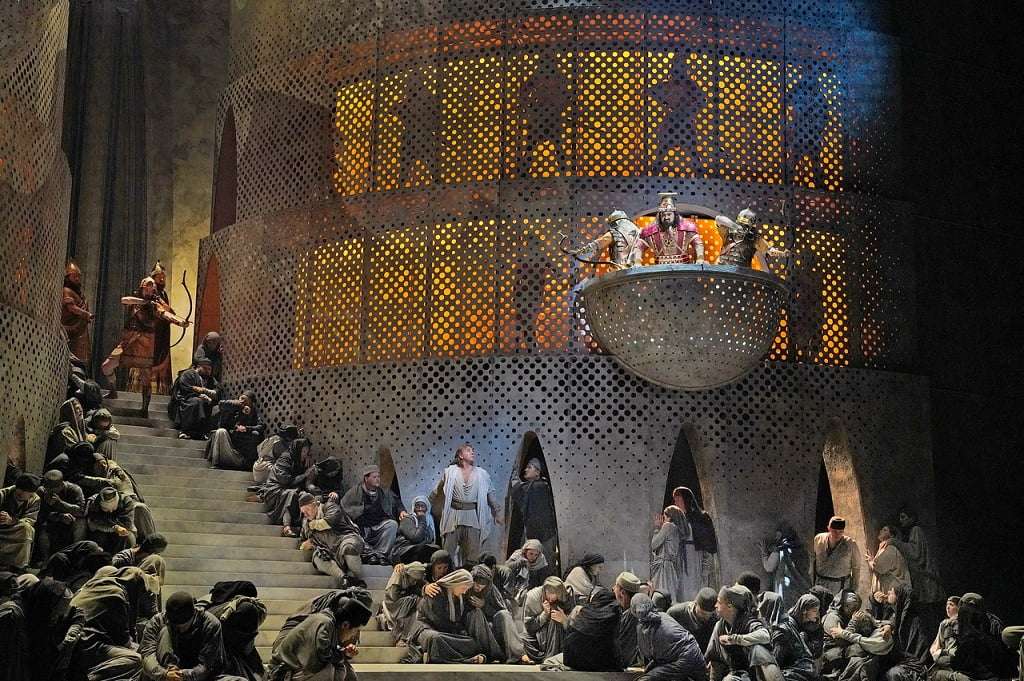 Darko Tresnjak’s new production of Camille Saint-Saëns’s Samson et Dalila opens the Metropolitan Opera’s 2018-2019 season. The attractive and colorful staging has set- and costume-designs that evoke the time and place in which the familiar story from the biblical Book of Judges is drawn and lighting effects that serve to complement the action.

Roberto Alagna and Elīna Garanča sing beautifully but never replicated the chemistry that marked their Don José and Carmen in recent seasons. An announcement advised that Alagna was recovering from a severe cold, but he performed without apparent vocal distress. His portrayal appropriately reflected Samson’s changing circumstances – confident as he leads the enslaved Hebrews in rebellion, love-struck as he succumbs to Delilah’s wiles, despondent as he is condemned to turn a mill-wheel, and finally prayerful and triumphant as he brings the Temple of Dagon down. Garanča’s Delilah single-mindedly plots Samson’s downfall, her voice smooth and lush, at times expressing bitterness and vengeance, and at others taunting and sarcastic. The highlight is the gorgeously sung ‘Mon coeur s’ouvre à ta voix’ in which Delilah uses her powers of seduction to get Samson to reveal the secret of his superhuman strength. His declaration of love as he joins her in duet marks the crucial turning point and Alagna delivered it with appropriate impact. 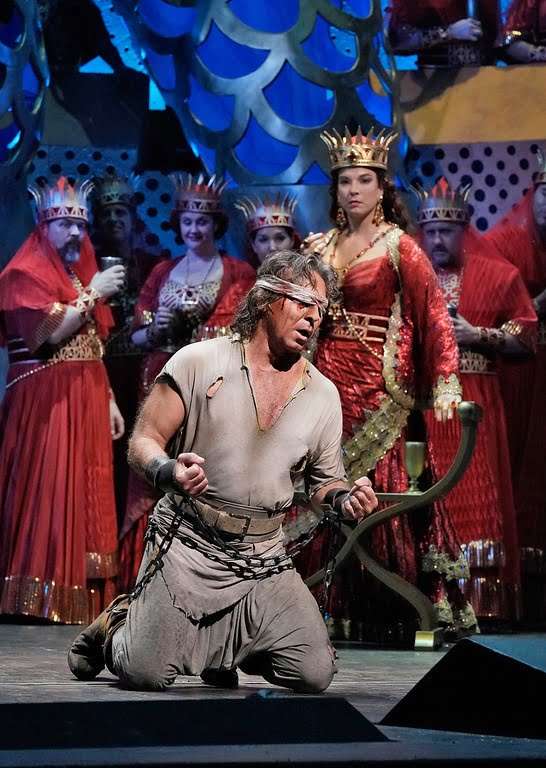 Laurent Naouri gave a powerful account as the High Priest of Dagon. Elchin Azizov and Dmitry Belosselskiy also performed admirably. The Met Chorus is marvelous, from the fugal plea of the Hebrews for redemption from slavery and their unseen voices berating the imprisoned Samson, and finally as the celebrating Philistines. Mark Elder gives the score a sensitive reading, as well as bringing out oriental influences heard principally in the ‘Bacchanale’. The visceral rumblings of the low strings at the outset landed with searing impact and, in contrast, frequent contributions of harp and flute add delicate touches.

Alexander Dodge’s set narrows the proscenium with a circular frame surrounding a curtain patterned with handprints that symbolize the enslaved Hebrews. It and a second translucent curtain behind it, as well as the structures behind them – including an enormous statue of Dagon in the final scene – all feature latticed designs that also function as handholds and footholds for dancers. Linda Cho enhances Delilah’s sensuousness with a slinky green gown, and provides brightly colored, rather garish costumes for the Philistines, and appropriately drab garb for the Hebrews. Austin McCormick stages rather lovely dances for the Philistine maidens in early scenes, and an extended ballet for the ‘Bacchanale’, with scantily-clad men dancing acrobatically together at first and then joined by less-scantily-clad women.

Tresnjak’s direction, though generally unexceptional, is quite disappointing in the closing moments. Samson is supposed to break the pillars that support the Temple, but there are none, so all Samson can do is break the chain that binds his wrists. This moment cries out for a coup de théâtre – even if not as cataclysmic as Otto Schenk’s bygone staging of Götterdämmerung.