Verdi
Simon Boccanegra – Opera in a prologue and three acts to a libretto by Francesco Maria Piave & Arrigo Boito after the play by Antonio Garcia Gutiérrez [1881 Revision; sung in Italian with English Met Titles by Sonya Haddad] 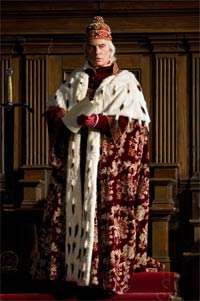 What a wonderful experience to hear such great singing in an opera that seems recently to have achieved the greater respect and recognition it deserves. Although “Simon Boccanegra” has a long and glorious history of productions at the Met and has featured some of the greatest singers (the 1932 US premiere starred Lawrence Tibbett, Maria Müller, Giovanni Martinelli and Ezio Pinza, after which the title role was sung by such notables as Leonard Warren and Cornell MacNeil, and more recently Thomas Hampson and Plácido Domingo). This season’s Boccanegra is Dmitri Hvorostovsky, whose secure, liquid vocal production and stentorian power give full measure to the role of the Genoese Doge.Verdi wrote Simon Boccanegra in 1857 (and revised it in 1881), only a few years after “Il trovatore” and “La traviata”, both premiered in 1853. So it is not surprising that certain passages in the later work recall his earlier triumphs. But “Simon Boccanegra” is also forward-looking – the role of Pietro might be considered a study for Iago in “Otello”. 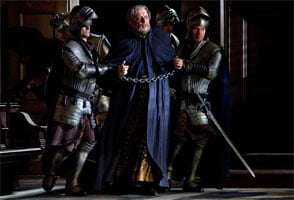 The opera takes place in Genoa in 1339, when Simon Boccanegra, a plebian and a corsair famous for his successful raids against Genoa’s enemies, became the doge (leader) of that Republic, during a period of political conflict between patricians and plebeians. He fell in love with Maria, who was the daughter of Fiesco, Simon’s presumed adversary, and had a child (daughter) by her out of wedlock. Maria was forced into a convent where she died, while her child was whisked away and raised by a nurse outside the city, unbeknownst to Simon. It turns out that the child, also called Maria, has been raised as a member of the aristocratic Grimaldi household. In the Prologue, Fiesco leaves Simon to search the Fiesci palace for his beloved, only to find her dead body. In a state of bewilderment and deepest grief, he is told that he has just been elected doge.

Act One begins twenty-five years later. Maria’s daughter, now known as Amelia, has fallen in love with Gabriele Adorno, a nobleman whose father was killed by Boccanegra. When Simon visits Amelia, they discover that they are father and daughter, and she tells him of her love for Gabriele. Simon insists that Amelia keep their relationship secret. He tells Paolo, who is also in love with Amelia, that he should give up any idea of marrying her. Paolo revenges himself upon Simon by having Amelia abducted. During the third scene of Act One, Amelia enters the council chamber, having been rescued from captivity, and says that she knows who is responsible for her abduction without making a direct accusation. As if he, too, knows who the culprit is, Simon makes Paolo curse the abductor, who is, of course, none other than Paolo himself. 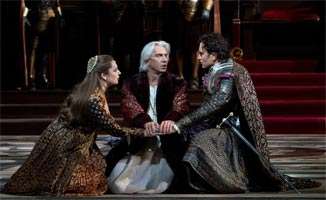 Act Two begins as Paolo urges Fiesco to murder Boccanegra in his sleep. Although Fiesco refuses, Paolo poisons Simon’s drinking-water and tries to turn Gabriele against the Doge by insinuating that Amelia is his mistress. In answer to her pleas, Boccanegra pardons Gabriele. But when he is alone and tired, he drinks the water and falls asleep. When Gabriele returns and confronts the Doge, Boccanegra tells the young lover that Amelia is his daughter. Gabriele is overcome with remorse for having treated Simon so cruelly. Simon then tells Gabriele that if he succeeds in quelling the rebellion that has begun, Amelia shall be his. As Act Three begins, we are told that the uprising has been put down largely thanks to Gabriele’s efforts. But Boccanegra slowly succumbs to the poison. He tells Fiesco that Amelia is his long-lost daughter and, at last, is reconciled with him. After Gabriele and Amelia emerge from the wedding festivities, Simon names Gabriele as his successor and dies. 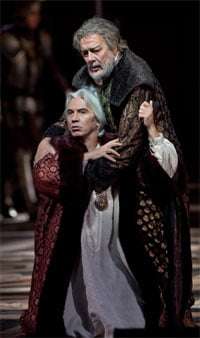 Despite Hvorostovsky’s impressive voice, and his moving death scene, his portrayal of Boccanegra was rather stilted earlier on. When he emerges from the palace at the end of the Prologue, having discovered his beloved’s dead body, he seemed more frozen than anguished. In Act One he sheds the brown wig for his own white hair presumably to show how he has aged after twenty-five years, yet without facial make-up he seems hardly older than before. Consequently, he simply does not look the part of a father in his scenes with Amelia – no wonder Gabriele is so intensely jealous! Exceedingly handsome, he is, without question, every inch the Doge, strong, willful and majestic.

Ferruccio Furlanetto was very impressive as Fiesco, Simon’s purported enemy. Furlanetto’s strong, dark, sometimes-sinister-sounding voice, capable of sustaining its rich and vibrant character at the lowest as well as the highest level of the part’s extremely broad range, together with his moving portrayal of the elder statesman of the patrician party, was another highlight of the evening. Notwithstanding the great bassos of the past who took on this challenging role (such as Pinza and Ghiaurov), one wonders how Furlanetto’s performance could possibly have been improved upon.

Simon’s foil, in the guise of his faithful advocate, Paolo Albioni, was sung by Nicola Alaimo. Making his Met debut in this role, Alaimo seemed only moderately involved during the Prologue, his voice sounding somewhat dry and temperate. But as he grew to hate Simon for failing to secure for him the hand of Maria despite his staunch support of him as a candidate for Doge, Alaimo emerged as a strong-willed if deluded arch-enemy. Another impressive performance was given by Ramón Vargas, in the part of Gabriele Adorno, Maria’s secret lover and leader of the plebian opposition. His ardent, full-voiced and intensely dramatic portrayal was gripping in his Act Two aria ‘Cielo pietoso rendila’. Barbara Frittoli seemed withdrawn rather than simply shy at first, treating her lover Gabriele in Act One almost as if he was her brother! But as the tale developed, she became increasingly involved and less self-conscious. Although she had some difficulty controlling a slight wobble when she forced high notes, her mezza-voce was superb, particularly during the close of Act One.

I anticipated the Council Chamber scene (added to the 1881 revision), essentially the focal point of the opera, to take top honors. But the opera’s closing scene was particularly stirring. One could not necessarily say the same for Giancarlo del Monaco’s 1995 production, although the grandiose realism – which juxtaposes pale gray or tan-stone facades for the external structures with a brightly elaborate display of early renaissance wall-paintings that surrounds the Chamber – seems in keeping with the contrast between the tragedy and power that underlies the plot. The Met Orchestra, without James Levine at the helm due to a “severe cold”, was admirably conductor by John Keenan, although Levine left his imprint on the orchestral performance, evident in its fluid lyricism, rhythmic precision, light touch and appropriate balancing with the singers.