Verdi
Simon Boccanegra – Opera in a prologue and three acts to a libretto by Francesco Maria Piave & Arrigo Boito after the play by Antonio Garcia Gutiérrez [1881 Version; sung in Italian with English Met Titles by Sonya Haddad] 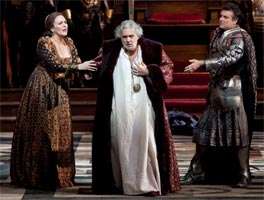 During the current Metropolitan Opera revival of Giuseppe Verdi’s “Simon Boccanegra”, all eyes – and ears – have been focused on the portrayal of the title role by Plácido Domingo. Not that it is unusual for Domingo to take on a new role; he has done that more than 120 times in the course of his incredible career. What makes this time different is that Domingo, a tenor, is singing a role written for a baritone. This is by no means bizarre, as he is no longer able (having just reached 69 years of age) to sing comfortably at the very top of the tenor range, and passages in the role of Boccanegra that might challenge baritones at the top of their range lie comfortably within Domingo’s tessitura.

It is important to understand that although the casting of Domingo has altered the operatic character of Simon Boccanegra, it does not change either Verdi’s score or Domingo himself, who, of course, remains a tenor. This raises the question of how the change in sonority of Boccanegra’s vocal line affects the audience’s perception of Verdi’s music. Does it undermine the balance of voices, or perhaps improve that balance? Verdi himself was concerned that the original 1857 version of the opera had an over-concentration of low male voices, and in his 1881 revision he made changes in the score to brighten somewhat the sound of the baritone title role, particularly to add contrast in Boccanegra’s encounters with Fiesco, a bass. Might casting a tenor as Boccanegra simply be seen as carrying this effort to its logical conclusion? However one might answer this thorny question, when the particular tenor in question is Plácido Domingo, the result proves quite successful. 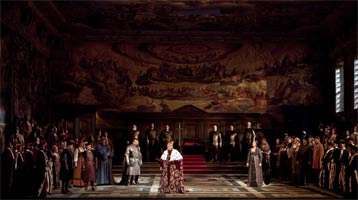 Domingo, despite his advancing years, demonstrated that he remains an artist of the highest calibre. His voice is still a beautiful instrument that is well up to the demands of this role, and his musicianship and stage presence are unimpaired and unexcelled. He was reasonably convincing as a younger man in the ‘Prologue’, in which Boccanegra is proclaimed Doge of Genoa, and quite at home playing that character as closer to his own age in the remainder of the opera, which takes place 25 years later. In the duet in the Grimaldi palace gardens with Amelia (the excellent Adrianne Pieczonka) Domingo’s singing reflected a sense of growing excitement as the Doge discovers that Amelia is his long-lost daughter. Then, after her exit, his sustained “Figlia” was marvellous – tenor-like at the top of the phrase, then falling to a solid baritone sound at the bottom.

In the dramatically powerful Council Chamber scene that ends Act One, Domingo was very much in command both vocally and in his portrayal of the fearless Doge, whose strong will calms the Senators’ bellicosity and pacifies the angry populace. His plea for peace and love (“Plebe! Patrizi! Popolo”) was delivered forcefully and with credible emotion. The opera’s most dramatic moment came as Boccanegra, in a voice that fell to a near-whisper, cursed Paolo for ordering Amelia’s abduction, forcing Paolo to repeat the curse upon his own head. With Paolo cowering in horror, the chorus, repeating the curse in a chilling whisper, advanced toward him menacingly as the curtain fell.

In the final two acts, Domingo portrayed more-vulnerable aspects of the Doge’s character. As he is being overcome by poison in the final act, his arioso “Oh refrigerio! La marina brezza!” – in which the Doge takes comfort from his recollection of his seafaring days – was quite touching, as was his dying plea to the Senators that Gabriele succeed him as Doge. 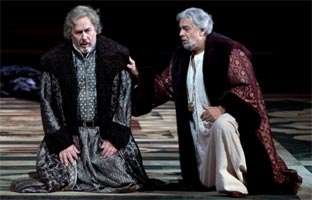 James Morris made a strong Fiesco, his voice seeming to grow in richness as the opera progressed. His confrontations with Domingo were dramatically compelling, beginning with his adamant refusal in the ‘Prologue’ to forgive Boccanegra for fathering an illegitimate child with Fiesco’s daughter Maria, who (as yet unbeknownst to Simon) had just died. In the opera’s concluding scene, Morris was quite effective as Fiesco, at first exulted in Boccanegra’s impending death and then, upon learning of Amelia’s true identity, pardoning the dying Doge.

The main plotlines of the opera focus on how Boccanegra relates to the other characters: his attempts to placate the vengeful Fiesco; his grief at the death of Maria; his paternal love for Amelia; his confrontation and ultimate reconciliation with Gabriele; and his death at the hands of the traitorous Paolo. The love-story of Amelia and Gabriele often feels like little more than an incidental subplot, but it does provide some romantic interludes in an otherwise dark opera. Pieczonka and Marcello Giordani gave creditable performances, but ignited few real sparks until their extended duet in Act Two in which Amelia refuses to disclose her true identity to Gabriele. When that disclosure was finally made, the lovers joined Domingo in the beautiful trio “Perdon, Amelia”, in which the sonority of two tenor voices joining Pieczonka’s soprano worked quite well. 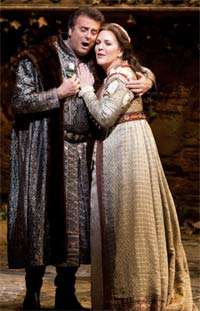 Carfizzi was outstanding as Paolo, a vital character who sets in motion many elements of the opera’s plot. His singing and acting captured the varied aspects of this character – a schemer who brings Boccanegra to power, a frustrated suitor for Amelia’s hand who then masterminds her abduction, and a political assassin who is unrepentant as he faces his imminent execution.

Verdi’s score is a rich combination of his youthful style and the more mature outlook he brought to his revision of the opera nearly 25 years later. Levine all but caressed the opening theme, evocative of the sea, to which Boccanegra feels an affinity even 25 years after foregoing his life as a corsair to become the Doge of Genoa. The Met Orchestra played superbly, with the brass section being particularly effective in setting the scene musically as the curtain rose to reveal the opulent council chamber, and at that scene’s conclusion their tremulous interjections combined with the bass clarinet to create a terrifying mood for the Doge’s dramatically powerful condemnation of Paolo. The Met Chorus was also outstanding in the many choral passages that pervade Verdi’s score.

Giancarlo del Monaco’s production is among the most attractive in the Met’s repertory, with realistic and striking sets and costumes designed by Michael Scott adding a superb visual dimension to the performance. Peter McClintock’s somewhat wooden stage direction is perhaps the weakest aspect of the production, with the brandishing of weapons being rather unconvincing throughout the opera.