The Orchestra of the Metropolitan Opera
Plácido Domingo 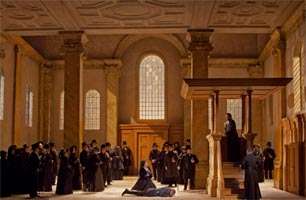 While Verdi’s “Rigoletto”, “Il trovatore” and “La traviata” are amongst the most popular works in the repertoire, “Stiffelio”, immediately preceding this trio in 1850, is almost unknown for reasons which have nothing to do with its musical qualities, but with political censorship. Its plot, the story of a Protestant minister who eventually forgives his unfaithful wife was so unacceptable to the censors in Trieste that they demanded extensive changes. In Verdi’s eyes these ruined the substance of the libretto, hence he withdrew Stiffelio, re-worked part of it into his 1867 opera “Aroldo”, and abandoned the rest. The score was believed to be lost until the 1960s, when manuscript copies of “Stiffelio” and “Guglielmo Wellington” (a non-authentic adaptation) were discovered in Naples and Vienna; a few performances were attempted, but all with censored texts.

It was not until 1993 that a new critical edition was prepared by Kathleen Hansell from a variety of sources – the autograph score of “Aroldo”, the censored manuscripts, and remaining original materials at the composer’s home, Sant’ Agata, which were made available by the Verdi family for the first time. After The Royal Opera (Covent Garden) premiered this ‘new’ score in January 1993, the Metropolitan presented it that same year, and again in 1999, with Plácido Domingo in the title role.

Domingo returned for this revival as well, but this time to conduct, which he has been doing for many years now, but his technical shortcomings are still in evidence. The co-ordination between pit and stage left much to be desired, he frequently brought the orchestra in late, and at the end of Stankar’s aria in the third act things came apart completely for a couple of bars. 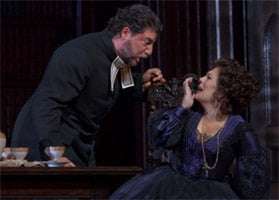 The Argentinean tenor José Cura found himself in the peculiar position of having to sing a rarely performed role conducted by the man most closely identified with it. His voice is on the dark side, almost covered at times, but his dramatic portrayal of the anguished, betrayed minister supplied the intensity sometimes lacking in his vocal delivery.

Sondra Radvanovsky as his wife Lina gave a fine dramatic performance as well, but the palette of her vocal expressiveness is severely limited. She produces plenty of sound, but of a rather strident and piercing kind, and frequently below pitch. One misses roundness and modulation in her voice, and nuanced, controlled softer dynamics.

The most impressive of the major roles was Andrzej Dobber’s Stankar, Lina’s father. Singing with ample resonance as well as expressiveness, the Polish baritone convincingly portrayed the elderly officer obsessed with honor and shamed by his daughter’s infidelity. Michael Fabiano, a bright, lyrical tenor, was the rather shy seducer Raffaele, bass Phillip Ens a stentorian clergyman Jorg, and soprano Jennifer Check was impressive in the small role of cousin Dorotea.

Giancarlo del Monaco’s production, featuring a dark, wood-paneled library for the first and beginning of the last acts, a churchyard for the second, and the interior of a church for the last scene, perfectly conjured up the oppressive atmosphere of the drama. Although there are no arias to whistle on one’s way home, “Stiffelio” is by no means lesser Verdi. It somewhat foreshadows “Otello” in dramatic structure, “La traviata” in the scene between Lina and her father, and the chorus in the last scene is truly extraordinary. Although the subject matter was too radical for the 1850s, nowadays this impressive work surely deserves a place in the repertoire.