Lehár
Die lustige Witwe – Operetta in three Acts with a libretto by Viktor Léon & Leo Stein based on the play L’Attaché d’Ambassade by Henri Meilhac [sung in an English version, newly revised, by Jeremy Sams with English Met titles by Michael Panayos] 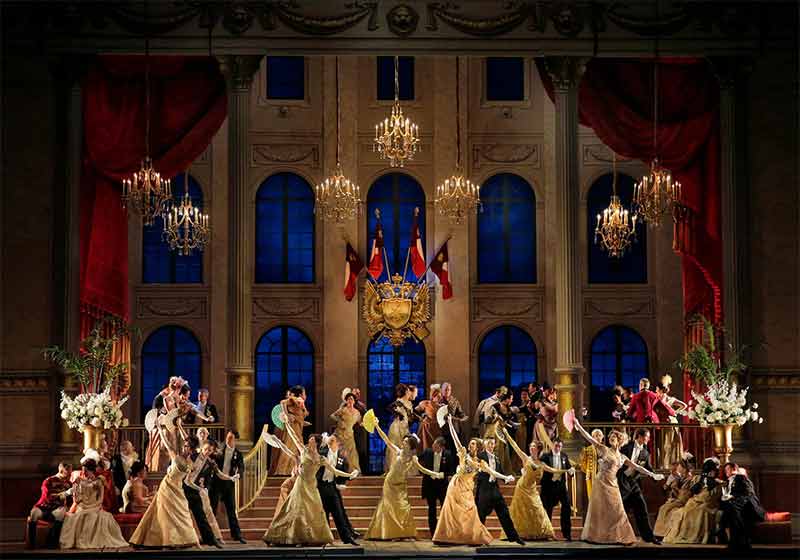 The 1950s were the heyday of the monster movie, but no gigantic or preternatural creature was as frightening as Alfred Hitchcock’s Uncle Charlie, the gregarious killer portrayed by Joseph Cotten in Shadow of a Doubt. This avuncular gentleman strangles his victims while whistling the Merry Widow Waltz, and Hitchcock, who had worked at the UFA studios in Berlin, understood the emotional essence of those peculiarly fin-de-siècle German-language musical-theater pieces popular in Vienna that combined deep disturbance with the most frothy of melodic invention. The film reference is not at all gratuitous when we consider that the Metropolitan Opera has cast one of its megastars as in the title role, putting her in the company of celluloid goddesses Mae Murray, Jeanette MacDonald and Lana Turner.

Renèe Fleming has emphasized her great fondness for the gestalt of this period in Viennese music. At the Met, she was at the top of her game and did not disappoint the entire evening. The plot of the operetta is simple – the impoverished country of Pontevedro will cease to exist unless a native son marries the only woman with enough money to keep it solvent (the exact same premise as the Marx Brothers’ movie Duck Soup). But Fleming’s Hanna Glawari is no Margaret Dumont – she is playing her own complex game. In addition to strong characterization during the spoken parts, Fleming’s control of her extraordinary voice is superb. Her ‘Vilja’ song in Act Two was the undisputed highlight and evoked memories of her highly emotional ‘Song to the Moon’ when she was in the Met’s superb rendition of Dvořák’s Rusalka some seasons ago. (There is also a common Eastern European musical language in the two show-stopping arias.) 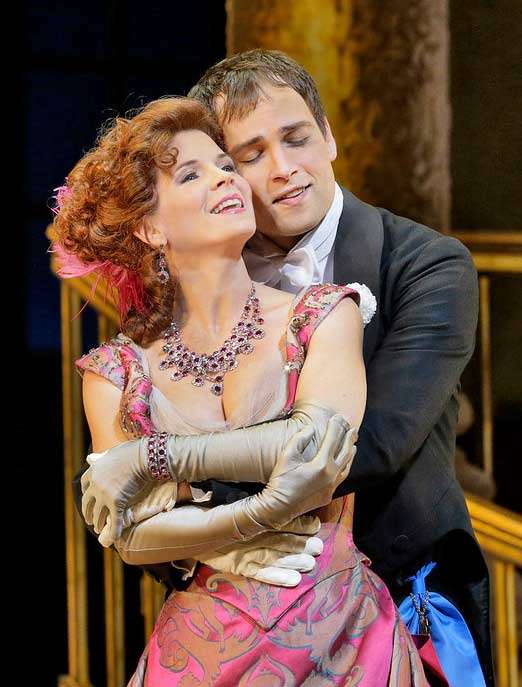 The Merry Widow premiered in 1905. Lehár did not provide an Overture until much later, in 1940. Andrew Davis has provided one “comprising some of Lehár’s major themes from The Merry Widow, using existing orchestral materials.” Sir Andrew kept the excellent Met Orchestra under wraps, perhaps a legitimate approach but an odd choice. The acceptance of the instrumentalists as self-effacing accompanists subdued one significant element of the Lehár universe eliminating the emotional panoply of such devices as the waltz.

It is commonly assumed in the halls of academe that Shostakovich appropriated ‘I’m off to Maxim’s’ for the repetitive ‘invasion’ theme of the first movement of his ‘Leningrad’ Symphony (later parodied by Béla Bartók in the fourth movement of his Concerto for Orchestra), but this critic remains skeptical. In any case, the tune is one of the most memorable in the Lehár score and Nathan Gunn delivered it with considerable skill, both vocal and thespian. He accepted a dangerous challenge and triumphed as he emphasized that his character Danilo is quite inebriated during this moment but could still pull off his pitches with aplomb. Kelli O’Hara was a lively Valencienne, but the performance (sorry, Renée!) goes to the remarkable Thomas Allen who, at 70, was completely dominating while singing the role of the Baron, and was head and shoulders above the rest during the dialogue portions.

This new production by Susan Stroman is delightful because it is brave enough to be traditional. Outdoor scenes are radiant, indoors opulent. The only misstep was the scene at Maxim’s where the dance of the grisettes reminded one less of the Folies Bergère than of Mary Poppins. However, just the fact that the ladies were not done up as car hops on roller skates left me with a warm glow inside. There was though logistical trouble with the set which forced the curtain to come down during the can-can section. This type of snafu is simply a fact of opera life, although it was awkward that an announcement was made that all was about to continue, yet the action did not resume for almost half an hour.

In Central Park there is a grove where the City of New York erected three columns that support busts of composers. The three honorees are Beethoven, Liszt and Victor Herbert. Operetta is rare in our culture these days and that is unfortunate. We should cherish it when it makes one of its precious appearances.