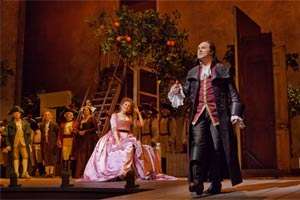 When this most acclaimed of all opera buffas premiered in 1816 in Rome it was a fiasco, not because the opera was awful but because followers of Giovanni Paisiello, who had written an earlier “Il barbiere di Siviglia,” were in the audience and constantly disrupted the performance; but on the second night its brilliance won them over – as it has audiences ever since. Such was the case here.

This production, which premiered in 2006, makes use of many moving parts rapidly pushed about the stage, with the curtain up, by costumed supernumeraries. Nine ample-sized doors compose the main elements on the stage, with the performers constantly moving through the doors. Rarely have I seen an opera at the Met where the performers interacted so intimately with the stage settings, whether it was Figaro entering in Act One on top of his barber shop (a huge wagon pushed and pulled mostly by women), Rosina using a music-stand to help feign interest in a music lesson, Almaviva accidently running into orange trees to hide from Dr Bartolo or Ambrogio pulling a screen painted with clouds across the back of the stage to introduce the ‘Storm Scene’ in Act Two. The lighting and the costumes were very effective and appropriate. 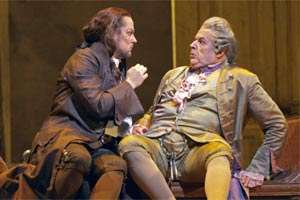 The performers were as much skillful comic actors and actresses as they were singers. Russian baritone Rodion Pogossov as Figaro was admirable. His comic timing was impeccable and his voice was commanding and agile. His interminable energy and superb voice filled the stage with verve and fire-power throughout the performance.

English tenor Barry Banks as Count Almaviva/Lindoro sang with suppleness and refinement, with a voice ringing out high and middle notes effortless and clear. In Act One,/Scene 1, Banks sang the Count’s delicate opening serenade to Rosina in such a beautiful voice that it was obvious that Rosina would be his. Almaviva’s second serenade to Rosina showed a man sick with nerves about his guitar-playing and his singing. 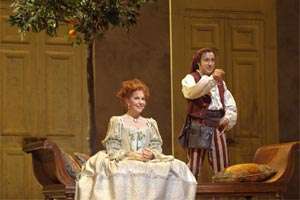 As Rosina, American mezzo Joyce DiDonato was magnificent. Her accurate singing and coloratura with its smooth roulades was thrilling to hear; but she also exhibited credible poignancy where necessary.

American bass-baritone John Del Carlo (Dr Bartolo) was an imposing presence, both physically and vocally; his expressive stentorian voice with its rich timbre was put to full use. Del Carlo sang with passion and solidity necessary to try to convince Rosina that she needed to come up with better excuses regarding her true feelings toward ‘Lindoro’ for someone of his station (the Doctor’s) in life. Del Carlo sang and acted the role of the buffoon perfectly – the consummate Rossinian dupe. 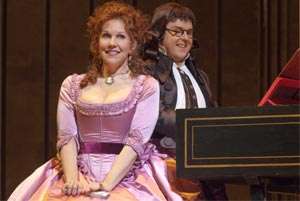 The Greek bass Christophorous Stamboglis, who replaced the indisposed Orlin Anastassov as Don Basilio, sang that character’s signature aria in Act One superbly and in a clear, affecting voice. Basilio’s desire was to create false rumors about the Count to get him out of the way, thus eliminating Bartolo’s main rival for Rosina’s affections. Stamboglis was very convincing in his deviousness. American soprano Claudia Waite (Berta) was a constant humorous presenc with her gliding motion and her invariable sneezing. Wait sang in a luminous voice that elicited the scorn she felt. As Fiorello, American baritone Edward Parks as forceful and bright. The non-singing role of Ambrogio was adeptly performed by American Rob Besserer who made his mark in the world of dance. His lithe movements and humorous body gestures and facial expressions showed his nonverbal genius. His hunchbacked appearance and long white hair brought out the lamentable side of his character.

The members of the chorus were marvelous, whether singing as a band of musicians or performing in the delightful Act One finale. The Orchestra handled the “Rossini crescendo” with great skill and agility; Maurizio Benini conducted a concise, spritely rendering of the opera, while Robert Morrison accompanied skillfully and beautifully on the harpsichord.