Prokofiev
The Gambler – Opera in four acts to a libretto by the composer, based on Fyodor Dostoyevsky’s novella of the same name [sung in Russian with English Met Titles by Christopher Bergen]

The Orchestra of the Metropolitan Opera
Valery Gergiev

“The Gambler” was fraught with bad luck in its early years. While the opera was being rehearsed at the Mariinsky Theatre in St Petersburg for the March 1917 premiere, the February Revolution broke out and forced its cancellation. Later plans to stage the work at the Bolshoi Theatre in Moscow were curtailed in the wake of the 1917 October Revolution. The following year, the disheartened Prokofiev left Russia and stayed abroad until 1927, when he returned for some concert tours. While he was back in his homeland, he persuaded the distinguished director Vsevelod Meyerhold to once again consider staging the piece at the Mariinsky Theatre and began work on a major revision. That production also fell through. The Revised Version did not have its premiere until 1929, when it was mounted (and sung in French) at the Théâtre Royal de la Monnaie in Brussels.

Written when Prokofiev was 25, “The Gambler” was the composer’s first major work for the stage. Its unconventional score displays all the capriciousness and brash irreverence characteristic of Prokofiev’s early work, when he was eager to express himself in the most radical language possible. The piece is set in Dostoyevsky’s time (1865), in and around the casino in “Roulettenberg”, a fictional spa somewhere in Central Europe . The story traces the downfall of Alexei, a young Russian with a gambling addiction who has been engaged as tutor to the children of a retired general, and who is in love with Polina, the general’s ward. Prokofiev’s Expressionistic score shines a merciless light on the group of mostly self-seeking and hypocritical characters who surround Alexei and Polina and are variously obsessed with gambling.

When Valery Gergiev took over the post of principal guest conductor at the Met in 1997, he pledged to introduce seldom-heard Russian operas to New York. This production of “The Gambler”, which had its Met premiere in 2001 (previously performed there in 1975 by the touring Bolshoi Opera), was an early success in Gergiev’s campaign. It was the first Prokofiev opera staged by the Met, and was soon followed by the second, “War and Peace” (also conducted by Gergiev) in 2002. 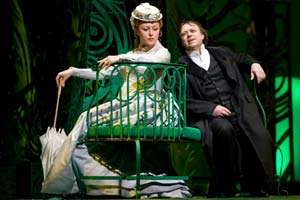 The piece requires an enormous cast: 31 solo roles and four mute characters. It is a challenging opera, full of psychological undercurrents and gratingly dissonant moments. While the story itself is not very complicated, the staged events and the frenetic score are inseparable. For full understanding and enjoyment, the music and the words demand the audience’s complete and unwavering attention. (This was an occasion in which one was extremely grateful for the Met Titles, which were absolutely imperative for non-Russian speakers and anyone unfamiliar with Dostoyevsky’s story.)

This staging of “The Gambler”, with a cast of mostly Russian singers, and a production team from the Mariinsky Theatre, is essentially a Russian show. George Tsypin’s set designs combine the traditional and the modern, using gigantic filigree columns, panels and archways to give a garish look to the spa. A gigantic circle of metal spires and wires (perhaps representing a roulette wheel) is suspended above the stage. Scene changes are marked by shifts in lighting (a combination of bright blues and gambling-table green) and an assortment of nineteenth-century furniture: a few chairs, a table, Alexei’s cot. Giant squiggles of red neon-lighting made a climactic scene at a huge roulette table more reminiscent of Las Vegas than a mittle European casino. 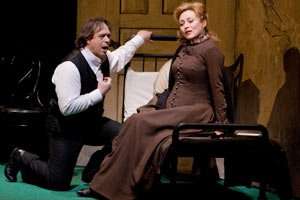 The music and the story move along briskly, halting only occasionally for richly lyrical passages of the type that mark some of Prokofiev’s later works. There are no arias, only a few song-like solos and some rare moments of ensemble vocalization. Inspired by Mussorgsky’s opera “The Marriage”, in which the older composer had attempted to use natural speech rhythms to create individual musical signatures for each character, Prokofiev’s score is most striking for its deft control of orchestral color. The opera is written as an extended recitative in dialogue form, the speech punctuated with sudden shrieks, laughter and other outbursts in the highest and lowest ranges of the human voice. The music and dialogue are always interesting, often humorous.

In this season premiere performance, the Met Orchestra played this idiosyncratic music magnificently and did full justice to Prokofiev’s score. This was in large part due to the presence of Valery Gergiev. The indefatigable conductor was in top form, delivering an incisive and remarkably coherent reading of Prokofiev’s episodic score. Gergiev’s affinity for this music was obvious, and he seemed to infuse the marvellous Met players with his own enthusiasm. The orchestra’s playing could not have been more idiomatic or exhilarating.

For this Met run, five of the principals – Vladimir Galouzine (Alexei), Olga Guryakova (Polina), Sergei Aleksashkin (the General), Nikolai Gassiev (the Marquis) and Olga Savova (Blanche) – are members of Gergiev’s Mariinsky Theatre company and are repeating the roles they performed under him in the Met’s first perfomances in 2001. Another major role, that of Grammy, is also sung by a Mariinsky regular, Larissa Diadkova. In an opera marked by so much idiomatic declamation, having so many roles sung by native speakers was a definite plus. 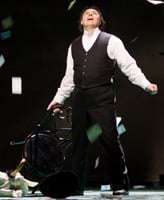 The powerhouse tenor Vladimir Galouzine sang the daunting title role of Alexei with a strong, pungent tone and superb dramatic fervor. As the emotionally conflicted Polina, Olga Guryakova gave a dramatically and musically convincing performance, catching both her character’s desire and disgust for Alexei. Stentorian bass Sergei Aleksashkin was splendidly at home in the role of the General, displaying just the right combination of desperation and self-rightious indignation. Larissa Diadkova was a youngish-looking Grammy, but she imbued the role with an eccentric arrogance, and later, when she loses all her money at the gambling table, stoic resignation. Olga Savova was appropriately coquettish and devious as Blanche. Nikolai Gassiev was a strong-voiced, suitably sleazy Marquis. Standouts among the many smaller roles included Paul Plishka as the blustering Director of the casino, and Ronald Naldi as the First Croupier.

All in all, this was a dazzling performance of Prokofiev’s unconventional and stunningly expressive opera, one of the best things the Met has done this season.