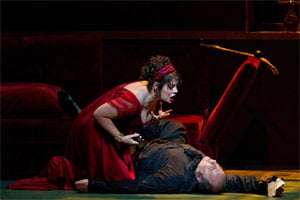 When Luc Bondy’s production of “Tosca” opened the 2009 season, the audience’s strong negative reaction caused quite a stir. In April of 2010, the production was revived, having been substantially revised without Bondy’s involvement. In its cleaned-up version the production was hailed as a success. I have my reservations, however. The spare setting for a church in Act I seem almost medieval, hardly recognizable as a place of worship until the processional of church officials, priests and congregants fills the stage in the last scene. A tasteless combination of bare walls, worn red-velveteen couches and an assortment of wooden chairs graced the stage for Act Two in Scarpia’s apartment in the Farnese Palace; hardly in keeping with the pretentiousness and pomposity of a baron with delusions of grandeur. Bondy’s excuse for eschewing the splendors of church- and palace-décor is that they detract the audience’s attention from the singers. I find such reasoning disingenuous since such bare staging hardly generates any significant insights into either the storyline or the characterizations of the three principal roles. Not even the addition of three sparsely clad prostitutes in Act Two for Scarpia to amuse himself with brings out his lecherous character – he only seems mildly interested in them. 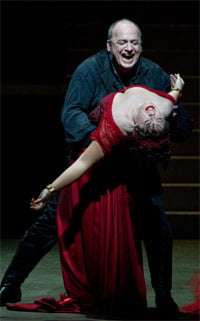 Without reservation, much of the success concerns the three principal singers, particularly Sondra Radvanovsky. She has a strong, radiant voice, particularly firm and lush in the upper register, although her mid-range has a somewhat gruff quality. Her coquettish love-making with Cavaradossi in Act Two ingratiated her to the audience. In this respect, as to some degree in her vocal qualities, she reminds of the young Renata Scotto. Although she seemed slightly reserved at first, by the Act One love-duet she was well into the role. What is most noticeable in Radvanovsky’s portrayal is the remarkable degree of control she exercised in the most terrifying situations. During Act Two she seemed only moderately upset by the tortures inflicted upon Cavaradossi and responded to Scarpia’s sexual advances with little noticeable shock or fear, not to mention disgust, giving in to his unwanted advances without much of a struggle. Then she merely sat down on a couch, a bit too comfortably, and sang beautifully and forcefully, if again somewhat withdrawn emotionally, of her innocent pursuit of love and art (‘Vissi d’arte’). In fact, she seemed rather unaffected emotionally by her brutal (if justifiable) murder of Scarpia, stabbing him six times without much emotion. (One wonders why she used such force, since Scarpia showed no signs of life long before the last jab.). And given her strong religious convictions, she did not display any horror, or even remorse, at what she did; she simply collapsed completely exhausted.

In Act Three, I was most impressed by the vibrancy of her voice in the duet with her lover, concluding with one of the highlights of the evening, a show-stopping unison ‘Trionfal, di nova speme’. But the director’s nuance in having her kick the soldiers down the steps as they chase her after she declaimed ‘O Scarpia, avanti a Dio!’ is misguided, and her death-leap (after much confused searching for a proper place for it) that aborts in mid-air at the blackout, seemed worse than stagey. But it was Radvanovsky’s night, and although she may have yet to find her comfort level in this role and a characterization that fits her personality as well as her character’s, her performance deserves high praise.

Argentinean tenor Marcelo Álvarez is known principally for his Verdian roles but is no newcomer to Puccini or to the role Cavaradossi. He has an elegant, lyric voice reminiscent of Carreras in his prime. He sang ‘Recondita armonia’ with verve, if only moderate intensity, seeming somewhat reserved (he even seemed only slightly concerned about his friend Angelotti’s plight in trying to escape from prison). But in the last act he gave a moving and impressive rendition of E lucevan le stelle that brought the house down. His pre-execution duet with Radvanovsky was certainly “triomfal”!

Few Scarpias look as mean-spirited and act as unreservedly nasty as Falk Struckmann. In church during the first scene of Act One, he maintains a lordly, if pompous, demeanor that gives way to unrestrained lasciviousness in the privacy of his apartment in Act Two. Yet his voice lacks that dark, Erebus-like quality that made such great singers of this role as Tito Gobbi sound deliciously gruesome. Struckmann tried to use his raspy timbre to advantage, but he strained to negotiate the high tessitura called for in ‘Gia, mi dicon venal’.

Paul Plishka, a Met stalwart for more than 40 years, was a witty, bumptious Sacristan. Peter Volpe, Dennis Petersen, and James Courtney, as Sciarrone, all performed admirably. Marco Armiliato conducted a generally vibrant performance that occasionally seemed too restrained and sluggish (particularly at the beginning of Act Two). His respectful subservience of the orchestra to the singers has become a principal characteristic of guest conductors since James Levine took charge. The Met orchestra committed itself splendidly.

Some video clips from the Met’s “Tosca”: