The Orchestra of the Metropolitan Opera
Joseph Colaneri 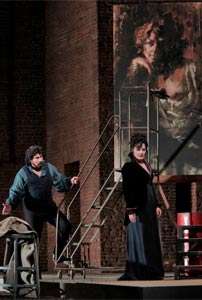 Luc Bondy’s stark new staging of “Tosca” at the Metropolitan Opera replaces Franco Zeffirelli’s lavishly hyper-realistic 1985 production. After nearly a quarter-century, it was probably time to present a fresh, thoughtful take on one of the Met’s staples. Alas, Bondy’s view is neither fresh nor thoughtful enough.

Zeffirelli was meticulous (overly so, some would say) in realizing Puccini’s stage directions, creating 3D picture-postcard settings of Rome’s Church of St Andrea della Valle, the Palazzo Farnese, and the Castel Sant’Angelo – the opera’s specific locales. Bondy and set-designer Richard Peduzzi seem to want to avoid such specificity, though they maintain the Roman setting. Thus the church interior in Act One is dourly plain, furnished mainly with wooden folding chairs and a metallic pulpit that looks rather like a fire escape, yet the structure itself is clearly constructed of Roman brick (as are the chimneys in the otherwise bare set of Act Three). And Scarpia’s apartment in Act Two envisioned as a generically fascistic corner office adorned with classroom-sized maps of Italy. What, if anything, is gained by such timid generalizing? 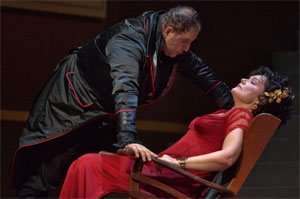 Equally puzzling are some of the gratuitous additions to the staging. The massive (and, here, awkwardly cramped) ‘Te Deum’ scene that closes Act One ends with Scarpia groping a statue of the Madonna (like he’d do this in front of half of Rome). Then, in Act Two, he’s entertaining a trio of prostitutes, including one dressed as Aïda. These accretions may have been intended to enhance the characterization, but they’re more distracting than informative (or interesting).

Similarly, one can understand Bondy’s desire to abandon the tradition (borrowed by Puccini from Sarah Bernhardt’s interpretation of Sardou’s play) of Tosca placing candlesticks beside Scarpia’s body after she kills him. But does it seem plausible that she’d lie around fanning herself instead? After all, she has precious little time before Mario’s scheduled execution; she has blood to wash off her hands as well as preparations to make for their escape.

Musically, the performance made a lot more sense. Karita Mattila is not a traditional, Italianate Tosca. The one time she had to stand and sing, in ‘Vissi d’arte’, I was suddenly aware of some throatiness in her tone and edginess in her high notes. Other than that, though, she made a fabulous Tosca – physically and vocally. Shown the fan supposedly left behind by Cavaradossi’s secret lover, Mattila hurled the name “Attavanti!” like a well-polished spear. And, in Act Two, she conveyed Tosca’s nervousness at being in Scarpia’s clutches through wild (yet still musical) crescendos and effectively exaggerated dynamics. 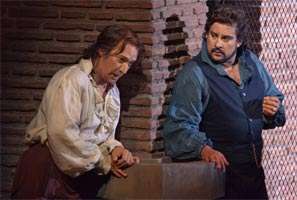 Cavaradossi may be a bit of a stretch for Marcello Álvarez. Despite the consistent and highly appealing sweetness of his tone, the tenor has a tendency to sound short of breath, abruptly ending phrases that should be elegantly tapered. Also, ‘E lucevan le stelle’ should be at once desolate and dreamy; Álvarez was merely matter-of-fact. Still, he came through when it mattered most. His duet with Mattila in Act One was full of ardor, and his cries of “Vittoria!” in Act Two were triumphantly virile.

Carlo Guelfi (filling in for an indisposed George Gagnidze) made a thoroughly monstrous Scarpia. His voice is not quite big enough to ride over the chorus and orchestra in the ‘Te Deum’, and he occasionally resorted to barking and growling, but when he sang his sadistic lines with a smile (which, more often than not, he did), the effect was marvelously chilling.

The Met Orchestra played splendidly for Joseph Colaneri, who stepped in to replace James Levine. (It was announced today – September 29 – that Mr Levine will undergo immediate surgery for a herniated spinal disc, necessitating his withdrawal from scheduled performances with both the Met and the Boston Symphony.) Colaneri favored vigorous tempos, which kept the action moving swiftly, yet he led with a supple hand, and coordination between stage and pit was well-nigh seamless.