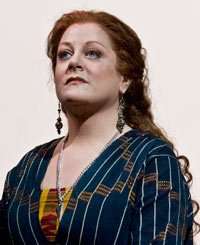 This revival of Dieter Dorn’s 1999 production of “Tristan und Isolde”, last performed here in 2003, features Deborah Voigt singing Isolde for the first time at the Metropolitan Opera. This opening-night performance had also been eagerly anticipated as the quinquennial Met reunion of Voigt and Ben Heppner, today’s reigning Tristan – the duo last performed together here in Berlioz’s “Les Troyens” in 2003 and prior to that in Wagner’s “Lohengrin” in 1998 – but that reunion will have to wait at least a few more days, owing to the illness that prevented Heppner from appearing. He was substituted by his Canadian compatriot John Mac Master, whose two prior performances at the Met were as Canio in Leoncavallo’s “Pagliacci” in 2005. His only past Tristan was at the Welsh National Opera in 2006, which drew less than enthusiastic reviews.

Voigt’s Isolde was a success, but not an unqualified one. She has generally been cautious in deciding when to take on new and challenging roles, and this seems the right time for her to undertake Isolde, to which her voice is now very well suited. She brought power and artistry to the role and was quite thrilling much of the time, yet was less than pitch-perfect, tending to be a bit flat in spots. She gave her all in a very moving ‘Liebestod’, but as a result ran a little short of steam at the very end. As Voigt gains experience in this role, she should develop into an outstanding Isolde.

Mac Master fared less well, although he gave a quite professional performance, with an admirable stage presence that fitted securely into the production. At times – particularly in the first act – he demonstrated the beauty of his voice, but he did not sustain that quality with any degree of consistency, and he also had problems remaining on pitch. As the opera wore on, Mac Master’s voice seemed to wear down, with the greatest difficulty coming in the second act love-duet. In the third act, however, he had enough voice left to give a fairly convincing account of Tristan’s delirium. At the conclusion of the opera, there were some boos for Mac Master, which was unfair and inappropriate. Although Mac Master was engaged as Heppner’s cover and not plucked off the street at the last minute, it is not as if there are world-class Tristans available to sit around waiting for another of their extremely limited number to become indisposed. 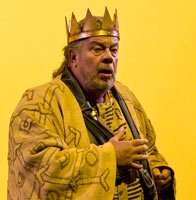 The supporting players were all excellent. Finnish bass Matti Salminen was a strong König Marke, both vocally and dramatically, winning enthusiastic accolades. Michelle DeYoung sang Brangäne with both power and sensitivity, creating a sympathetic character whose dedication to serving her mistress would not permit her to administer the deadly potion that Isolde had called for. As Kurwenal, Eike Wilm Schulte was solid and securely on pitch, bringing an almost heroic vocal quality to the role. Stephen Gaertner was a fine Melot, and there were also excellent contributions from Mark Schowalter as the shepherd, James Courtney as the steersman and Matthew Plenk (in his Met debut) providing the distant voice of a sailor. 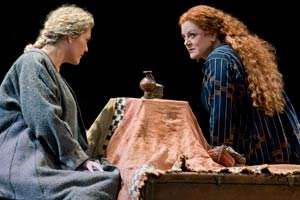 What held the performance together most of all, however, was the superb playing of the Met Orchestra under James Levine’s direction, right from the opening passage that literally sets the tone for the entire opera. Wagner was not afraid to allow a musical idea to develop gradually and to take time to reveal its inner workings and meanings, whether in the opening as Tristan’s ship is sailing toward Cornwall or in the shepherd’s mournful piping, beautifully intoned on the cor anglais, at the start of the final act. Levine recognised this, taking the score in unhurried fashion and allowing each musical idea to blossom at a natural pace. He was also mindful of maintaining an appropriate balance between the orchestra and the singers, only rarely overpowering the vocalists.

Dieter Dorn’s production remains quite pleasing. Jürgen Rose’s sets are generally abstract but with realistic touches. Smooth white wall and ceiling surfaces taper away toward the upstage corner of the diagonally positioned, and steeply raked, stage. Those surfaces take on a wide range of colours as the action of the opera befits – deep blue to represent night, and bright red as Tristan and Isolde drink the love potion. (The latter effect was so sudden and dramatic that it evoked laughter from many in the audience, hardly what lighting-designer Max Keller presumably intended.) Sails and a raised deck transformed the stage into a credible ship in Act One, and the suggestion of trees alongside the tower of König Marke’s castle helped to create an appropriate atmosphere for the lovers’ second-act tryst. In Act Three, however, it made no sense at all to have Tristan and Kurwenal wander around, and tower above, toy-like miniature figures of a castle and equestrian knights that popped up in scattered locations. The costumes, also designed by Rose, were all quite attractive, with Isolde’s appearance made even more dramatic by a voluminous, curly red wig.

There are many who believe that “Tristan und Isolde” is Wagner’s greatest achievement, and some who contend that it is the ultimate opera. This performance cannot be what they had in mind. However, one can hope, indeed expect, that the soon-to-be-realised combination of Voigt and Heppner will produce more memorable performances of this masterpiece.