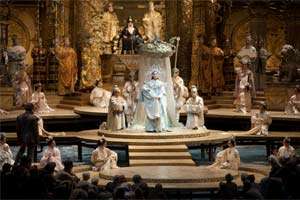 Franco Zeffirelli’s splendiferous production of “Turandot”, which premiered at the Met in 1987, is masterly. The sumptuous sets and scenery are captivating and awe-inspiring, and when combined with the exquisite lighting and delightful multi-hued costumes, the vast Met stage becomes a visual wonderland.

Although Lise Lindstrom’s (Turandot) voice was not always a particularly large one and was shrill-sounding at times (perhaps fitting well with Turandot’s ‘ice maiden’ demeanour), her handling of the difficult but arresting aria, ‘In questa reggia’ in Act Two (Turandot sings nothing in Act One) was superb. She sang the arduous top notes with ease and conviction while holding just the right body-gestures and facial expressions to keep her psychological profile in play – that of an embittered woman who has vowed never to marry and who takes perverse pleasure in having those suitors decapitated who cannot guess her three riddles. For the rest of the evening Lindstrom demonstrated a voice quite capable of imparting dynamic, floated high notes and of adeptly cutting through the agitated orchestral and choral music.

Marcello Giordani (Calàf) sang admirably, except for a few minutes when he was facing the Emperor in Act Two and with his back to the audience; unfortunately, Giordani’s voice did not carry well behind him and out to the audience. But the celebrated ‘Nessun dorma’ was outstanding. Calàf’s extended duet (Alfano’s reconstruction – Puccini died before he could finish “Turandot”) with Turandot in Act Three, ‘Principessa di morte’, was beautifully and powerfully sung. 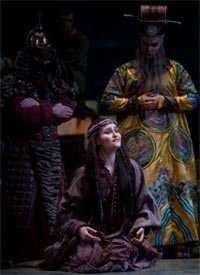 The singer who stole the show, though, was soprano Marina Poplavskaya. Liù’s character is not an ostentatious one, nor is her music, yet Poplavskaya’s sublime use of her accomplished voice was heart-wrenching; Liù’s love for Calàf and devotion to Timur were magnificently rendered by Poplavskaya’s adept and nuanced singing, with her hypnotising pianissimo high notes being especially alluring. Just prior to Liù’s suicide, Poplavskaya exquisitely sang the optimistic but mournful aria, ‘Tu che dí gel seí cinta’ in which Liù states that Turandot will learn love. Not only did Liù’s suicide leave a terrible gap in Timur’s life – she was his guardian and “seeing-eye dog” – but also saddened me to know I would not hear Poplavskaya’s terrifically lovely and expressive voice any more that night.

The Chorus was impressive, its members in full and lustrous voice. All the other performers, and in particular the Three Masks, reminded of Peking Opera – pagentry, acrobatics, colourful masks, dance, haughty characters. This production has it all. Andris Nelsons assertively led an Orchestra well-versed in the simmering and fluctuating passions of the music; all the performers were in perfect sync. After twenty-two years, this production is still a viable powerhouse.