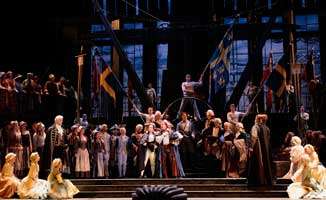 ‘Ballo’ was originally called Gustavo III and was based on the assassination of King Gustavus III of Sweden, who was shot in the back as he attended a ball at the Stockholm Opera House in 1792. Verdi composed the opera for an 1858 premiere at the San Carlo Theatre in Naples. Rehearsals were already underway when an Italian revolutionary attempted to assassinate Napoleon III. Because of the event’s obvious parallel with Verdi’s opera, the Neapolitan authorities asked the composer to set his music to a different libretto. Verdi refused but consented to several largely cosmetic changes before the opera was finally staged in Rome in 1859. 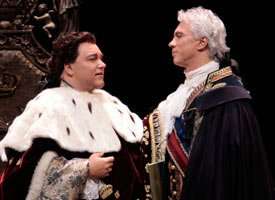 The changes dictated by the Roman censors included transferring the action from royal Sweden to Puritan Boston (!). In the colonial American setting, Gustavo III became Riccardo, Count of Warwick (an English governor). Captain Anckarström, Gustavo’s minister, became Renato, the governor’s secretary, and Counts de Horn and Ribbing were reduced to the rascals Samuel and Tom.

Piero Faggioni created the sets and costumes for the Met’s current production that was originally seen in the 1990-91 season. Faggioni’s staging returns the action to the Swedish court in 1792, as Verdi intended. The Met production restores not only the Swedish settings, but also the Swedish names. In the interests of comprehensibility, this review includes (in brackets) the Italian names most opera-lovers know.

Faggioni’s elaborate sets, framed by a richly rococo proscenium fashioned in green marble, are reminiscent of some of Franco Zeffirelli’s more grandiose inspirations. Ulrica’s cave, for example, is transformed into a giant warehouse at the port of Stockholm, and the interior is dominated by a fiery furnace and a mechanical contraption consisting of gigantic gears, pulleys and counterweights. The final scene at the Royal Opera House (Stockholm) is a showstopping stunner, with a commedia dell’arte mime troupe positioned on a balcony and doubling the main action that takes place below and toward the front of the stage: the fraught encounter between Amelia and Gustavo (Riccardo), the stabbing of Gustavo by Anckarström (Renato), and the dying king’s pardoning of his assassin.

‘Ballo’ is an elegant opera. Filled with wonderful melody and sparking ensembles, it contains some of Verdi’s most powerful and moving music. Among Verdi’s operas it is unusual in being dominated by the tenor, who has a much bigger and more rewarding part than the baritone. The success of the work depends to a large degree on how well the tenor meets the demands of the central role of Gustavo (Riccardo). Salvatore Licitra was there for every moment of this performance, deftly bringing out all the elegance, wit and pathos native to the role of the enlightened Swedish king, from the lyrical romanticism of ‘La rivedrà nell’estasi’, the aria with with which he introduces himself, to his dying utterances of forgiveness for his enemies.

Dmitri Hvorostovsky was a moving and elegant Captain Anckarström (Renato), with his warm and smooth baritone. He made the most of every opportunity to make his character sympathetic, particularly in his taxingly intense Act Three aria ‘Eri tu’. 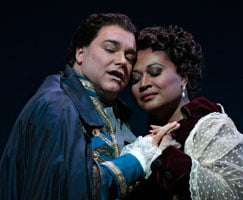 The women were all vocally splendid. As Amelia, Michèle Crider sounded many solidly Verdian notes and strung them together with great passion. She was vocally secure throughout her long and difficult scene at the gallows in Act Two, delivering the demanding top C before the entrance of Anckarström (Renato) completely on pitch. She was especially moving in her Act Three aria, ‘Morro, ma prima in grazia’, her plea to see her son before her husband kills her.

Stephanie Blythe was completely at home in the role of the fortune teller Ulrica and made the most of her Act Two appearance, plunging headlong into her invocation to the spirits of the underworld. Ofelia Sala was completely winning in the delightful, intricately choreographed trouser-role of Oscar the page.

Conductor Gianandrea Noseda led the Metropolitan Orchestra in a highly animated, brisk rendition of Verdi’s magnificent score. The musicians exquisitely handled every note, providing a splendid shade to every detail. The Met chorus was superb, especially in its wonderfully subtle moments at the final curtain.