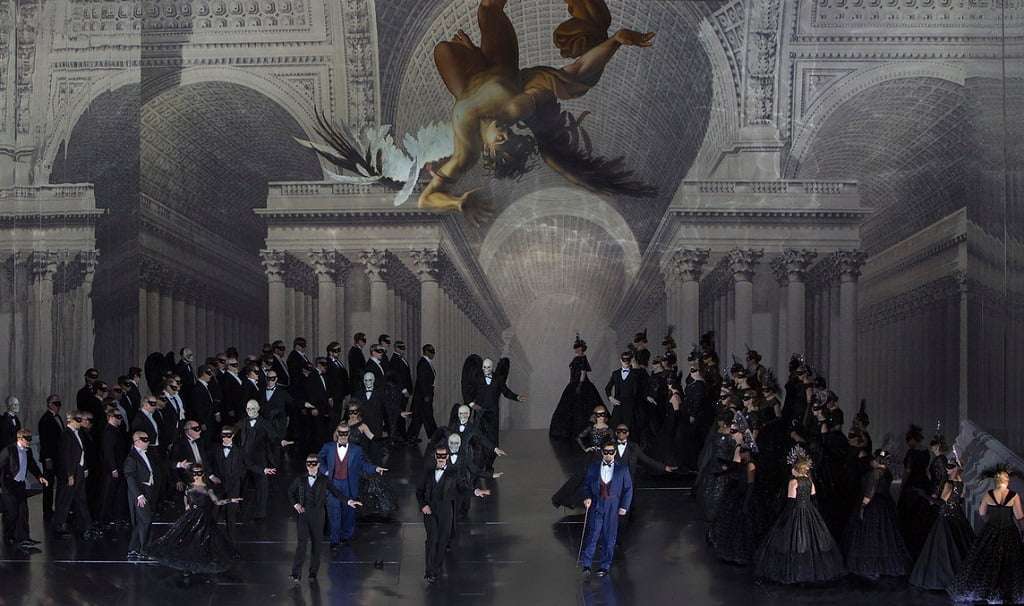 This first-night performance kicked off Metropolitan Opera’s first revival of David Alden’s production of Verdi’s Un ballo in maschera (A Masked Ball), reuniting almost the entire cast of its 2012 premiere; only Piotr Beczala and Heidi Stober were not in the original troupe, and James Levine took the baton from Fabio Luisi.

Un ballo in maschera is based on the assassination of King Gustav III of Sweden by a military officer, Anckarström, during a ball at the Stockholm Opera House in 1792, although its plot adds non-historical elements and sub-plots – most notably a love-affair between Gustavo and Anckarström’s wife, Amelia. Before the premiere at the Teatro San Carlo in Naples in 1858, the Neapolitan censors viewed royal assassination as too politically sensitive, especially since a recent attempt on Napoleon III, and demanded changes that the composer was unwilling to make. Rather than abandon the subject, Verdi moved the premiere to Rome, and to placate the authorities there, transferred the action to puritan Boston, changing King Gustavo into Riccardo, an English colonial governor, and re-naming all of the other characters. That is how the opera has generally been performed – including at the Met until late last century. The current production, like its immediate predecessor (Piero Faggioni’s from 1990), restores the Swedish setting and names, if with angular shapes and film-noir-influenced designs. (The Italian names most opera-lovers know are shown in brackets in the cast listing.) 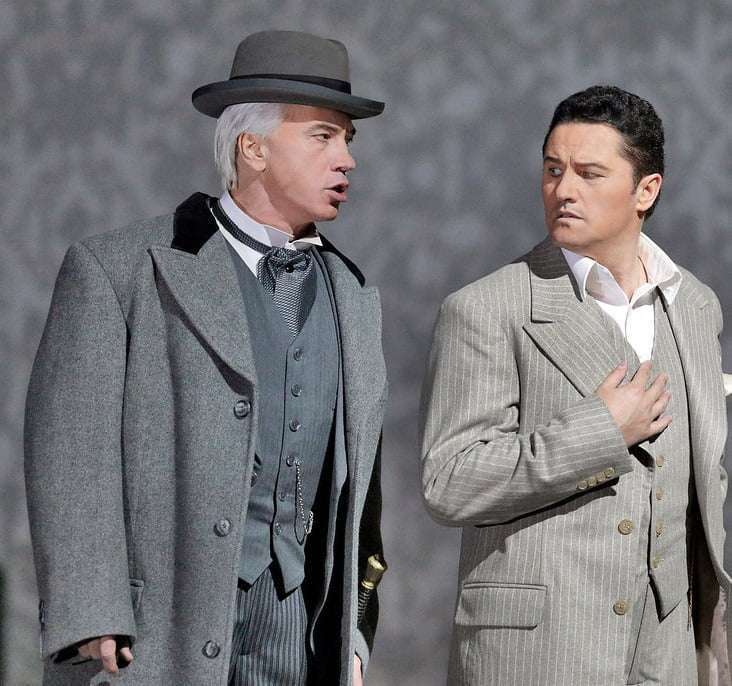 In Alden’s striking staging, blacks, whites and grays dominate Paul Steinberg’s abstract sets and Brigitte Reiffensteul’s stylish costumes. Adam Silverman’s lighting often casts tall shadows against abstract-patterned walls, beginning during the orchestral prelude with a shadow of a winged figure that turns out to be the King’s page, Oscar, costumed in white, miming Icarus who, in Greek mythology, fell to earth when his waxen wings melted by the sun. Alden draws a parallel with Gustavo by suspending above the stage a huge painting of Icarus falling as Apollo in his horse-drawn chariot drives the sun across the heavens. The painting hangs at an odd angle and is tilted variously to mark scene changes and crucial points. An image of Icarus also descends from above during the final scene, the eponymous masked ball, in which tall mirrored walls are now in place. Oscar again wears wings as he delivers Amelia’s warning to Gustavo; then, at the party, he gives away the King’s disguise, enabling Anckarström to stab the monarch. 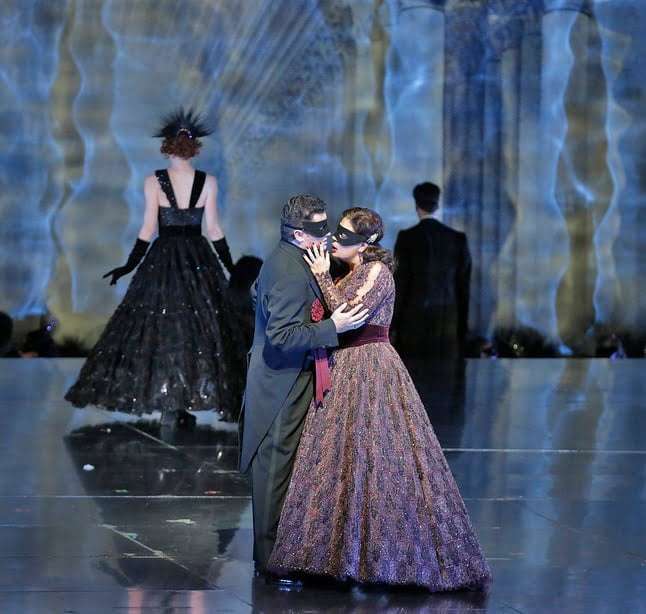 Piotr Beczala was a personable King, vocally thrilling in ‘Di’ tu se fedele’ when, disguised as a sailor, he consults the fortune-teller Ulrica, and later in the touching ‘Ma se m’è forza perditi’ in which he reconciles himself to bidding farewell to Amelia. Sondra Radvanovsky showed off beauty of tone and tremendous vocal power and range in Amelia’s prayer (accompanied by a gorgeous English horn obbligato), and joined with Beczala in an extended love duet in which they began far apart and then come together rapturously. Radvanovsky also was touching in Amelia’s plea to her husband, accompanied by a fine cello solo. This was followed by a gripping rendition of ‘Eri tu’ by Dmitri Hvorostovsky, who excelled throughout as Anckarström, warning Gustavo of plots against him, but later joining the conspirators, Counts Ribbing and Horn (memorably characterized and sung by Keith Miller and David Crawford, respectively), and finally expressing remorse after stabbing the King. (In reality, Anckarström was executed for his deed, not pardoned, as in Verdi’s opera.)

Mezzo-soprano Dolora Zajick was a powerful force of nature in the contralto role of Ulrica as she predicted Gustavo’s impending death, and Stober’s coloratura glistened in the trouser role of Oscar. The rest of the cast was also excellent, with Trevor Scheunemann a particular standout as the mariner Cristiano.

Levine is returning to Ballo since he last conducted it here in 1997. His affinity for and mastery of Verdi’s music was evident as he evoked brilliant playing from the Met Orchestra, bringing out the score’s diversity, from lyrical to dramatic and from comic to tragic. The Met Chorus also performed admirably in a variety of guises, interestingly grouped and moved about the stage, often interwoven with black-clad dancers, whose activities were at times amusing but at others pointlessly distracted from the singers.