Prokofiev
War and Peace – Opera in 13 lyrico-dramatic scenes and a choral epigraph [Libretto by Sergei Prokofiev & Mira Mendelson, after the novel by Leo Tolstoy; sung in Russian with English Met Titles by Sonya Haddad] 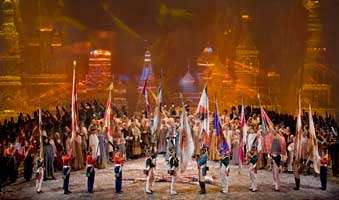 The Metropolitan Opera’s revival of Andrei Konchalovsky’s production of Prokofiev’s “War and Peace”, a co-production with the Mariinsky Theatre, St Petersburg, and conducted by Valery Gergiev, is a spectacular success in virtually every way.

Gergiev led the Met Orchestra and a brilliant international cast in a marvellous performance of Prokofiev’s score and libretto (co-authored by Mira Mendelson, the composer’s mistress who later became his second wife) based upon Leo Tolstoy’s epic novel depicting the opulent world of the Russian aristocracy prior to Napoleon’s invasion of Russia in 1812, and the tragic consequences to both sides as the invading force came to 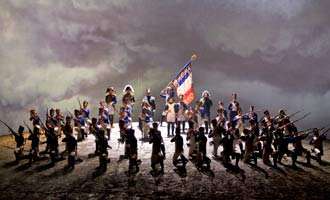 grief and the Russians, although victorious, were forced to abandon and burn their beloved Moscow. In all, there are 52 soloists portraying a total of 68 roles, a 118-voice chorus, 41 ballet dancers, and 227 supernumeraries as soldiers and peasants, outfitted in some 1200 costumes and armed with some 200 swords and 150 rifles.

George Tsypin’s monumental sets provided spectacular settings both for the New Year’s Eve ball in Part 1 (Peace) and the stark, war-torn landscape in Part 2 (War). As tempting as it might be to focus on the sheer size of the production and the spectacle of its sets, costumes and special effects, however, the most remarkable aspects of the performance were the superb musicality of Gergiev’s direction and the brilliant performances of the cast and orchestra.

Gergiev treated every aspect of the score with idiomatic sensitivity and had the Met Orchestra playing at its very best. He brought out the score’s many pungent dissonances and their contrast with more consonant harmonies, as when Prince Andrei first sang of the destruction wrought by the French forces as they advanced toward Moscow, and then assured Count Pierre Bezukhov that the Russian people would be victorious in defending their land. The opera’s love scenes were tender and sweetly expressive, making this aspect of the plot most affecting, and the dances – polonaise, mazurka and waltz – were played with gusto, showing off the corps de ballet to advantage at the New Year’s Eve ball, and later providing wistful recollections of Natasha and Andrei’s first meeting when the waltz theme was reprised. The opera’s numerous chorales conveyed patriotic fervour, and the martial music was quite stirring.

Above all, Gergiev maintained the flow of the music, tying together the parts of this episodic opera into a compelling whole without inflicting significant cuts on the nearly four-hour long work. He did choose to omit the overture, however, beginning immediately with the lyrical first scene, in which Andrei, in the Rostov’s garden on a starry night, overhears the insomniac Natasha and her cousin Sonya sing of the beauties of nature. Gergiev ended Part 1 with the powerful choral epigraph that Prokofiev had written (at the behest of the Soviet Committee on Artistic Affairs) to open the opera. These artistic choices were quite successful, with both halves of the opera ending on a stirring, emotional high-note. 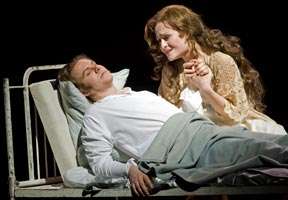 At the centre of the cast, making auspicious Metropolitan Opera debuts, were baritone Alexej Markov as Prince Andrei and soprano Marina Poplavskaya as Natasha. Markov cut a noble figure, dramatically and vocally, in both peace and war. His baritone voice was warm and lyrical in the opera’s opening scene, and he projected charismatic leadership as the head of his regiment. Poplavskaya’s voice was delicate and lovely in duet with mezzo-soprano Ekaterina Semenchuk as Sonya, and bloomed gorgeously as the more mature Natasha in later scenes. She was excellent dramatically in portraying Natasha’s naïve adolescence, youthful womanhood, distress at Anatol’s perfidy, and grief at Andrei’s death. Together, Poplavskaya and Markov were wonderful in the penultimate scene, with Andrei rising from his deathbed to dance a few steps with Natasha as the orchestra reprised their waltz theme, and then dying with Natasha at his side. Natasha stepped backwards on the rotating set to remain at centre-stage as the dead Andrei’s bed moved away from her, bringing the scene to an emotionally powerful end. 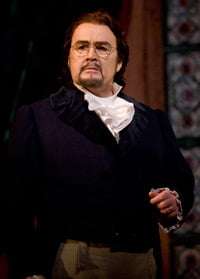 English tenor Kim Begley made an outstanding Pierre Bezukhov, both in his portrayal of an urbane aristocrat and later as a distraught prisoner during the war. His glowing voice projected warmth and friendship in the early scenes, but took on a dramatic edge to express anger directed at his brother-in-law Anatol and desperation when he faced the prospect of imminent death at the hands of the French army. Samuel Ramey was dramatically impressive as Field Marshal Kutuzov, but his constant vibrato, although contributing to his characterization of this heroic figure, was, in a word, excessive.

Effective villainy was provided by Oleg Balashov as the despicable Prince Anatol Kuragin, and by Ekaterina 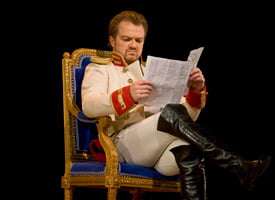 Finally, yielding to the above-mentioned temptation, I cannot say enough about the effectiveness of this spectacular production. Sets, costumes and choreography, as well as lighting, projections and other special effects were all outstanding. The sets, designed by George Tsypin and Eugene Monakhov, were, for the most part, built new for the Met’s stage, which is larger than that of the Mariinsky Theatre. Part 1 was performed on a steeply raked floor that extended beyond the proscenium, with a large rotating central section. This vast space was kept open for the opulent New Year’s Eve ball, beautifully choreographed by Sergei Gritsai. Architectural elements were lowered on wires to create smaller interior spaces in later scenes. In Part 2, the ornate ballroom floor was replaced by battlefield terrain, with the centre section of the stage, topped by a high earthen mound, rotating to move from one scene to another, alternately taking us behind the Russian and French lines. The production utilised its many supernumeraries to great effect, with what seemed like countless contingents of soldiers marching on and off the stage, at times filling the stage with colourful uniforms and standards alongside a large complement of citizen volunteers.

James F. Ingalls’s lighting and Elaine McCarthy’s projections at the rear of the set helped to create a realistic atmosphere in the battleground scenes, as did offstage explosions, accompanied by flashing lights, flying debris and tumbling soldiers. Background projections also were used to depict the burning of Moscow and then its crystalline restoration during the final, victorious chorus. Tatiana Noginova’s designs for the 1200 costumes executed at both the Mariinsky and Met costume shops captured the elegance of the pre-war aristocracy, the spectacular colours of the military forces, and the ragged garb of the peasantry and the bedraggled French soldiers in their pitiful retreat.