The Mikado, or The Town of Titipu – Comic Opera in two Acts to a libretto by W. S. Gilbert with music by Arthur Sullivan, additional to which is a Prologue newly written by David Auxier 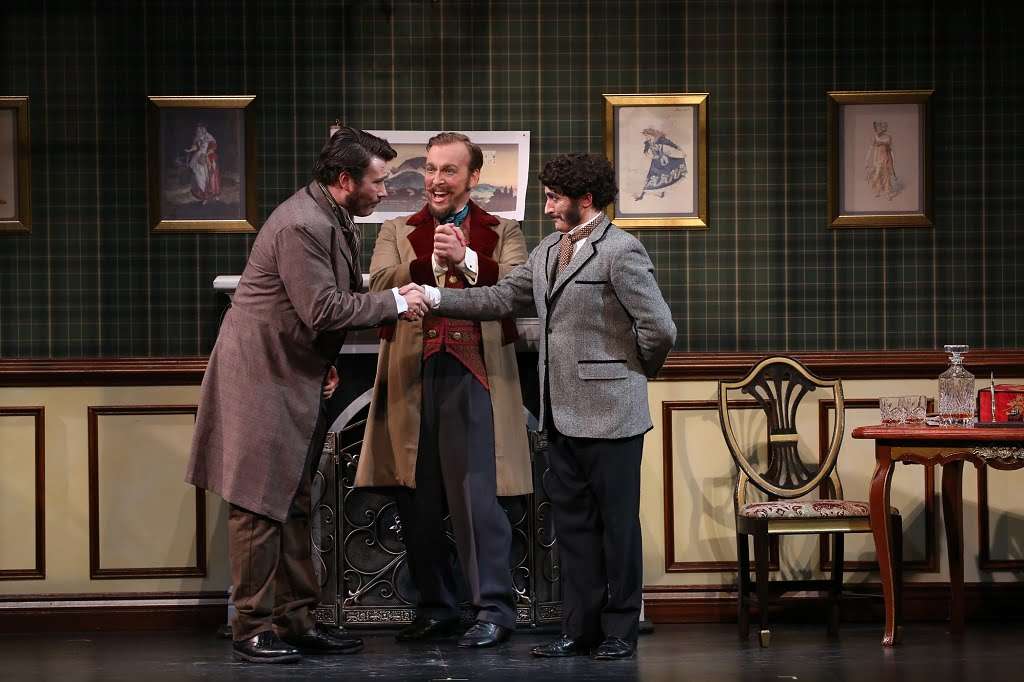 After a flurry of criticism surrounding its decision to present Gilbert & Sullivan’s 1885 The Mikado with Caucasian actors in traditional Japanese make-up and costuming, the New York Gilbert & Sullivan Players decided to cancel its run in the winter of 2015-16. Now, and with an entirely re-imagined take on the iconic operetta, NYGASP offers a delightfully witty production that still manages to preserve the charm of the original.

Following a spirited, if somewhat tinny, reading of the Overture, the staging opens with a Prologue conceived by the show’s director David Auxier. It is set in the offices of the D’Oyly Carte Opera Company, the troupe that premiered all of Gilbert & Sullivan’s works. The creative duo and impresario Richard D’Oyly Carte manage the egos of frantic singers and search in vain for inspiration for their next masterpiece. They then examine Japanese art pieces from an upcoming exhibition, and in a moment of comic hi-jinks, Gilbert is struck on the head by the hilt of a samurai sword. He falls to the floor and the rest of this NYGASP presentation proceeds as a flight of fancy in his subconscious. 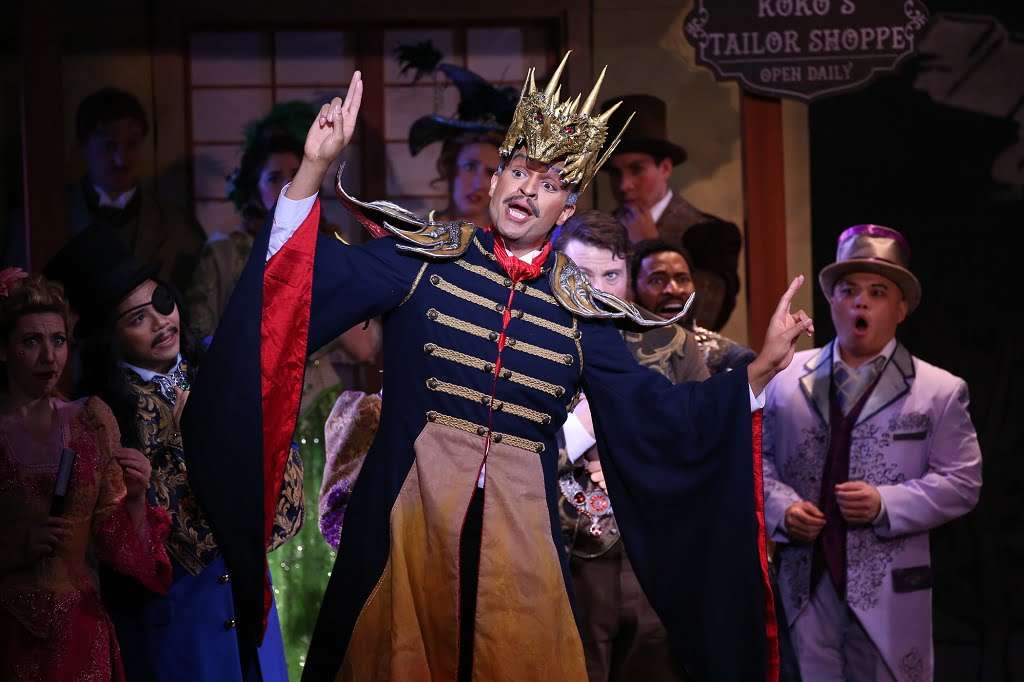 Framed as a confused Victorian interpretation of imperial Japan, Auxier’s staging features splashy scenery that evokes silk paintings and floral fans. But it is Quinto Ott’s Technicolor costuming that delivers most of the whimsy. As Arthur Sullivan notes in the Prologue, “I imagine [Japanese clothing] is not all that different from our own clothing. Just more flowers.” With this in mind, the women wear dresses with high collars and wide bustles fashioned out of resplendent Asian-inspired fabrics. The gentlemen of the Chorus sport elegantly patterned tailcoats while cherry blossoms sprout from the back of Katisha’s gown and the outlandish Pooh-Bah cavorts in an ostentatious beaded headdress. Throughout, the playful outfits enhance the performers’ already animated characterizations.

As Ko-Ko, a quintessential G&S patter role, David Macaluso brought exaggerated gestures, telling facial expressions, and incisive comic timing to the reluctant Lord High Executioner. While his subdued tone sometimes failed to fill out the musical line, what he lacked in strength he compensated with unflagging energy. Ko-Ko and Katisha’s duet, ‘There is beauty in the bellow of the blast’, found Macaluso crawling on all fours before bounding across the stage.

Matthew Wages likewise struggled to project, but in solo moments he displayed a dark, chocolaty sound. Lending a different voice to each of Pooh-Bah’s many dignified government positions, Wages made Gilbert’s complex dialogue crackle, perfectly enunciating each syllable. Like Macaluso, Wages showed himself as a committed actor and exhibited larger-than-life physicality. 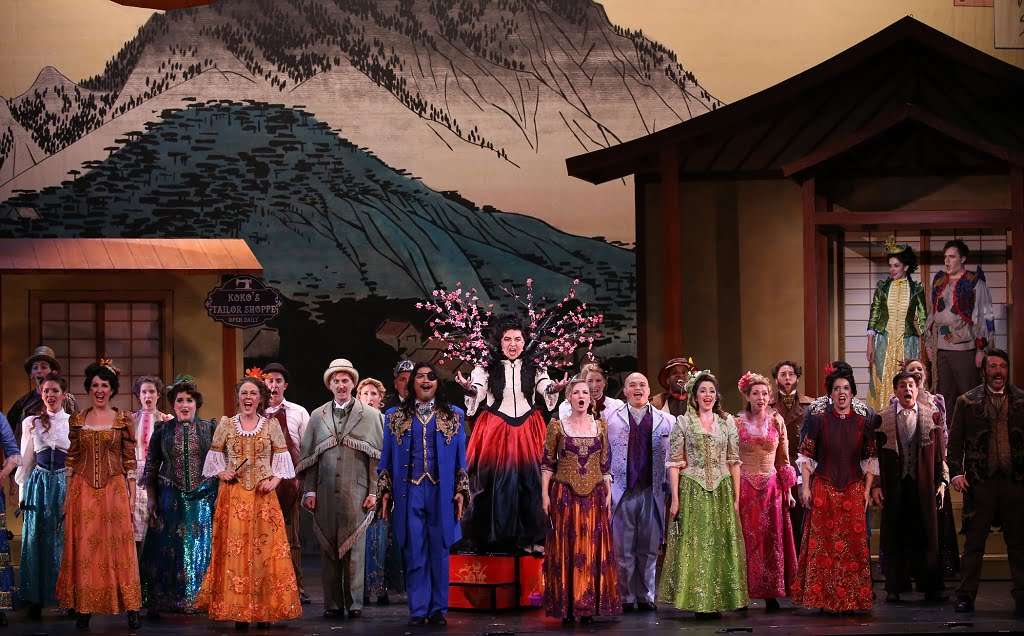 With a creamy and delicate voice, Sarah Caldwell Smith was the adorable ingénue Yum-Yum opposite a bright-toned and ardent Daniel Greenwood as Nanki-Poo. Of all the cast members, Greenwood had the greatest success in filling the theater with his pinging tenor, never straining in the upper register.

Cáitlín Burke lacked the true contralto necessary for the role of Katisha, and while her middle voice was secure and focused, her high notes showed signs of thinning. Still, she matched her colleagues as a clever comedienne, and imbued the ballad ‘Alone, and yet alive’ with genuine emotion.

Towering over the cast, Chris White could be both dignified and zany in the title-role and as Pish-Tush (and the bewildered Gilbert) Joshua Miller sang securely. Amy Maude Helfer and Alexandra Haines brought youthful grace as Yum-Yum’s maiden sisters. The NYGASP Chorus’s great musicality further amplified the mirth as the colorfully clad citizens of Titipu.