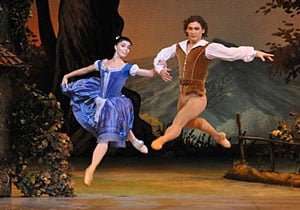 The late Nikita Dolgushin’s 2007 production of Giselle for Saint Petersburg’s Mikhailovsky Ballet company exceeds far more than the hype which justifiably surrounds appearances by ballet’s super-couple Natalia Osipova and Ivan Vasiliev (who performed the first night of the company’s Coliseum season). It is a carefully considered traditional production, which acts as a showcase for dancers up to the very specific demands of this, one of the art form’s oldest surviving works.

Very much up to its demands is husband-and-wife team Leonid Sarafanov and Olesya Novikova, he now a permanent member of the company, having moved across from the Mariinsky, she still a Guest Artist who appears with it with increasing regularity. It would be no exaggeration to say that home British companies would give their eye teeth for dancers of their standing and abilities, such is their economy of means, purity of line and technical mastery. Sarafanov continues to cut a boyish figure; his is very much a traditional danseur noble, ever elegant of gesture, ever beautifully turned out. His emotion is generalised for the most part, and he lacks the searing insight that great dance-actors bring, but he scores highly on sensitive partnering of his Giselle, showing her to her very best, and dancing of such limpid purity as to make one gasp at its beauty. The Count does not dance much, but there are three telling solos which require absolute mastery. This Sarafanov has – his Act Two solo was extraordinarily beautiful, each movement and jump etched with care and artistry. Later, his seemingly unending entrechats six brought gasps from the audience, such was the academic perfection, the height and the fluttering brilliance. 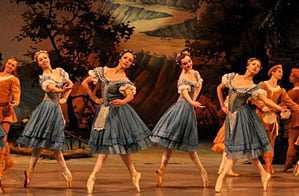 Novikova is in many ways an ideal Giselle – alabaster skin, dark hair, trusting eye, she shyly allows herself to fall in love in Act One, bringing a focussed drama to her encroaching madness at the end of the act, and a terror of impending death in her last moments. In Act Two she is a thistle-down Wili, her jumps astonishingly airy and light, balances effortlessly held. She possesses great technical strength that allows height to her soubresauts and pin-point footwork, which she allies with the most floating of arms. She yearns deeply still for her Count from beyond the grave, her gesture of burying her face in her hands at the very moment of his undoing simple but deeply telling. Underpinning it all is a sensitive musicality that allows the choreography to breathe within Adam’s delightful score. It is a notable portrayal. 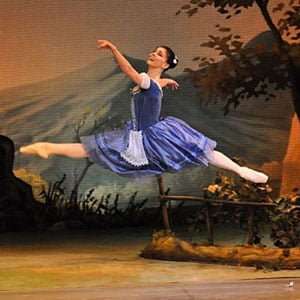 The production showcases their talents admirably, and while the lack of names for other characters indicates their relative lack of importance in the unfolding of a very personal tragedy between the two leads, the company performs well. Irina Koshleva presents a rather soft-grained Queen of the Wilis who commands men to dance to their deaths: her dancing shows grandeur while the corps de ballet are on excellent form as the assembled spirits, cohesive of movement and style, musicality shared.

The stage picture is delightful, nowhere more so than in the woodland glade of Act Two, eerily lit (as only the Russians seem to achieve, while in the UK we contend with gloom and muddy pools of light) and literally enchanting. The final moments of the ballet see dawn rise, the sky above the treetops suffused with pink, and we know that the Count’s life has been saved by the simple village girl he deceived. It is a beautiful moment. I have long admired the company’s orchestra, which plays in such an engaged fashion, brass rich, strings warm, woodwind telling. All praise to Pyotr Danilov’s melting oboe solo. Valery Ovsyanikov conducted with care and flair.