A third of a century after its UK premiere, Des canyons aux étoiles (completed in 1974) returned to the Southbank Centre – for this, the title concert, opening a ten-month series (“From the Canyons to the Stars”) celebrating the music of Olivier Messiaen (1908-1992). The Queen Elizabeth Hall was full to surface tension with suits, frocks and ‘hoodies’ anticipating 100 minutes of uninterrupted Messiaen.

The controlled acoustic of the Hall is well suited for Messiaen’s punctuated and percussive writing, which allowed silences to meaningful – and silent. The Ensemble worked very well indeed, the woodwinds flooding over the strings traversed by directional interjections of tuned percussion to achieve that uniquely Messiaen sonority.

The epitome of the somewhat unusual instrumentation is the wind-machine, supposedly designed to Messiaen’s specific instructions. A little dated, it was something akin to observing the animation in “Jason and the Argonauts” in the light of “The Lord of the Rings”, so much so that it had someone sitting near me in fits of laughter; every time the machine was vigorously activated I anticipated being struck on the chin with the bottom of a window blind. 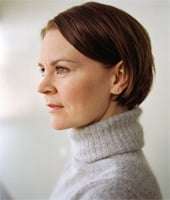 Susanna Mälkki had to work very hard to keep Ensemble Intercontemporain in check. With exact choreography she danced her way through the piece with meticulous spontaneity and summoned a correspondingly precise freedom from the players. This was supported significantly by Pierre-Laurent Aimard, the artistic director of this Messiaen festival; his clarity and assiduousness did not compromise his inherent musicality. I have often thought that Messiaen’s dissonant sonorities are superbly defined by woodwinds, brass and strings; but he shouldn’t have been let near a piano. However, Aimard’s interpretation was as fine as you could wish for; he was a captivating performer; his commitment and energy was fittingly astronomical, and what came across most was a genuine sense that here is a performer who loves Messiaen’s music.

It remains a mystery to me whether Jean-Christophe Vervoitte’s hamming-up of the pauses in the horn solos was genuine or genuine theatre. His phrasing was superlative, his attention to detail magical and – more besides – he was a horn sound-effects maestro! Musically sensitive yet precise is a combination frequently demanded by Messiaen and are traits common to Ensemble Intercontemporain. Samuel Favre and Michel Cerutti were no exception. Tuned percussion is of the utmost importance in this piece (as is frequently the case in Messiaen); Favre and Cerutti did the composer proud.

Des canyons aux étoiles was inspired by Messiaen’s visits to North America, but the work itself is more spiritual than an abstract tour through the continent’s awe-inspiring landscapes “in order to glorify God in all His creation … it is above all a religious work”. Always the “audiornithologist”, Messiaen remained fixated by birdsong (although the woodpecker on wood-blocks is perhaps a shade too literal) and, in his own words, “the majority of the birds are from Utah and the Hawaiian islands”. It is an incredible work, uninterrupted over 90 minutes (allowing for audience-members’ whooping-coughing between sections) and it retains that uniquely Messiaenic characteristic of innate fragmentation that nevertheless manages to express a true musical journey.

I would hate to describe the work as Messiaen édulcoré, but the difference with this late work compared with, say, Chronochromie is characterised by the “Achille-Claude-Darjeeling” effect, and the traditional perfect cadence extended from the emphatic E major chords in Part Two to the concluding bombardment of A major at the end: a latter-day Shostakovich 5. Why these minor 7th and expansive harmonic-sympathetic major chords should represent the final destination in the ascension “from the canyons to the stars – and higher, to the resurrected in Paradise” in this dissonant context is known only to Messiaen. However, my criticisms of the piece – though they are fleeting – cannot detract from the exact, sympathetic and spellbinding performance given by Ensemble Intercontemporain.