I was going to say that the Guildhall School of Music and Drama has moved. In fact it has expanded. Not far though, just across the road from its current and on-going building that nestles into the Barbican Centre. This official opening of Milton Court included a concert, speeches and a tour of the impressive new premises that occupies several floors and includes many spaces for many disciplines; the overall effect is welcoming, spacious, airy and certainly conducive to continued good work, whether music, theatre or dance.

The Concert Hall is impressive visually. It’s a compact shell, with wood (acoustically important) central to the decor. Seating is comfortable, sight-lines are unencumbered, and the acoustic is lively; certainly before a note had been played there was no doubt that the members of the audience were keenly anticipating being part of this ribbon-cutting evening.

It was entirely appropriate that something new should open the concert and the Hall, Julian Philips’s Come Forth to Play, for antiphonal brass groups, with organ and percussion. The horns growled across the divide, and at us, trumpets joined in; this was a slow formation of sounds – ‘the building of the house’, as Britten termed it for The Maltings at Snape – the organ acting independently. If, over five or so minutes, the music didn’t make much headway, save for getting louder, the acoustic was given a going-over, of which more anon. 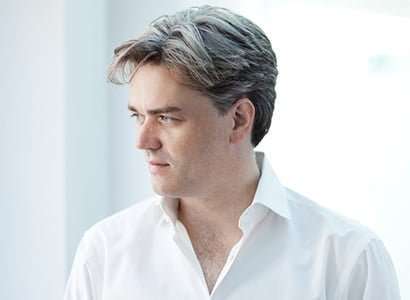 Two soloists then appeared, a high soprano and a trumpeter, similar in register; it would have been interesting to have heard a piano, either instead of one or the other or as a third guest. In many ways the acoustic is glorious, yet Sally Matthews’s voice emerged as slightly coloured and immediately suggested that over-projection can imbalance someone who is at the front of the line with those behind it. She gave outstanding renditions of two Mozart Concert Arias, fully encompassing the different emotions and the many technical demands, yet although the strings were warm and clear, a slight tilt to the treble aside, horns and bassoons were difficult to hear. Solo prominence was more of a problem with Alison Balsom’s forthright way with Haydn, which while dynamic was also piercing at the loudest moments; this time the added orchestral trumpets and timpani broke through. It would appear that ‘less is more’ in Milton Court.

The Elgar required the largest orchestra (only just fitting into the platform) and also provided the biggest challenge of the acoustic. What a masterpiece Cockaigne is, first heard in 1901, at once a portrait of the London Elgar knew and also going beyond such a travelogue. Having been attentive accompanists up to now, the now-full-size Guildhall Symphony Orchestra played a blinder (students as professionals) with expressive, alert, deft and rambunctious execution. Edward Gardner’s tempos were spot-on and he clearly loves the music, not just its razzamatazz but its soul too. The sound was fine, not as ear-splitting as feared and if there could (should) have been even quieter pianissimos, this was a joyous and beautiful performance. If there is a problem with the acoustic it is simply that soloists have no need to sing or play out because what they produce really travels here.

After the resounding end of the Elgar, we stayed in our seats for speeches, including from Barry Ife (Principal of the Guildhall School) and Alderman Roger Gifford (the current Lord Mayor of London) whose wit and comic timing guarantee him a future stand-up career. Honorary Fellowships were conferred upon David McAlpine and Gerald Ronson.

Returning to Milton Court will be a pleasure and it will be interesting to see how the Concert Hall beds down; certainly musicians being subtle and discreet when playing within its walls will pay many dividends.