“Built in 1878 by Aristide Cavaillé-Coll at the Palais du Trocadéro, the organ of the Maurice-Ravel Auditorium was acquired by the city of Lyon in 1977. Made up of 82 stops and 6,508 pipes, it is one of the most beautiful French organs. From April to November 2013, a team of specialists led by Michel Gaillard from the Manufacture Aubertin worked on its restoration. The meticulous work they made turned the hundred year-old organ into a powerful instrument with a perfect tone. For the 2013-2014 season, the Orchestre national de Lyon is rediscovering the symphonic repertoire with organ.” 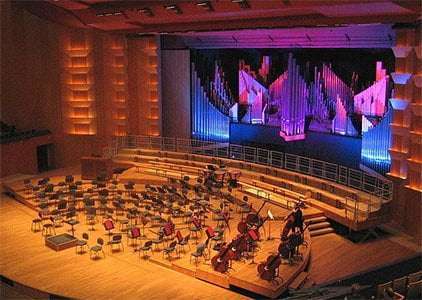 The evening was billed as “Leonard Slatkin pays tribute to the sumptuous organ of the Lyon Auditorium with this 100% French music concert!”. For the first half, the console was located behind the conductor’s back, to his right, with the associated numerous pipes gleaming at the back of the orchestra. From the start the instrument made a convincing tone, throaty in the bass, rich and colourful across the range.

In Camille Saint-Saëns’s Cyprès et Lauriers, written in 1919 to celebrate the end of World War One and an Allied victory, there is nothing in the work’s first part for the orchestra members to do, save sit and listen to the rather severe and mysterious ‘Cypress’ and admire Vincent Warnier’s artistry. ‘Laurels’ is introduced by ceremonial brass and side drum, assertive music including a horn solo (deftly played here), fugal elements, and ultimately a jaunty and rousing finish. Warnier then impressed in Francis Poulenc’s Organ Concerto (completed in 1938). From its arresting opening, through quixotic changes of mood and pace – rampaging, insouciant, sacred, saccharine – the performance reminded what a good piece this is. Warnier played an encore, initially sounding like an improvisation on the Poulenc, a phrasal flourish seemed similar, with a range of effects and whimsical expression through to its grandstanding closing stages. I wonder what it was!

To initiate the concert’s second half, the principal oboist stood to deliver the tune-to A, directing that note to various colleagues. One of Saint-Saëns’s masterpieces was then given with notable accomplishment. This work is saddled in English with being known as the ‘Organ’, simply because the orchestration includes it, sometimes given the excuse to dominate horribly. The composer’s title, “with organ”, is far more accurate and civilised. He conducted the world premiere, in London on 19 May 1886 at St James’s Hall. This ONL outing under Leonard Slatkin (the orchestra’s music director) was very agreeable – well-paced, sensitive and bustling. The organ console had been moved to the side of the orchestra, the instrument only needed in the slow and final movements, darkly supporting in the former and celebratory in the latter. The ONL’s depth of string tone impressed in the Adagio and was serenely beautiful in beatifically prefacing the latter, consistently glowing in the spacious and focussed acoustic, the Auditorium large enough to sit 2,600 people. This was a really impressive and likeable account of music always good to come across, the rendition agile (not least in the scherzo, where the piano makes it first appearance) and hearty, ending joyfully. This incident-packed treat, with plenty of sangfroid and cut and thrust, was very well directed for television and also enjoyed good and faithful sound.