Dvořák composed the song-cycle “Cypresses” as a dedication of love to his piano student, Josefina Cermakova, who rejected him, and he ended up marrying her younger sister Anna. He later arranged twelve songs from the cycle for string quartet. 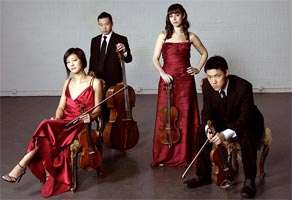 The Parker Quartet performed five of these. The arrangements are simple, leaving melodic material mainly undeveloped and presented by a single instrument. Jessica Bodner brought a warm and tender sound to the viola solo in the first selection, “I Know That on My Love”. Daniel Chong took the lead in the next selection, “Death Reigns”, which is more agitated, and Chong’s beautiful but homogenous tone did not suit it. His unvaried bowing seemed far removed from the required vocal phrasing that inspired this arrangement. “When Thy Sweet Glances” highlighted the impressive lower strings. Bodner’s muted tone remained rich and warm during “Thou Only Dear One,” yet the serene mood was somewhat ruined by Chong’s cheesy upward glissando in an accompanying line. Chong’s tone was cloyingly sweet in the final “Nature Lies Peaceful”. In all, these were confident yet uninspired reading of these unsubstantial arrangements.

György Ligeti’s String Quartet No.1 offered a complete change in character, a motif-developmental composition at its finest, on a par with Beethoven, a single-movement work divided into sections of disparate moods and performed here with youthful passion and intensity and infallible technical skills. From the opening ascending chromatic lines, the musicians’ confidence in phrasing felt as natural as breathing. The ‘Tempo di valse’ segment was thrillingly deranged. In the ‘Prestissimo’, the insect-like creeping of sound grew to a terrifying swarm. Kee-Hyun Kim’s solo towards the end was extremely varied in timbre without sacrificing richness, yet Karen Kim’s subsequent solo was weaker in tonal quality and unvaried in mood; Chong’s following solo passages had the same flaws – In fact, it was difficult to make a distinction between the two violinists’ sound.

Beethoven’s Opus 131 was a fitting choice to follow the Ligeti, with its linked movements of highly contrasting mood. The performance began as a disappointment. The opening introspective fugue meandered without directional intention. The light-hearted second movement was marred by Chong’s thin tone and lack of nuanced phrasing. Dynamics were taken literally in the fourth movement Andante, where motifs were passed robotically between players. Towards the end of this movement the focus seemed to lie solely on the first violin’s melodic line, with little thought to highlight the verticality of the harmonic structure. The scherzo had none of the fiendish brilliance it demands; although rhythmically precise, it felt too cautious, and there was not enough commitment to the wild, bipolar mood-swings required. The players became more alive and empowered in the final two movements. The phrasing was focused and varied in the Adagio, the coloring at last shunning the previous pastel blandness; Chong surprised with a harsher tone in the finale, and his phrasing at-last felt relaxed while maintaining emotional intensity.

The performers made an unusual choice for an encore, the slow movement of Haydn’s ‘Rider’ Quartet. This non-showy movement was lifeless with the players’ safe and literal interpretation, a real disappointment. In music that is less subtle they had shown the potential to dazzle.