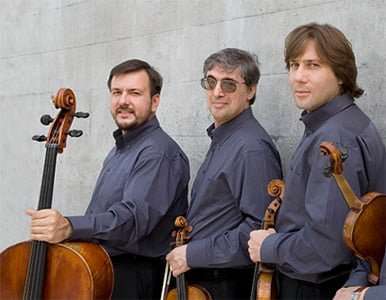 For Shostakovich, even more than for many composers, the string quartet represented a medium into which to pour personal thoughts and feelings. This latest phase of the Southbank Centre’s The Rest is Noise series has reached the 1960s, covering the decade under the theme of “counterculture and revolution”. The selection of string quartets does not so easily fit within that framework. They never served a revolutionary purpose (in either political or musical terms) and the necessarily private and ambiguous manner in which Shostakovich appears to have vented his grief and criticism of the Soviet regime can hardly count as a public or deliberate act of countercultural subversion of the sort in which the enfants terrible of the West were able to indulge. Even so, this is not to denigrate the integrity and intensity of Shostakovich’s artistic achievement and its continuing emotional veracity for a wide spectrum of people however different their circumstances may be from those which Shostakovich endured.

These performances from the Borodin Quartet preserved the sense of these works as personal statements, whatever the original impetus for them may have been. Shostakovich composed No.7 (1960) in memory of his wife, Nina. The opening was undemonstrative and withdrawn, Ruben Aharonian leading the way in a reading that brought out the work’s tense, nervous character, rather than anything darkly humorous or elegiac. The second-violin’s slithery lines and the sparse textures of the Lento maintained this demeanour as though the composer were frozen in terror. The fugue which opens the third movement then unleashed explicit, desperate torment, which the musicians played out with full, unyielding force until the return of material from the first movement, as reticent as before, whilst the hollowness of the final major chord did not really offer much by way of consolation.

This comparative emotional reserve was carried through into the most famous String Quartet of the cycle, No.8 (also 1960). The legato manner of the first movement’s development of the DSCH motif evoked weariness and tragedy, constituting an integrated, but murky, swampy texture from which it seemed that there might be no escape, notwithstanding the more detached and lucid articulation of the Shostakovich motif in a couple of instances. Although the succeeding Allegro molto and Allegretto movements were fast enough, they felt a little too relaxed, lacking the gritty and sardonic edge which it is perhaps nearly impossible to make too grotesque or vulgar. With a return to icy detachment and sorrow in the final two movements – including the first-violin’s haunting long notes denoting the sound of drone aircraft, and a stunning final diminuendo at the end which died away very gradually like a sustained chord on a piano – the performance was intelligent and free from exaggerated, rhetorical gestures, but offered too little contrast with that of No.7.

Greater contrast was reserved for the performance of No.12 (1968) – one of Shostakovich’s more optimistic of the later String Quartets. If there is any triumph though, it only comes after considerable soul-searching and probing, and in this account the momentum confidently built-up at the end of the finale seemed to be not so much an aggressive assertion to the world at large, but an internal, personal resolve to carry on. The cello is put centre-stage in this work, and Vladimir Balshin charted this progress with close and purposeful concentration, starting with an unsettled, questioning opening, introducing the semiquaver figure that takes the work to its eventual climax, and playing the soulful melody at the centre of the finale. Although there are only two movements, they both contain varied sections and constitute almost a fantasia. The Borodin musicians maintained a unified character across these sections so that the final climax emerged as a natural, even inevitable, conclusion, finding in the meantime a wry and witty quality in that all-important semiquaver figure.