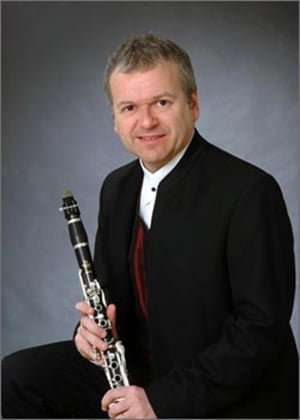 For its contribution to the Southbank Centre’s The Rest is Noise festival, the City of London Sinfonia programmed a concert around the theme of “Music from across the Iron Curtain”, linked also to the life and career of Benjamin Britten. Britten had only recently arrived back in England from his four-year stay in America when the Serenade was composed in 1943. It is in effect a compact anthology of English poetry themed around the end of the day, with the settings framed by a ‘Prologue’ and ‘Epilogue’ for horn, a part that was taken by the 22-year old Dennis Brain.

Ronan Busfield and Stephen Stirling shared a keen understanding of both text and music, Stirling setting the scene with an assured ‘Prologue’ before Busfield entered with a dappled ‘Pastoral’. Michael Collins, without a baton, shaped the strings’ late-evening colours, before they took flight with impressive precision in Tennyson’s ‘Nocturne’. Here Busfield’s higher register was taxed, with a few notes missed, but this was not at the expense of emotional input. The worrisome centre of the cycle, ‘Elegy’ and ‘Dirge’, spread fear and trepidation, especially when Stirling’s snarling horn duelled with the tenor in the latter. The sun reappeared briefly for ‘Hymn’, though here the tenor’s runs were lacking in fluency. Keats’s ‘Sonnet’, however, was beautifully sung, and Stirling, now off-stage, responded with a strangely moving ‘Epilogue’.

Collins then took centre-stage for a pair of works owing their inspiration to Benny Goodman. Britten was to write a concerto for the clarinettist, but the score of the first movement was impounded by the FBI as he and Peter Pears journeyed back to England, and the work was never completed. Colin Matthews, Britten’s assistant in his final years, rescued and completed the first movement before adding two of his own – a finale, based on fragments of an unfinished Sonata for Orchestra, and a slow movement, an arrangement for clarinet and strings of the two-piano Mazurka Elegiaca, Britten’s tribute to Paderewski. Its Chopinesque theme has a grace that Collins exploited in a soft but charming account, marred in the displaced central section by fraught reminders of war.

While Britten stayed in America he developed a friendship with Copland, whose connections with Benny Goodman were longer-lasting and resulted in the Clarinet Concerto of 1948. Copland embraces jazz and swing in this score and Collins was on familiar ground, having lived every nuance of the piece for close on forty years. He was able to cajole the syncopations and jaunty themes of the second movement, leading in with a faultless cadenza, itself on the back of a bittersweet first movement. Collins’s love of the piece was made clear in a short spoken introduction, but he needn’t have worried as his actions did the talking!

The mood turned from affirmation to resignation for the concert’s second half. Shostakovich’s penultimate symphony is dedicated to Britten, and takes its lead in part from his Serenade and also his Nocturne as a themed cycle of poetry. The subject here, however, is death, approached with an emotional flatness that becomes utterly compelling, the music itself hovering on the edge of the abyss. On occasion there is calm acceptance, which the strings sought to find in this performance, but elsewhere the score simmers with anger and confrontation, looking death squarely in the eye. The percussion was vital in these more energetic sections, the precision of Glyn Matthews and Charles Fullbrook admirable throughout.

The soloists were well matched too, after a disparate beginning. Graeme Broadbent studied in Moscow with Evgeny Nesterenko, and recently took the role of Claggart for the first time in a production of Billy Budd at the Mikhailovsky Theatre in St Petersburg. His hollow tone was immediately striking, but Evelina Dobraceva took a little longer to settle, her vibrato initially too wide in her rendition of Lorca’s ‘Malagueña’. Gradually however the performance became increasingly assured, a sense of dread spreading whenever the music was in the lower register – which it frequently is. Here the wiry lines of the lower strings were dominant, and the two double bassists Lynda Houghton and Markus van Horn were particularly impressive, projecting their lines as if a much larger section was playing. Collins conducted impressively, achieving clarity and bite from the strings. Their chorales in ‘Der Tod des Dichters’ swelled briefly, offering chinks of light, but these were snuffed out in the final duet, ‘Schlußstück’.

The only regret for this performance was the lack of text in a programme that included the words for the Britten, and which talked around rather than about the works. Thanks to Broadbent and Dobraceva, however, we were never left in any doubt about Shostakovich’s sentiments.