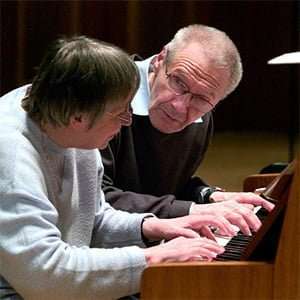 It might have been a mid-afternoon event, though that did not deter a large attendance at one of the signal events during the Southbank Centre’s The Rest is Noise festival – a recital featuring the 87-year-old György Kurtág as composer and pianist in a programme which reaffirmed his standing among the most significant creative figures from the post-war era.

The first half brought the welcome re-hearing (six years after its UK premiere at Wigmore Hall) of Hipartita (2004), the composer’s musical ‘thank you’ to violinist Hiromi Kikuchi for her performances of works that he himself has declared definitive. A thanks from Kurtág is customarily brief, but the eight movements of this work comprise a near 30-minute whole which, complemented by its density of musical thought, makes for an epic however one might care to define it. The sarabande-like gravity of the opening ‘Sostenuto’ is followed by the grating irony of a homage to Arthur Rimbaud, then by the inexorable tread of ‘Oreibasia’ (after the Maenads of Greek mythology) and the expressive austerity of an ‘in memoriam’ to György Gonda. The ironic fatalism of an oblique homage to Heraclitus leads to the fugitive sombreness of ‘Teneramente’, then a ‘Perpetuum mobile’ of unnerving virtuosity generates an inexorable momentum that is carried over into the final ‘Heimweh’ – a homage to fellow-composer Peter Eötvös that forms the raptly inward epilogue. Once again, Hipartita was supremely well realised by Kikuchi – whose gradual progress across the stage, then part of the way back, as she traversed the numerous sheets of score assembled on their stands, provided a telling visual analogy to a musical ‘journey’ which is as emotionally distilled and unequivocal as any created by this most uncompromising of composers.

The second half consisted of extracts from Játékok, for which the composer was joined by his wife Márta. Begun in 1973, the eight books – over 400 pieces to date – of these ‘Games’ are often of extreme brevity, though their range of expression is all-encompassing; music poised between the discipline of an exercise and the spontaneity of a whim: ‘games’ as a battle between technique and inspiration. This recital comprised 21 pieces of around 40 minutes – enough to provide an overview of the expressive territory explored by a diary in sound that has no obvious parallels in its unswerving honesty. Playing on an upright piano with the ‘quiet’ pedal always depressed – as if a private run-through on which the public just happened to be eavesdropping – and with their backs to the audience, the enacting of a ritual was palpable, abetted by each player standing ‘in attendance’ when only one played. Perhaps it was this as much as the music that kept people in its thrall – though after a dispiritingly inattentive first-half, such relative silence was much to be welcomed.

A description of each piece would take far longer to write (and to read!) than to play, so best to point out the 17 items of Játékok were interspersed by four Bach transcriptions of that not only set the overall sequence in a more illuminating context but also enabled the Kurtágs to play as a duo in addition to the two original pieces – an unexpectedly luminous ‘Dirge’ (12) and an arresting ‘Study to Pilinszky’s Hölderlin’ (20). The one premiere was of ‘Ligatura dolce …’ (13), dedicated to Márta, a study for the right-hand as only Kurtág could have realised. The pair responded to the applause with the ingratiating ‘Polonaise’ from Schumann’s Ballszenen (Opus 109) – an unexpected encore, perhaps, though hardly an inapposite one.

All the while, the bust of Beethoven at stage-right had kept watch over proceedings – in anticipation of John Gilhooly’s presentation to Kurtág of the Gold Medal of the Royal Philharmonic Society (currently celebrating its bicentenary). As the composer admitted in his brief reply, words were not his preferred means of expression – so he and Martá responded through a performance of Mozart’s Andante and Variations (K501) which, even allowing for the singular nature of the piano, would have been hard to surpass for poise and insight. Together with Boulez, Kurtág is now the senior Western composer – and, with his Beckett opera Fin de partie scheduled for Salzburg in 2015, his creativity remains undimmed.