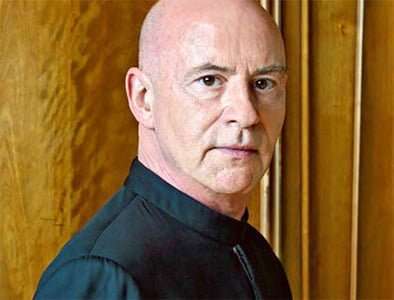 Des canyons aux étoiles (completed in 1974) was Olivier Messiaen’s response to visiting the canyons of Utah and Arizona and reflects some of the composer’s preoccupations – creation, God, the cosmic order, birdsong and colour. Although the composition embraces an array of instrumental effects over the course of about 100 minutes, including the use of the newly invented geophone (sand machine) and blowing through the detached mouthpiece of a trumpet, it can effectively be regarded as chamber music on an extended scale with the orchestra conceived as an ensemble of individual instruments (containing only 13 strings for instance), though still distributed according to their usual groupings.

Christoph Eschenbach held the many disparate elements together in just about all twelve movements and their individual sections, surveying them without a frenetic rush and cogently exploiting the contrasting textures and sonorities of the music. In the opening ‘The Desert’ a clear sense of dialogue was sustained between the unearthly sounds of the piccolo, violin harmonics and bowed crotales, evoking the bareness of open spaces and also anticipating the extra-terrestrial dimension to which the work aspires. Particularly in the final sections of the work’s three structural divisions, which each describe a geographical location, the London Philharmonic and Eschenbach forged the wide-ranging passages into a coherent unity, notably on the part of the strings in ‘Bryce Canyon and the Red-Orange Rocks’, where they contrasted striving music with a lighter, dance-like episode, and a radiant anticipation of the starry realm to which the work would eventually be drawn.

No less of an achievement was the near-flawless execution of the difficult solo parts. After the odd smudged note in the opening horn melody, John Ryan’s playing remained secure, with a steady sequence of changing timbres in ‘Interstellar Call’. Tzimon Barto showed tremendous dexterity in combining force and power (with quite heavy attack in ‘The Mockingbird’ – though dense chords remained nimble) contrasted with delicacy and sensitivity, as in the piano’s graceful answers to the orchestra in ‘The Orioles’.

Ultimately though, for all the LPO’s technical refinement, the performance did not always convince as a spiritual progression from the earthly to the stellar, or from the worldly to the transcendent. Quite often it seemed too brittle and excitable to convey a unified atmosphere of religious or pantheistic awe over its course, the transcription of various birdsongs from South America and Hawaii, for example, sometimes coming close to shrieking. The strings were rarely luscious, and only truly attained a beatific vision of shimmering light in the luminous concluding chords of the seventh and the final movements, rather than developing towards this.

A translucently beautiful yet wearied sonority was created by the oboe’s melody poised over the strings in ‘The Resurrected and the Song of the Star Aldebran’, recalling the mood of Messiaen’s early Les Offrandes oubliées (1930) (and in turn, the world of Parsifal). But such sorrow was an odd response to what should be an expression of rapture by resurrected souls. The brass created a haunting solemnity with their chords cutting through the final chord in ‘What is Written in the Stars…’, but this section was otherwise a little dour in the chorales therein, where one might look back to the chord progressions at the beginning of Messiaen’s orchestral version of L’Ascension (1935) for the sense of tension or hallowed presence that such music can encompass. As with the strings, although the brass captured numerous textures and sonorities, its searing intensity at the outset of the finale did not seem entirely prepared for. This performance contained much that was special and desirable in the realisation of Messiaen’s highly idiomatic music, but it did not quite amount to a fully mystical experience.