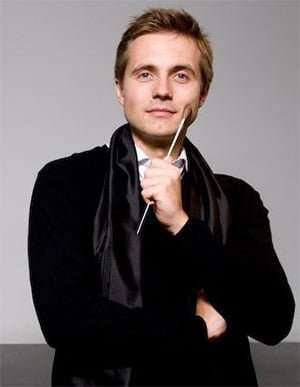 Although the London Philharmonic has occupied the lion’s share of The Rest is Noise festival, it is always good to have visiting orchestras involved – not least the Royal Liverpool Philharmonic, whose rapport with its chief conductor Vasily Petrenko was clear throughout this thought-provoking evening.

The presence of Luciano Berio’s Quattro Versioni Originali della ‘Ritirata notturna di Madrid’ (1975) in so otherwise valedictory a programme might seem puzzling, yet this deft and delightful take on Boccherini’s second most famous movement for string quintet results in a processional both dazzling and (in the most positive sense) insubstantial – with the superimposed variants of the theme underpinned and motivated by percussion to an extent comparable to that in the works which followed. Now that so many concerts do without a curtain-raiser, this piece is most likely heard as an encore (in which guise it has long been a favourite of Riccardo Chailly), so its appearance here can only have made it many more friends.

As has often been remarked this year, Britten wrote very little for orchestra during his maturity such that, despite its not being an original work, the Suite from his final opera Death in Venice (1973) which his protégé Steuart Bedford arranged a decade on slots seamlessly into his output. Proceeding in almost chronological fashion, its 25 minutes constitute a near-perfect summary of the stage-work’s musical and emotional concerns. Thus the seven continuous sections weave the main motifs – whether associated with the psychological state of Aschenbach, the image of Tadzio or the ambience of Venice – into an organic and cumulative whole that gained almost continuously from Petrenko’s probing and insightful direction. The performance benefitted, moreover, from his utilising the full strength of the RLPO strings: while conceived and first played by the English Chamber Orchestra, the present Suite (as also the opera) possesses a tonal richness and expressive immediacy that is only evident when sizable forces are used – thus conveying the whole extent of the music’s ‘presence’.

Shostakovich’s Fifteenth Symphony (1971) is hardly a rarity nowadays, though it remains a difficult work to bring off. Petrenko set a swift tempo for the opening Allegretto such as gave rise to a few passing mishaps – yet the interplay of William Tell allusions and serially derived polyphony was drawn into a convincing whole. If the last degree of desperation was absent from its central climax, the final pages had unflagging resolve. Expansive and long-breathed, the Adagio was finely done – not least its anguished cello soliloquies and the ominous trombone processionals that bring about the searing climax – with tension palpably maintained during the desolate recollection of earlier ideas that sees the movement through to its close. The third was taken very much as a tensile scherzo than a quizzical intermezzo – its deadpan humour not so much played down as given a sardonic and even scatological viciousness. Here, especially, the excellence of the RLPO’s percussion section came into its own as a continuum which holds the sparse musical fabric together.

Performances of this work most often lose focus during the finale. Petrenko risked precisely this by gearing its on-going tempo to that of the central passacaglia with its unyielding tread and remorseless accumulation towards a climax that was here both seismic and unnerving. Elsewhere the dense web of allusions and inferences seemed not so much distant as out of reach, yet there was no doubt as to the conviction of the orchestra’s response or, in the sheer elusiveness of the closing pages, a sense of intangibility that was entirely its own justification. Shostakovich may have ended his symphonic cycle in extreme quietness, but there was no sense of half-close as the music thoughtfully yet intently bid its listeners farewell.

Spoken preambles by conductors are often at best a distraction and at worst an embarrassment, so credit to Petrenko for making his substantial opening address – seemingly given ad lib – as relevant as it was entertaining. In view of the paucity of information in the programme book, both as regards its quantity and its quality, this was welcome.