A varied programme from the London Sinfonietta – all of the pieces in the first half having to do with the revisiting of established (arcane, even?) techniques from a distinctly contemporary perspective. 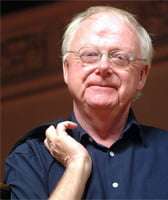 Thus in Zilver (1994), Louis Andriessen has a sustained melody on wind and strings juxtaposed with its faster double on percussion – the former appearing to get faster as the latter does in reality. A simple premise producing an intricate study in cumulative velocity; punctuated by trenchant chordal ‘markers’ that have long been an Andriessen hallmark, and framed by apposite gestures from the ‘silver’ instruments of flute and vibraphone – resulting in music sensuous and stark in equal measure.

Francisco Lara will be a name unfamiliar to many, but the Spanish composer (40 next year) undertook postgraduate studies in London during the 1990s – from which time his concerts of new works and contemporary classics are well remembered. Lara’s own music has not been widely heard here, but Kammerkonzert (2005) suggests a composer adept at integrating the harmonic and – by extension – melodic capacity of overtones with the rhythmic potential of overlapping pulses and variable metres. Allied with a flexible but never unfocussed approach to overall form, the outcome is a piece in which cyclical logic and proportion is never at the expense of oblique or spontaneous gestures – and with an alternation between relative dynamism and stasis that the Sinfonietta players conveyed to the full. The only proviso might be that Lara’s idiom, while highly satisfying on its terms, sounds to be mining territory that was in currency two decades and more ago: ‘old fashioned’ in the true Modernist sense.

Something of which one could never accuse Hans Abrahamsen – whose return to active composition at the start of this decade was a welcome occurrence. Schnee (2006) is the overall title to what will be an extensive series of canons for various ensembles, the first two of which were heard here. What gives these pieces their uniqueness is the way in which they skew the ostensibly rigid unfolding of canonic structure so the process becomes neither linear nor goal-directed and with an instrumentation that is at once fastidious and appropriate to the musical substance, inviting the kind of concentrated listening that more superficially complex music can tend to discourage.

Canon 1 is scored for piano quartet – to which formation Canon 2 adds piccolo, oboe, E flat clarinet and a second piano along with the deft use of percussion and unobtrusive time-keeping of the conductor. Moreover, the tonal intricacy obtained by essentially diatonic means is something many composers seem to be working towards at present, yet without achieving this degree of poise or consistency.

A lengthy first half was followed by a relatively short second, explained by the fact that Simon Holt’s “Sueños” (2006) was a mixed-media presentation which involved staging and video. To be honest, these elements rarely came together in the way surely intended: Julia Bardsley’s projections, though arresting in themselves, were too static in comparison to the fluidity of the music, while Roderick Williams’s attire and belated appearance from behind the gauze screen felt more an affectation than aheightening of dramatic tension. Yet Antonio Machado’s poems are ideal for musical treatment (as Luigi Dallapiccola demonstrated over half-a-century ago) and Holt has, in the main, done them justice.

The five settings are interspersed with three (canonic!) instrumental pieces which serve as interludes which both reflect and anticipate the surrounding songs so that the whole sequence has a cumulative momentum – culminating in the sombre intensity of ‘The Devil’. Both the ensemble writing – with its imaginative use of lower instruments and accordion, and vocal writing – ideally suited to Williams and powerfully rendered by him – found Holt at or near his best, and it was a pity that the presentation tended to hinder appreciation. With Thierry Fischer evincing an undoubted rapport with the Sinfonietta, a repeat performance ‘in the abstract’ will hopefully not be too long in coming.