Joby Talbot
Alice’s Adventures in Wonderland – Ballet in three Acts to choreography by Christopher Wheeldon, based on a scenario by Nicholas Wright, after Lewis Carroll 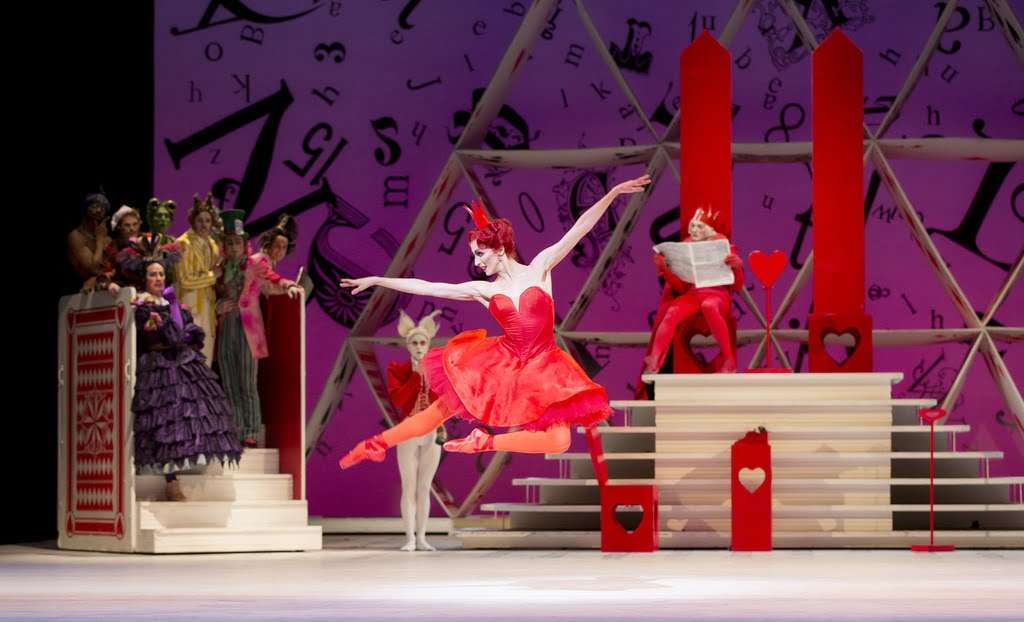 There must be a reason for starting The Royal Ballet’s 2017/18 with Christopher Wheeldon’s sugar-sweet confection Alice’s Adventures in Wonderland, but it is hard to identify. As a statement of intent it would be worrying for its lack of substance, as a showcase for what claims to be one of the world’s premier Classical dance ensembles it provides little in the way of a challenge, as a jewel of the repertoire it is more costume jewellery than dazzling parure.

It started life with a heavy burden of expectation – in 2011 it was the first new full-length ballet created on this company for 16 years, so it was meant to pack a scenic punch. That it most certainly does; bringing in Bob Crowley, of National Theatre, RSC and West End fame as designer ensured a genuine spectacle, with scene after scene of striking imagery, transformations smoothly done, and all complemented by dizzying projections from Jon Driscoll and Gemma Carrington. Costumes are outlandish, over-the-top even, more Toad of Toad Hall than ballet fairyland, but fit in with the concept. 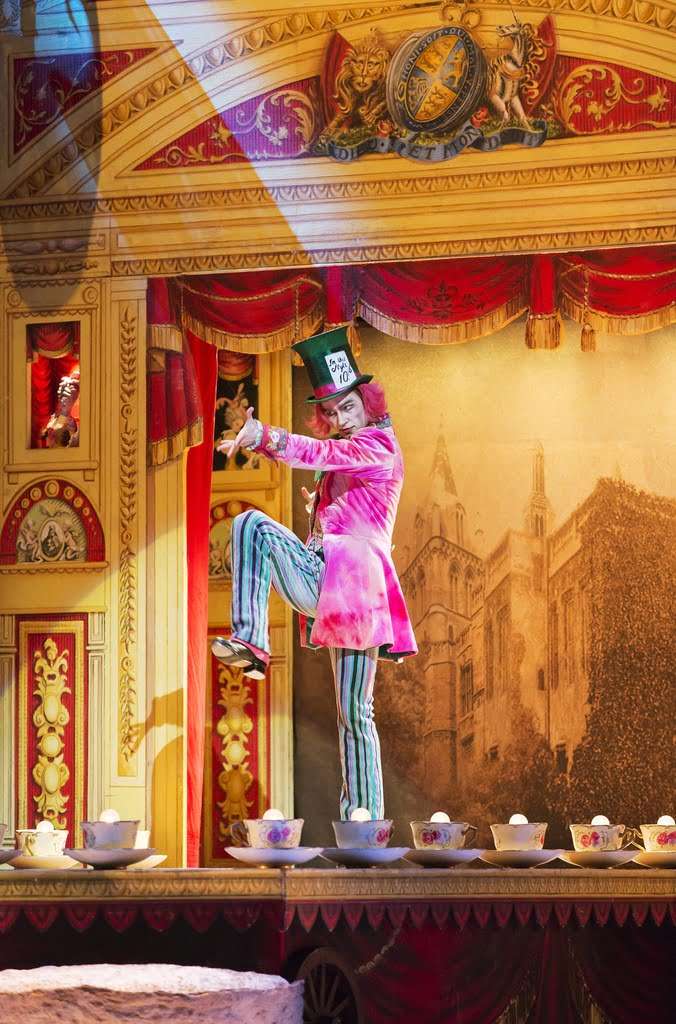 Alice is long; at just shy of three hours, it is simply too drawn-out for what it is. The irony is that it was a two-act show but Wheeldon, in his first revision, split the overlong first half. A successful three-act ballet is a difficult thing to pull off – Frederick Ashton preferred the two-act format because of this and Kenneth MacMillan struggled with often over-complicated narrative. In the case of Alice, a serious weakness is its over-extension. Once Alice falls down the rabbit-hole (here through Lewis Carroll/The White Rabbit’s Gladstone bag) a sequence of vignettes follows, as our heroine moves from one strange set of creatures to the next. An episodic narrative can work, but brevity is usually at the heart of success, and here each scene, most noticeably in Act One, is simply too long. In addition, Joby Talbot’s score, noisily orchestrated by Christopher Austin, is insistent, allowing for far too few moments of auditory respite.

Wheeldon’s movement palette is mostly generic, either ‘comic’ caperings for Carroll’s grotesques or balletic interludes, neither of which, disappointingly, reveal much in themselves about the moods, characters or feelings of the individuals. One needs to look at Ashton’s The Tales of Beatrix Potter to see how heavily-costumed dancers can still achieve such detail purely from the qualities inherent in their movements. There is one extended ballabile or ensemble dance in a Classical vein, affording the company artists a brief chance to flex their finely-honed muscles, but elsewhere there is much that is both undemanding and unexciting. Wheeldon pastiches and references many ballets from the company’s repertoire, from the Red Queen mimicking de Valois’ Black Queen in Checkmate, the ensemble evoking Ashton’s La Valse in the ballabile and the Duchess parodying the Ugly Sisters in his Cinderella to a distinctly Robbins’ The Concert flavour to the Red Queen’s Sleeping Beauty Rose Adagio comic rip-off. It is all good fun in itself, but cannot mask the pedestrian nature of the choreographic invention and the fact that Alice’s often impressive visual façade has very little substance behind it. One dance highlight is a charming and witty trio for the gardeners at the beginning of Act Three, frantically painting all the white roses red, and indulging in fast, darting movement and intricate footwork. The three men were un-named in the programme but deserve mention. 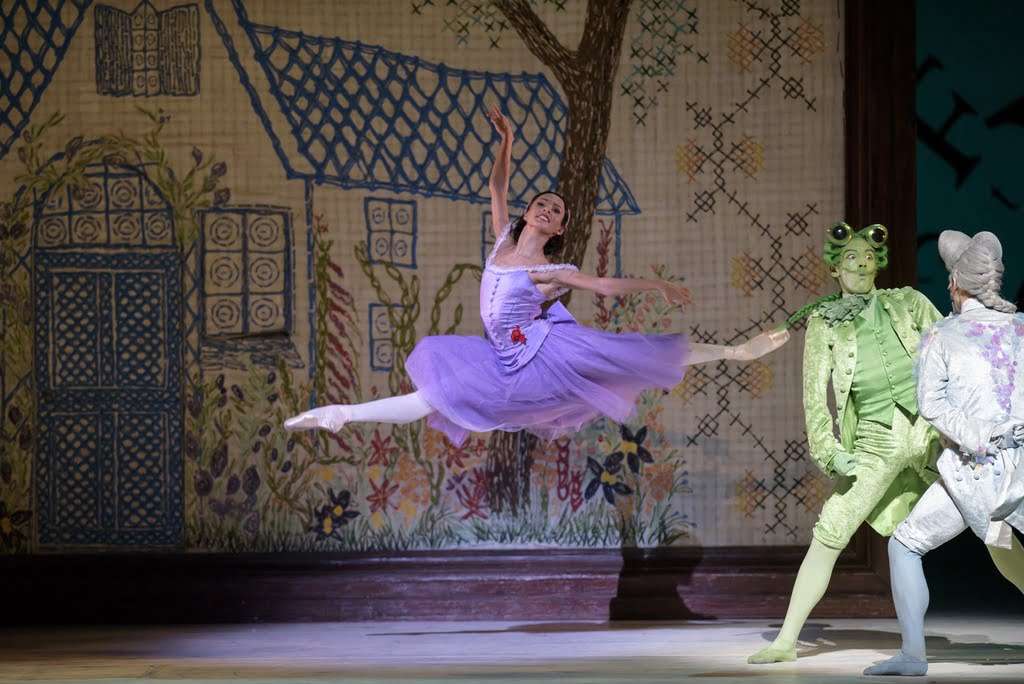 The Royal Ballet performs this work with utter commitment, high quality dancers giving their considerable all to whatever is asked of them. Lauren Cuthbertson created the title role, and continues to bring a lively petulance to her character allied to a strong, clear technique, while Federico Bonelli, who one suspects has discovered the secret of eternal youth, danced with creamy elegance, a prince slumming it as a knave, and partnered Cuthbertson with seemingly effortless insouciance. Laura Morera brought her fine dramatic and comic talents to the Red Queen, while Steven McRae reprised his tap-dancing Mad Hatter – an impressive performance of a tiresome episode.

Ultimately, Wheeldon’s Alice stays resolutely a one-dimensional entertainment and cannot be said to afford the artists roles in which they can grow and develop. This ballet resembles nothing so much as a large, elaborate, multi-coloured confection which looks scrumptious, except that someone has forgotten the filling. It gets three stars … just.