Joby Talbot
Alice’s Adventures in Wonderland – Ballet in two acts to choreography by Christopher Wheeldon, based on a scenario by Nicholas Wright, after Lewis Carroll 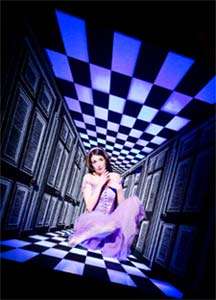 Well, it simply has to be a success – so much has been invested into The Royal Ballet’s new Alice’s Adventures in Wonderland, the first brand-new full-length work for the company in over fifteen years. Does it in reality work? Well, yes, after a fashion.

This is, after all, Monica Mason’s swansong new production ballet, the only one of her tenure as Director, and everything has been thrown at it in order to ensure success: Christopher Wheeldon, the company’s prodigal son, who has forged a career across the Atlantic, was commissioned to choreograph the work; Joby Talbot, composer of the score for Wayne Macgregor‘s impossibly cutting-edge Chroma, has provided the score, and the designer Bob Crowley has provided the brilliant sets and costumes, and there are three casts, each studded with the starriest principals the company possesses. How could anything go wrong? Well, it does not, but neither is it a copper-bottomed hit. 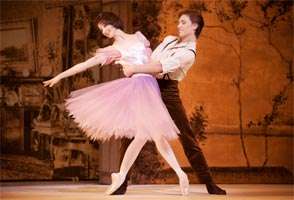 The main weakness lies in the scenario as imagined by Nicholas Wright, which for the length of the overlong first half (seventy minutes) packs in as many incidents as possible from Lewis Carroll’s story, leading to a series of scenic vignettes with Alice doing very little more than Clara in Act II of The Nutcracker when she just sits at the side and watches the divertissements. Each of the episodes after she has fallen into the hole and entered Wonderland is brilliantly realized: Crowley is ably supported by Jon Driscoll and Gemma Carrington’s stunning projections and Natasha Katz’s virtuosic lighting – the Duchess’s kitchen is a nightmarish mise en scène with striking costumes and set, the animals swimming in the lake made of Alice’s tears scenically captivating, and the shrinking and expanding of Alice imaginatively rendered. The highlight is the Cheshire Cat – a magical portrayal using puppetry more familiar from commercial theatre. But there is precious little story to drive the action – once the Prologue of a tea party in Henry Liddell’s garden at Christ Church is over the narrative all but dissipates. The Prologue sets-up the whole story, with all the characters reappearing in Alice’s imagination later, thus Lewis Carroll becomes the White Rabbit, Alice’s mother, the Queen of Hearts etc. This works, to an extent, but this scene of exposition does seem a little laboured in presenting everyone who met later.

Matters look up after the interval, when the narrative ceases its headlong rush through the story and settles on the Queen of Hearts’s garden and croquet game (delightful flamingoes and hedgehogs as mallets and balls) and then the trial of the Knave of Hearts (Alice’s love-interest and, in the Prologue, the gardener’s boy who is sacked by her mother). Alice’s rise back up into the real world returns us to the gardens of Christ Church but in the present day, a neat little twist at the end. 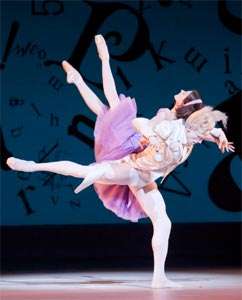 Talbot’s score is effective, his style instantly recognizable if one has heard Chroma – it is generally insistent and, if criticism is to be made, rarely gives the audience time to breathe; it powers on, heavy on percussion, and moments of stillness are rare indeed. As such it falls short of being a great score for the dance, however good some of its constituent parts may be. Barry Wordsworth gives his heart and soul to it though, and elicits impassioned and exciting playing from an energised orchestra.

And so to choreography. Wheeldon has a proven track-record in short abstract works, but, the reception received by his versions of the ‘classics’ – Swan Lake and The Sleeping Beauty – has been somewhat more muted, his tendency towards narrative fussiness and, indeed, fuzziness, has been highlighted by colleagues abroad. In this, his first commissioned new ballet, he shows both his strengths and weaknesses: he is a fluent choreographer with a developed sense of the stage-picture and elements of movement all his own, but is one who does not as yet manage, as the greatest of dance creators succeed in doing, to suffuse movement with character – here in Alice he relies on costume and situation, and without them, I suspect, it would be very difficult to say very much about the nature of the character if the steps were danced in plain, practice clothes. The one exception is the White Rabbit’s solo before the trial of the Knave of Hearts: a fast, twitchy section which conveys much about The White Rabbit in a way that others do not enjoy (Edward Watson is quite superb in the role). Another section stands out, too: the quicksilver steps given to the three gardeners who have to paint the white roses red (here James Hay stood out in a classy trio) and what made this short number notable was the easy fluency of the choreography and the light-handedness of the comedy – this was identifiably in the ‘English’ tradition, where so much is not. Alice’s solos, and, indeed, pas de deux with the Knave, are again fluent, but seem over-fussy – rarely is beauty of line or movement highlighted, whereas a more quirky, jerky style is adopted. That is, in part, Wheeldon’s style – he is not a lyrical choreographer, preferring something slightly harder which then makes a love duet more difficult to believe – the movements are simply not those of ‘love’. 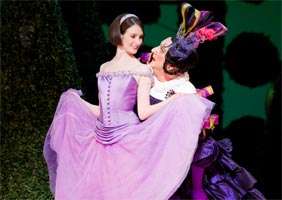 In the lead roles, Lauren Cuthbertson is a delight, relishing such a large role, which sees her rarely leave the stage – a pity that what she was given to do was not quite as meaty as it could have been either in terms of establishing character, or developing it and in term of pure dancing. Sergei Polunin dutifully soared through his jumps and partnered her sympathetically, but he, too, has little with which to work. Wheeldon has packed this work with so many references to older ballets in the company’s repertoire that it struck me as trying just that little bit too hard to establish Alice as the next in an illustrious line of great works: I espied obvious references to Petipa’s The Sleeping Beauty and La Bayadère, de Valois’s Checkmate, Ashton’s Ondine, la Fille mal gardée and Macmillan’s Rite of Spring. The whole Prologue is very close to Ashton’s Enigma Variations in style and look, and to his A Wedding Bouquet in spirit. 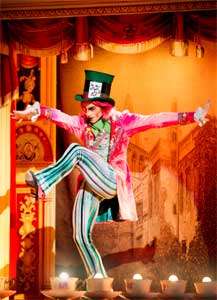 Elsewhere he has chosen to go down the path of grotesquerie, nowhere more so than with the Queen of Hearts (a viciously comic Zenaida Yanowsky) whose movements are all pastiches of Classical Ballet; indeed, her Rose Adagio spoof (funny in its own way) could be lifted lock, stock and barrel and delivered into the repertoire of the Trocks, such is its broad humour – grinning, grimacing and gurning. Wheeldon secured the services of one of the country’s finest classical actors, Simon Russell Beale, to ham-and–camp as The Duchess – he is amusing, but it is difficult to see quite what more the great SRB brings to it (other than the fun of seeing the SRB ham and camp as The Duchess) than would be brought by a member of the resident ballet company. I also pity the company dancers for whom the 2010-11 season must resemble an extended trip to London Zoo – they seem to spend far more time in animal costumes of fur and feathers than in tights and tutus. Quite what they think of having spent at least ten years training to join one of the world’s premier Classical Ballet companies only to play a mouse or a frog or a hare I dread to think, but to have scheduled not only Alice with all its prancing fantasy fauna but also the Tales of Beatrix Potter and David Bintley’s Still Life at the Penguin Café seems a trifle excessive. Even in the most Classical sections, the Waltz of the Flowers and the cards divertissement, Wheeldon seems more focused on moving large numbers around than creating beautiful movement or displaying pure line.

And so to my real concern, which has little to do with Wheeldon and his undoubted crowd-pleaser: is this the sort of thing that The Royal Ballet should be presenting at this moment? Jennifer Homans, the American writer, caused upset with her assertion in her recent book “Apollo’s Angels” that: ‘ballet is dead’. I have a sneaking suspicion that this new Alice does very little, if anything at all, to refute that assertion. It is almost that the Classical Ballet idiom is not one in which even its practitioners now have full confidence: dancers need to dressed up in complicated costumes, surrounded by astonishing stagecraft and to pretend to be animals and grotesques to convince on the stage, and that the purity of movement and line associated with it must be mixed, cocktail-like, with pantomime drag-and-tap dancing (a cruelly underused Steven McRae is a Mad Hatter in tap shoes).

I was strangely reminded of the now-famous evening in April 1946 when Robert Helpmann’s Adam Zero, a laboured, overly complicated and over-designed work, came head-to-head with Frederick Ashton’s Symphonic Variations, his blueprint for the English Classical Style – Adam Zero soon disappeared from the repertoire and Symphonic Variations stands still peerless. In order to answer Homans’s depressing assertion, we sorely need another Ashton. As I watched Alice, I saw an expensive and richly dressed entertainment, a ballet à spectacle, also reminiscent of those grand shows of the beginning of the twentieth century such as Excelsior, and then my mind turned Mikhail Fokine and the revolution in ballet that his Chopiniana (Les Sylphides) engendered, the whole Diaghilev experiment which shaped Western ballet, and then the post-Diaghilev experience: Léonide Massine’s symphonic ballets; Antony Tudor’s psychological works, which fed directly into Kenneth Macmillan’s dark dance world; of Frederick Ashton’s theatrically inspired narrative works and pristine lyricism in abstract dance; George Balanchine’s new-minted neo-classicism. I then wondered if we are now returning to those pre-Fokine days – entertainment at all costs. Alice entertains, for sure, but does it do anything else?