Coming hot on the heels of The Royal Ballet’s Frederick Ashton programme, a new Mixed Bill very much as a statement of intent: new work firmly to the fore. Would that the latter possessed the same quality, artistry and sheer brilliance of the former, but choreographic geniuses are by definition few and far between, which it would be churlish not to accept. Kim Brandstrup, Liam Scarlett and Christopher Wheeldon are all notable creators of dance, and it is an affirmation of this company’s standing that they are all regular collaborators. However, what on paper promised much in fact only delivered in part. 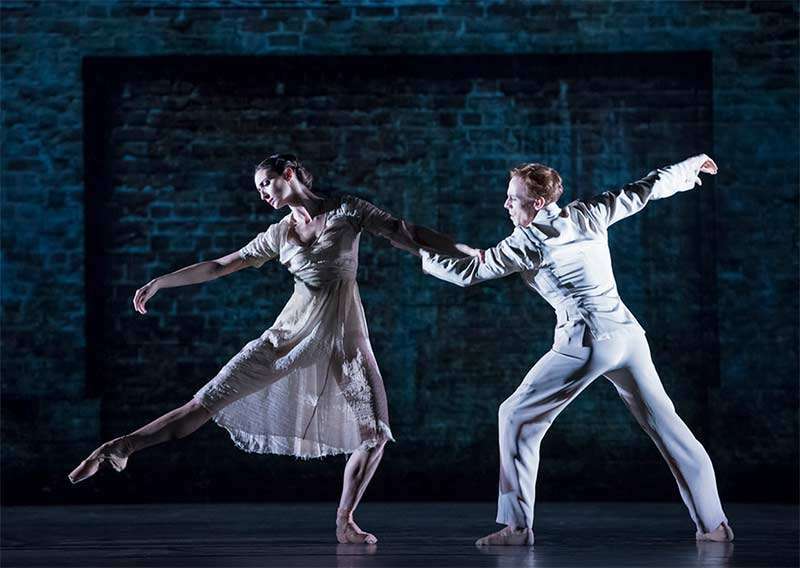 I have long admired Brandstrup’s intelligence, sensitivity and focus, but Ceremony of Innocence, premiered last year at the Aldeburgh Fesitval, makes an uneasy transition to The Royal Ballet’s home. The potency of this examination of the psyche of the artist (an underused Edward Watson interacting with his former-self in the form of the sparky young Marcellino Sambé) is somewhat dissipated on this large expanse, Leo Warner’s projections effective, but whose full effect with rolling waves pouring out over the stage floor, for instance, is only fully appreciable from the upper reaches of the House. What is clearly intense and focussed movement is also somewhat lost, except for Sambé who is given ample opportunity to bounce, bound and turn as the young man. An accomplished quartet of happy dancers appears at junctures to lighten the atmosphere, but the prevailing mood is one of wistful mournfulness, the elegant and generous Christina Arestis suitably maternal to Watson’s tortured artist. The work is almost swamped by Britten’s Variations on a Theme of Frank Bridge, here securely played by the Opera House orchestra, and Brandstrup’s detailed work is often lost.

Wheeldon’s Aeternum, another 2013 creation, here receiving its first revival, is a brave stab at creating movement to Britten’s powerful Sinfonia da Requiem. Marianela Nuñez, saved in this revival from embarrassment by a change in costuming, moves with grace and meaning from the opening moments when her prone body is revealed to the final celestial pas de deux with the elegant Federico Bonelli, all slicked-back hair, bare chest and sateen pants. It ends with them making their way upstage to the closing moments of the score, very much in the fashion of the final ‘ewig’ of Kenneth MacMillan’s Song of the Earth. Nuñez is the work’s soulful core, but Wheeldon is uncharacteristically messy in his stage patterning for the attendant corps de ballet members, who are not helped either by over-fussy and unflattering costuming (James Hay just about overcame his in a rubber-limbed virtuosic central section). Jean-Marc Puissant’s hanging set of balsa wood strips, reminiscent of glued wings and feathers, is striking as it twists forward and rises slowly. 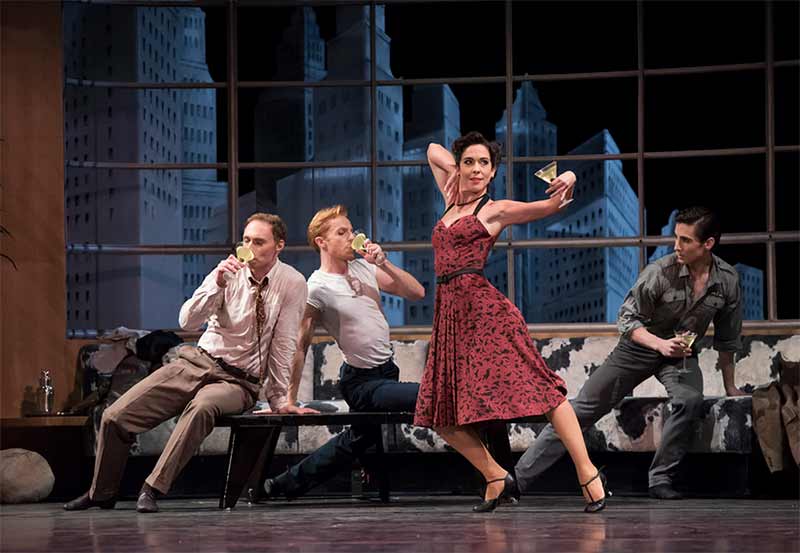 The big news is Scarlett’s new work The Age of Anxiety, set to Leonard Bernstein’s symphony of the same name, itself inspired by W. H. Auden, and proving to be a real hit. Auden’s 1948 Pullitzer Prize-winning poem deals with four characters who meet in bar and, drawn together in their solitude, get steadily drunk with each other, first there and then in the female character Rosetta’s apartment. Scarlett has taken this as a springboard for a ballet of uncommon intelligence and subtlety. The First Scene’s bar-room setting (John MacFarlane’s set here and those throughout are superb) and precise 1940s period remind the ballet-goer of Jerome Robbins’s Fancy Free and Antony Tudor’s The Judgment of Paris, but this is something quite new. From the moment that Kevin Emerton’s bartender clicks his fingers to bring the room and the four characters to life, we enter a magic realist world in which time sometimes stands still, characters leave themselves to express internal emotions and desires, and an apotheosis set in the idealised modern city takes place.

Scarlett has chosen four artists of uncommon talent: Bennet Gartside, as the older Irish salesman Quant, is tinged with unfulfilled dreams – his unrequited kiss of Tristan Dyer’s Malin shows what lies deep below. Indeed, the whole atmosphere is drenched with unfulfilled sexual longing – Laura Morera’s superlative Rosetta, kicking up a storm in her own apartment, wants but never gets Steven McRae’s swaggering sailor boy Emble whose own sexual interests are not solely confined to women. He flirts with and smoulders at Malin, giving the young man just enough to enflame his desire, and it is Malin, who from the very first moment shows where his preferences lie, who becomes almost the central character of this intriguing and carefully constructed narrative.

Dyer, a young company dancer who has steadily gained greater exposure, relishes the opportunities this role gives him, not least in an extended final apotheosis in which his desire for Emble frustrated and the advances (and business card) of Quant discarded, he launches into an athletic solo of hope in his future happiness, recalling the song from Carousel, ‘There’s a place for us’. Scarlett’s famed musicality is to the fore throughout, imaginatively translating Bernstein’s sound world into movement and meaning, which, allied to his fluent and dramatically potent choreographic style and MacFarlane’s exceptional designs, make The Age of Anxiety a work of high quality and an exciting addition to this company’s already rich repertoire.