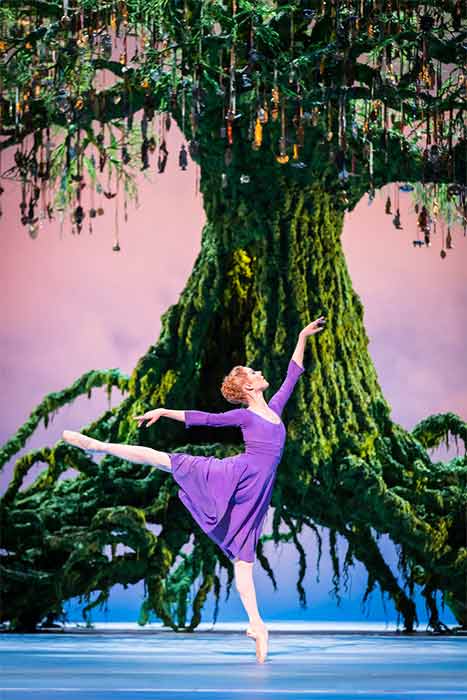 At its first revival, Christopher Wheeldon’s The Winter’s Tale presents as a very handsome production. Indeed, at many times, it is simply ravishing in terms of the stage picture: Bob Crowley’s simple, plain blocks of set and statuary create monumental interiors and the enormous tree that dominates the central act is, at its unveiling, a coup de théâtre. His costumes are beautifully made and, in the Sicily scenes, at least, highly flattering to the dancers. In order to contrast the chill tones and sober lines of the Sicilian court, however, he kits out his Bohemians in a riot of warm hues and what is best described as ‘Balkan folk’, all breeches, skirts and waistcoats for the men, lace shrugs, peasant dresses and garlands of flowers for the women. With the current widespread use of video projection in all quarters of theatre, it is rare to find it used as judiciously and effectively as in this ballet: Daniel Brodie often ravishes the eye with swelling seas, a tree through the seasons and even snow falling in a Caspar Friedrich painting. Natasha Katz’s lighting is also of the highest quality, contributng significantly to the unqualified success of the visual side to this work.

Questions arise, however, over Joby Talbot’s loud and at times overly-insistent score. There is no denying that he underlines the action with skill, but often the ears are assailed by a surfeit of tones and textures from the orchestra, so the music is at its most effective when reigned in during rare moments of private anguish, such as Leontes’s first suspicions about his wife Hermione’s fidelity and also her yearning, uncomprehending solos as a result of his subsequent cruelty to her – Lauren Cuthbertson captures perfectly the spirit of wronged innocence in her noble line and weighty gesture.

Wheeldon is also at his best at these moments, allowing himself to explore movement which conveys true emotion. Edward Watson is superb as the jealous king and is given a range of choreography which begins to delve into the character’s psyche, even if Wheeldon resorts to melodramatic gesture at times. Perhaps most successful is the choreograohy for Paulina, Hermione’s loyal companion: in Zenaida Yanowsky’s blistering interpretation, Wheeldon’s invention matches perfectly the noble, upright and morally impeccable nature of the character – her gestures are measured, clean and expressive. Only at the ‘death’ of Hermione does her cool break as she launches a ferocious attack on the king who has, through his own foundless jealousy, destroyed all happiness. 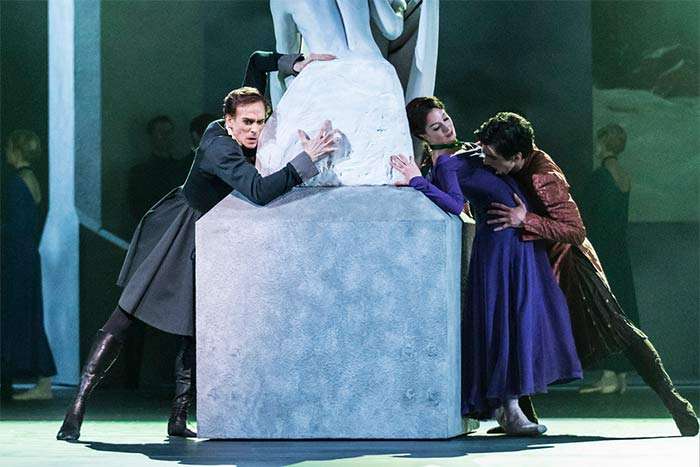 But Wheeldon often falls short, sometimes far short, of true fusion of movement and meaning. His choreography takes on all too easily a slick quality, and while the narrative-heavy first and third acts provide sufficient variety, it is the second which quickly palls. Dance can do one of three things: it can entertain, give insight into character or it can push along narrative. In the Bohemian act Perdita, lost daughter to King Leontes and Queen Hermione, and brought up as a shepherd’s daughter cavorts with the son of King Polixenes Florizel, himself disguised as a shepherd boy. At the Act’s opening we see they are in love, and thirty minutes later, they remain in love, having danced themselves silly along with the other massed peasantry of this particular hillside (the company dancers kicking up a real storm).

There is no narrative to push on and we get no character development, so what remains is essentially a half-hour divertissement, and this is where Wheeldon falls short – his folkdance infused movement is simply not of sufficient quality or interest to ravish the eye in the manner of, say, Petipa, Balanchine or Ashton. One quickly tires of flexed feet and peasant frolics, even the goofy caperings of such an engaging dancer as Valentino Zucchetti’s Brother Clown, and no matter the best efforts of Sarah Lamb and Steven McRae as the young lovers, we know nothing more about them at the end of the act than we did at the beginning.

The fundamental problem with The Winter’s Tale is, therefore, structural – in being wedded to the concept of a three-act ballet, Wheeldon’s inventiveness has been stretched too thinly. Would that the Bohemian act had been reduced from its present forty minutes to, say, twenty, made into the first scene of the post-interval second act, thus making the third act its second scene. This would have resulted into two acts of around fifty minutes with single interval; The Winter’s Tale, which contains so much good work, might thereby have become an even more effective ballet.