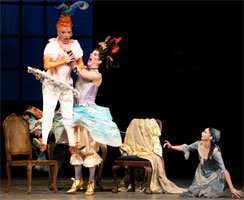 Overall, this was one of the most enjoyable and satisfying performances of Frederick Ashton’s 1948 Cinderella I have seen in many a year. The Royal Ballet, recovered from the first night of his Sylvia a few weeks back in which they danced their founder choreographer’s work in a vague, unfocussed fashion, have finally pulled things round, not only in subsequent performances of that work but now in a stylistically truer Cinderella.

For some number of seasons now, I have wondered whether it was time to retire this first full-length British ballet from the active repertoire, because it never quite seemed to work – it only fitfully cast its spell, and the great double act of the step-sisters, created by Ashton for himself and Robert Helpmann, became duller and less funny at each revival. Such heretical thoughts were dispelled by this performance, largely owing to the fact that the sisters, who feature so prominently, were here taken by a duo capable of injecting life, comedy and pathos into roles given up for dead.

Gary Avis, company stalwart and character dancer par excellence, here makes far more of the ‘bossy’ Helpmann sister than I remember seeing (I did not see Helpmann). Philip Mosley, in Ashton’s ‘meek’ sister part, has found a perfect foil and relishes the sweet, vulnerability of this put-upon ugly girl. Avis is larger-than-life, every movement, every flutter of his outsize eyelashes legible from the farthest seat in the house; in so doing, he underlines the small-scale nature of much of today’s performances at The Royal Ballet. Covent Garden is a large theatre; Ashton famously realised this when the then Sadler’s Wells Ballet was preparing to perform The Sleeping Beauty at the re-opening of the house in 1946 – he exhorted the dancers to dance and act ‘big’ in order to project. Today’s dancers know nothing other than the Opera House and perhaps forget that they too need to project both their movements and their character. They would do well to watch Avis in action. 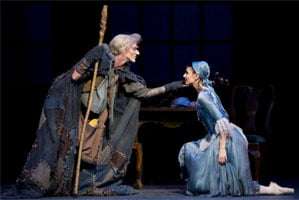 Elsewhere, there was much to praise. Marianela Nuñez, stepping in for an indisposed Alina Cojocaru, seemed far more comfortable in the role of Cinders than in that of Sylvia; her dancing is so engaging, her technique so generous, that she makes light of the technical challenges. That said, she is a very ‘modern’ Cinderella – less put-upon than unfairly bullied, and making it quite clear that if no prince comes along soon, she might just pack her bags and book a one-way ticket out of there. There is little vulnerability, but that is Nuñez’s interpretation and fits very much with her own persona.

What there could be more of is musicality; while this was less of a problem than in Sylvia, where she rode literally rough-shod over parts of Délibes’ score, her inability or unwillingness to dance within the music robs Ashton’s choreography of some of its subtleties – when music and the steps combine, the effect can be sublime, the choreography almost lit up from within. The Royal’s greatest ballerinas, among whom Fonteyn and Sibley, were the most musically sensitive of dancers, enjoying the rubato of movement within the rhythms of the score.

I wish also that Nuñez, superlative dancer that she is, paid more attention to the expressiveness of her neck and décolletage; Ashton exploited those attributes in Fonteyn, often twisting and stretching the neck and opening the arms to lend weight and meaning to upper body movement. That quality of luxuriousness is one of the choreographer’s greatest signature stylistic elements, and one which is so often missed today by dancers focussing solely on limbs – Ashton choreographed so beautifully for the neck, chest and back. 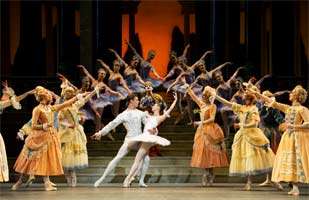 For an object lesson the whole company would do well to watch Laura Morera as The Fairy Godmother: this little-used Principal manages to light up the stage with her quicksilver movement and her generous épaulement, a keystone of Ashton dancing. She moves as a whole, her entire body in unison and harmony, footwork fast and clean, upper body luxuriant and supple – her Act I solo was a delight to watch, growing out of and illuminated by the music. Even in the final scene where she does little more than marshal her fairies into swirling patterns, a totally benign Myrtha, Morera draws the eye.

Paul Kay as the Jester also danced superlatively, his jumps high, his movement fast and mercurial, his feet sharp and quick. Kay is a performer who deserves more exposure, for he is a strong dancer with a hugely engaging and individual stage persona. Stylistically he is a British dancer through and through yet is blessed with flexibility and adaptability – he also makes his mark in Wayne McGregor’s works. If he misses the melancholy that the role’s originator Alexander Grant is said to have brought, I feel it is not his fault – I suspect that that was Grant’s peculiarity and that it is useless for subsequent dancers to strive to capture it, because they will, almost undoubtedly fail.

Elsewhere, matters were a little more mixed. While Rupert Pennefather possesses the silhouette of the Prince, is physically a good match for Nuñez and partners with unobtrusive efficiency, he makes little of the role, and even less of his ballroom solo, over which a veil should be discreetly drawn. The finest flow of choreography in the ballet comes at the end of Act I in which the four season fairies dance in succession, then together with the Fairy Godmother and are joined by the 12 ‘stars’.

The ‘stars’ were notably crisp and stylistically unified, but the season fairies were more of a mixed bag, ranging from Iohna Loots’ perky Spring and Yuhui Choe’s pliant Summer (even more luxuriance please!) to Samantha Raine’s just-below-the-mark Autumn (Morera has been the best in recent years) and Hikaru Kobayashi’s stylistically wayward Winter (was that really Ashton?).

Pavel Sorokin may be a morose presence during his curtain-call, but he ensured a stylistically true performance of Prokoviev’s spiky, brittle score from the orchestra – there was much fine playing, although the balance of the brass in the ensemble was not quite right.

From what I have written, the reader may surmise that a performance with Avis, Morera and Kay will be the one at which he or she has best chance of seeing Cinderella closest to that conceived by Ashton. Be aware that there are several casts in which lurk performers who will, perhaps, not afford you that opportunity.