In a felicitous Double Bill, outgoing Director Dame Monica Mason has programmed the Balanchine quick fire Ballo della Regina (in homage to Her Majesty the Queen’s Diamond Jubilee celebrations – Homage to the Queen anyone…?) with Bournonville’s perennial La Sylphide, the distillation of the Romantic spirit. Ballo is, if truth be told, a joyous flim-flam; set to the ballet music from Verdi’s Don Carlos, Balanchine created a sparkling vehicle for Merrill Ashley who has, thankfully, rehearsed The Royal Ballet in this revival. At its centre is Marianela Nuñez in coruscating form, relishing the manifold intricacies of the role, dashing off the most vertiginous of enchainements with dazzling speed. Nuñez is the Real McCoy – a technically highly impressive ballerina with bags of personality who demonstrates clear care for the steps she is dancing – her solos were a highlight of this performance. Her partner in the company’s first outing of this work in 2010 was renegade dancer Sergei Polunin, and the company has struggled to find a replacement for him in the many roles in which he made his mark in his brief career with them. Ballo needs a male dancer if not quite to match the ballerina, certainly to keep up with her. Nehemiah Kish danced with great verve, energised by both Nuñez and Daniel Capps’s sprightly tempos. He is not ideally suited for the role, but he danced it well and partnered with aplomb. The four demi-soloists made their mark, not least the ever-delectable Yuhui Choe and the increasingly impressive Beatriz Stix-Brunell, who recently made such an impression leading the second cast of Polyphonia. The corps de ballet was engaged if not totally engaging – alas, a fair country mile away from the sleek, thoroughbred look of New York City Ballet. 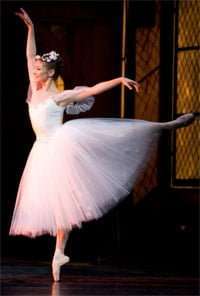 La Sylphide is, despite its trappings of tartan and tulle, a deep and moving work, a masterpiece in reality and, for those interested in such things, as near a perfect evocation of the Romantic spirit as we can see on any stage. Johan Kobborg’s production, first seen in London in 2005, is pitch-perfect – he himself is in the long and distinguished line of Danish male dancers who have made their mark as James, the ballet’s anti-hero. Sets and costumes are a deftly traditional evocation of the lithographs and paintings of the nineteenth century, Mark Jonathan’s lighting was impressive, altering mood to great effect. The company looked well-rehearsed and comfortable in the Bournonville idiom, with James Hay and Alexander Campbell standing out in particular among the wedding guests with their high jumps and clean feet in the choreographer’s intricate steps, and the corps of Sylphs were gentle and sweet in the Act Two. Capps led the orchestra through a most successful first act, indulging the music here and there, not least in the exquisitely played first violin solo in the first scene (all praise to Sergey Levitin as Co-Concert master who also revealed lush, expressive tone in Ballo della Regina) and whipping it along where speed and brio were needed. Alas, where the brass section made the most beautiful sounds in Act One, it was not to be repeated in Act Two.

Emma Maguire as James’s intended Effie made a great deal of her essentially mime role, infusing it with a sweetness and a genuine perplexity as her betrothed became increasingly distracted during the wedding celebrations. Her admirer Gurn, the man who finally gets to marry her, was impressively acted and danced by rising star Valentino Zucchetti, who brought a devoted, boyish charm to the part and was mightily impressive in his dancing – high, powerful jumps and precise petite batterie. Kristen McNally divided opinion as the witch Madge, and while she could not (yet) hope to emulate the ‘greats’ of this magnificent mime role (rumour has it that Kobborg himself will perform it during the run), she successfully portrayed the malevolence for, and the implacable revenge that she wreaks upon, the hapless James.

Alina Cojocaru is a thistledown Sylph, clearly at ease in the role, and while she should tone down her hyper-extensions (so wrong in this choreography) she delivers elsewhere on so many levels – slow turns on pointe, an airy jump and the clear sweet, innocent (even naïve) love she has for the mortal James. Her infatuation for him fizzed alongside Steven McRae, who was nothing short of remarkable. The key to the role is that he is unhinged from the outset, seized of a Romantic madness from the moment his eyes open to catch his first sight of the Sylph. McRae played it with wide-eyed obsession, his make-up emphasising the staring, unbalanced nature of the character’s mind, his illogical actions thereby rendered clear from the outset. His portrayal was delivered in a wide arc of understanding of the role, from that first moment to his final collapse at the witch’s feet. For not one second did he depart from his character – it was as coherent and rounded a portrayal as I have seen, allied to which was dancing of the highest order. McRae is born to dance Bournonville – he sails through the jumps and beats as if they were mother’s milk to him. What is all the more impressive is that he suffuses those steps with a ‘mad’ quality, the jumps explosive, the batterie almost manic to the point that it became almost frightening to watch. It is rare to see such artistic intelligence allied to such impressive technical mastery. A portrayal of the highest order.