Monotones I and II 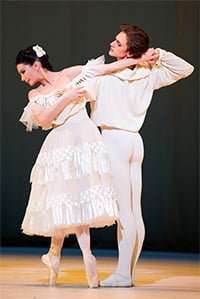 The Royal Ballet has missed something of a trick in this admittedly welcome Ashton Mixed Bill which marks the twenty-fifth anniversary of the death of its Founder Choreographer. It is something of a potpourri, designed to show the extraordinary breadth of his creative genius but ultimately just missing the mark. It is a lop-sided programme with the 21 couple La Valse – an exercise in the power of collective movement – giving way to four works which are, in essence, miniatures. Musically, a jarring note is sounded also – Ashton was nothing if not a Francophile, and three of the five works are to music by French composers and one, Marguerite and Armand, to a French narrative – the whole evening is also musically under the sympathetic Gallic baton of Emmanuel Plasson. So why, one might ask, is the Voices of Spring pas de deux to Johann Strauss II included, apart from sending the audience off to the bars in the first interval with a bounce in its collective step? The restoration in its original costumes of the choreographer’s delicious Les Rendezvous (to Auber) which has been shabbily revived in past decades, or A Wedding Bouquet, Ashton’s witty take on a French provincial wedding, or even Illuminations, his reaction to Rimbaud’s poetry and set to Britten’s music, would have made an apposite substitute. 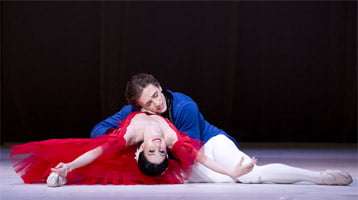 The real news of the evening was not, as many would breathlessly have had it, the return of the company’s two prodigals, who both left last season for very different reasons (Tamara Rojo to assume the Directorship of English National Ballet, Sergei Polunin to find himself), but the revival of the wondrous Monotones I and II, shamefully last seen together on the Covent Garden stage over two decades ago. In that, history repeats itself as Monotones II (as it came to be called) stole Rudolf Nureyev’s thunder in 1965 when it premiered alongside his appearance in a revival of Fokine’s Polovtsian Dances. I love this work (it became a diptych the following year with the choreographer adding Monotones I to create a work which could assume its place in the permanent repertoire) which represents a real departure for Ashton, who eschewed the narrative and elaborate costuming which had characterised his choreographic output of the previous decade in favour of a pared-down aesthetic (he designed the body-suit costumes himself). In it, he explores purity of movement, acknowledging his own Symphonic Variations on numerous occasions (another work in desperate need of revival and which would have fitted the Bill’s ‘French’ theme), and takes his own artistry into new areas. Much has been written about the evocations of Balanchine’s Apollo, of the Shades from La Bayadère, even of Merce Cunningham, but what is presented is wholly Ashtonian, an exploration of all that he found most wondrous, most moving, most telling in neo-classical dance. It is a compendium of Ashton style, with extravagant use of épaulement and contraposto, sophisticated musicality, economy of means which make the simplest of movements the most telling and which possess an effortless, luminous quality. 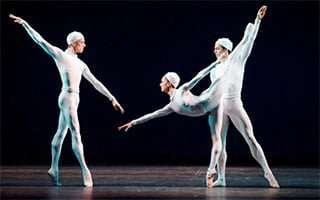 Monotones I is the more ‘earthly’ trio, comprising two women and a man clad in pale green, and is an exploration of pull and counter-pull, here carefully yet beautifully executed by a troika of young company dancers for whom this near-fifty year-old work is clearly a technical challenge. Dawid Trzensimiech and Emma Maguire, who already revel in the extravagances of Ashton’s bends and lunges, were extremely likable. The appropriately stellar trio of Marianela Nuñez, Edward Watson and Federico Bonelli delivered the celestial Monotones II with unflappable calm, exploring the roundness of the choreography with a cool luminosity, their long limbs etching lines of light in the darkness (the Opera House stage is bare and dark for both trios except for pools or shafts of light in which they dance). Watson’s flexibility and artistry give him the edge in the total use of body in Ashtonian movement, a bend to the side rippling over his back and through into his limbs. I cannot express to strongly my personal gratitude to Director Kevin O’Hare for having revived this great work, and I fervently hope that it he will continue the good work with revivals in subsequent seasons of other Ashton ballets which have lain too long in the bottom drawer of his company’s repertoire. 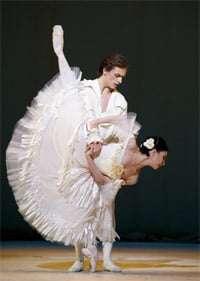 Marguerite and Armand can only work with a pair of dancers who can, in some way, simultaneously evoke and banish the stellar quality and intensity of Fonteyn and Nureyev. If anyone can achieve that, Rojo and Polunin can, so it was with added pleasure to encounter their return as Guest Artists to Covent Garden, she to undertake a final ‘farewell’ to the company (her last dance is 21 February) in which she developed into the great artist that she undoubtedly is, he to close properly and in a dignified fashion the door that he threw open by his precipitate departure last year. Their assumptions of Dumas’s tragic couple remain astonishing: she ravishing in her doomed voluptuousness, a courtesan who allows herself the ultimately vain hope of true love, yet knowing inside herself that it cannot be; he ardent, impetuous and vain, desperate to be adored. Their dancing is of the highest order, their artistry to match; the final scene as Marguerite dies slowly, inexorably in his arms is notable because of the economy of means they employ – yes, this is high tragedy, but both treat the narrative with total respect. Polunin’s crushed despair as he realises finally that Marguerite is dead before him is so subtly conveyed that its effect is all the more intense. This performance made one realise the double blow that their departures have dealt to this company: she is simply a prima ballerina and is an actress and artist of rare quality; he is a true danseur noble, filling the stage with the masculine beauty of his movement and presence. 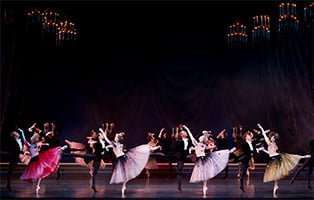 The first third of the evening is less satisfying owing to the strangeness of its composition. La Valse, Ashton’s deft evocation of Ravel’s powerful score, tinged with recklessness, has been well revived, the dancers sensitive to the demands of the choreographer’s style, bending with abandon and careful to use their arms expressively. André Levasseur’s costumes remain the epitome of chic, a glorious stage picture created by the coloured skirts and black tailcoats whirling and twisting as the dancers spin and jump. 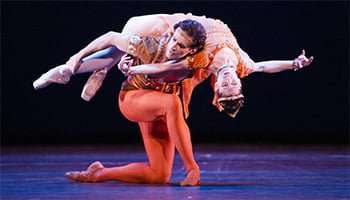 The Thaïs pas de deux (it was called thus for many a year) has, for some unexplained reason, reverted to its original 1971 mouthful of ‘Méditation’ from Thaïs, and here received an uneven performance. It is a glorious miniature (originally created for Antoinette Sibley and Anthony Dowell) that carries the heady scent of Ashton’s beloved Anna Pavlova in her mode orientaliste. Leanne Benjamin remains wondrous, her bourrées on pointe impressively silent, her back and arms those of the most sensual of odalisques. Alas, her partner was not on the best form, and the seamlessness that this pas de deux requires to achieve its full effect was missing. 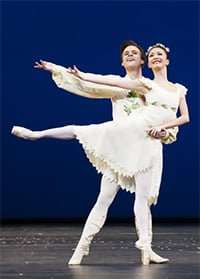 Voices of Spring (in the bizarre Ruritanian costumes from some bus-and-truck production of Coppélia that inexplicably replaced the original Grecian outfits some years ago) was freshly danced by a delectable Yuhui Choe and the ebullient Alexander Campbell. They found the right level in what has seemed overdone in seasons past by more senior dancers. The pair brought speed and vitality to the sparky choreography, precision to the fast footwork and just the right amount of throw-the-head-back abandon in what feels like Ashton’s take on those marvellous Soviet bravura duets, while still making it undeniably Ashtonian (it includes, for example, his trademark ‘walking-on-air’ travelling lifts which in this Bill are also to be seen in Monotones and Thaïs).

Musically, the evening benefits greatly from Emmanuel Plasson’s solicitous conducting, which elicits beautiful orchestral playing, nowhere more so than in La Valse which throbbed and pulsed as it should; Vasko Vasiliev offered solo violin playing of rare quality in Thaïs and Robert Clark was notable as the pianist for Marguerite and Armand (set to an orchestration of Liszt’s Piano Sonata in B minor). Much care has been taken with these revivals, which is nothing less than Ashton deserves. Much is also made in the programme book of the involvement of the Ashton Foundation which, a quarter of a century after the choreographer’s death, seems finally to be grinding into motion to ensure the survival, preservation and dissemination of the works of the greatest dance creator this country has yet produced. It can only be supported and encouraged in its vital work.