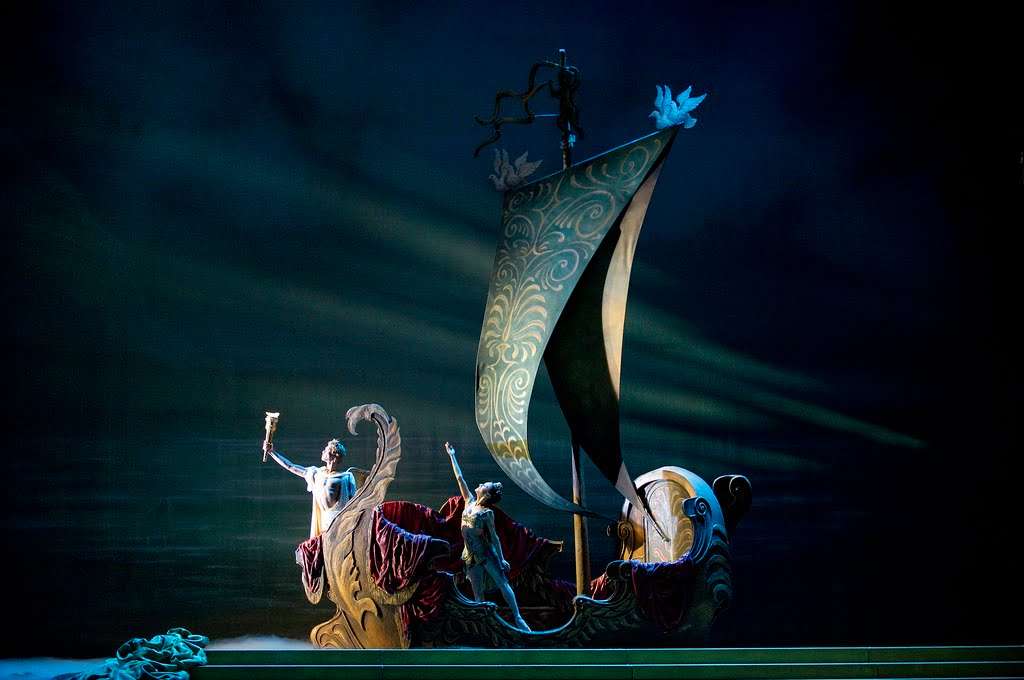 Three cheers, more even, for Sylvia, now happily returned to the stage of the Royal Opera House. The Royal Ballet’s season has not, until now, been in any way glittering. The year started with Alice, the overlong children’s entertainment, and then on through the disturbing The Judas Tree, hardly a crowd-pleaser, to the recent dreadful triple bill bringing together Hofesh Shechter’s insistence and Arthur Pita’s flamboyance, both unwelcome. And now, at last, Sylvia by Sir Frederick Ashton, a genuine first-class choreographer – this faintly ridiculous mythological romp may not be from his top drawer of works, but it is so full of real ballet dancing that any minor quibbles must be dismissed.

And congratulations to the company for performing this work by its founder choreographer with such panache – the dancers look alive and keen, bringing a youthful verve to their dancing. Ashton’s 1952 creation is his tribute to, and evocation of, grand Third Empire French ballet, set to Delibes’s ravishing score, here played forthrightly by the house orchestra under Simon Hewett’s initially sluggish baton. The work was considered lost until the-then director Monica Mason commissioned Christopher Newton to bring it back to life back in 2004 for the Ashton centenary celebrations. Her sense that it could and would work was proved right, and the production has been acquired by such other companies as American Ballet Theatre and Saint Petersburg’s Mariinsky Ballet. And now it returns to the stage on which it was created 65 years ago. 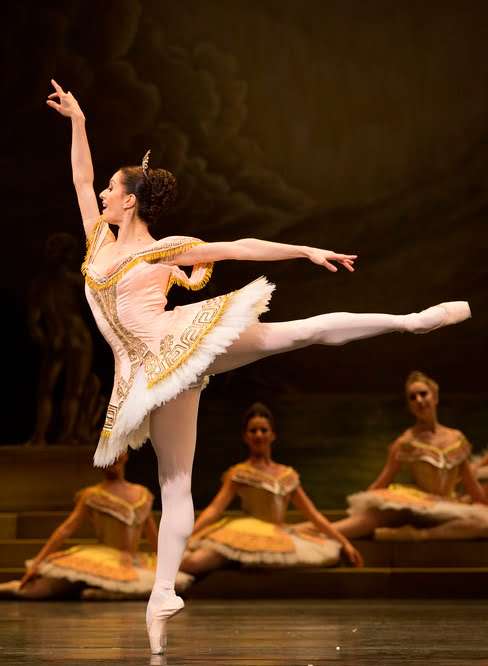 It is a feast for the eyes, with the magnificent Ironside brothers designs for Acts One and Three lovingly recreated and complemented by Peter Farmer’s ‘new’ Act Two, those particular original designs having been lost. We are in the world of rococo mythology with extravagant headdresses and shepherdesses clutching little baa-lambs, glorious costumes in vibrant colours and lavish painted sets and backdrops. Farmer effects one of the most satisfying set changes to be seen as Eros magics away Orion’s Act Two jungle lair to make way for his stately galleon, red sail decorously billowing, in order to transport Sylvia back to her pining Aminta.

And to the dancing. The company is blessed at present with a young, vibrant corps de ballet who set about Ashton’s filigree footwork and stylish upper body movement with considerable aplomb, and also soloists of considerable presence and intelligence, not least James Hay and Elizabeth Harrod who were the cheekiest, haughtiest Act Three goats imaginable and Itziar Mendizabal whirlwind of a Diana, a truly frightening deity, only mollified by the vision of herself pining over a sleeping Endymion conjured up by the finely chiselled Eros of Valentine Zucchetti. Ashton’s understanding of the conventions and structure of classical dance is everywhere apparent, as is his playfulness with those same conventions, his incomparable wit ever present.

As the two men in Sylvia’s life – not bad for a chaste huntress dedicated to Diana and plenty of hunting – Thiago Soares as Orion and Vadim Muntagirov were superb. Soares is an experienced dancer and he makes much of the stock villainy of the hunter who abducts Sylvia and makes her dance for him in his hide-out. Muntagirov was clearly having a ball in what can be the thankless role of Aminta, the shepherd who spies on Sylvia and her attendants, is shot by her for the transgression only to be brought back to life by Eros. Such is this dancer’s physical and technical level that even the simplest of movements bring great joy to witness. When he launches himself into the Act Three pas de deux solo, we marvel at the perfection of his execution, leaps high and airy, spins perfectly controlled, everything seemingly effortlessly brought together in grand sweeps of motion. His smile in the coda was a broad as could fit on his face – this is an artist who simply loves dancing, and his pleasure is infectious. 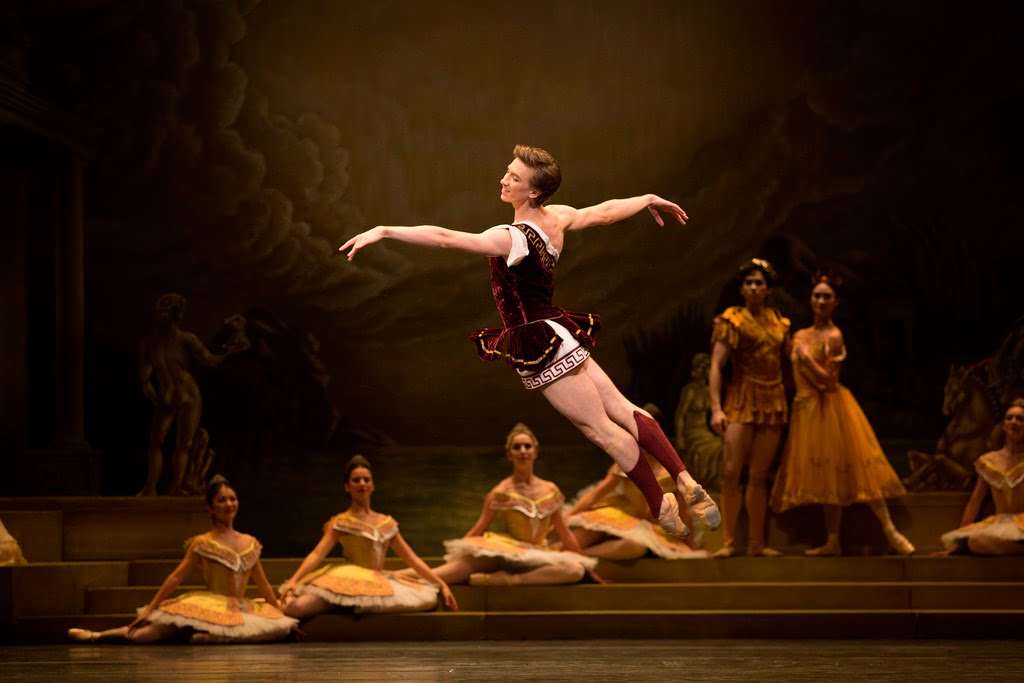 The central role of Sylvia, long and demanding, was created by Ashton as “a garland for Fonteyn” in the words of the late Clive Barnes, and exploits the many facets of that legendary ballerina. Marianela Nuñez has danced it before, at the last revival, but this time round she seems perfect for the part, in full command of the technical challenges (which in themselves put paid to the assertions by some that Fonteyn was a technically weak dancer) and bringing a somewhat more modern take. Indeed, this is a farouche Sylvia, no wilting flower, but a huntress, an intelligent woman who schemes to get Orion drunk to make her escape (the fact that she can’t get out and that only a quick prayer to Eros does the trick is neither here nor there) and much more than a conventional ballet nymph – her perplexity at the unknown feeling of growing love for Aminta (she has been shot with a love dart by Eros for daring to mock him) is tellingly conveyed. She dances gloriously, with an expansiveness and a playful quality which fit Ashton’s loving pastiche perfectly – her pizzicato solo is full of intelligent rubato. Her dancing with Muntagirov is especially satisfying – they make for a striking stage partnership of two dancers at the top of their considerable abilities and enjoying the whole experience.

Sylvia is most welcome, not only as a gloriously silly entertainment and a feast for both eyes and ears, but also as a showcase for the abilities of some of the most impressive dancers of today; that it sees The Royal Ballet employed in something worthy of its illustrious name is an added source of pleasure.