Perceptive programming for the opening of the Royal Opera House’s opera and ballet Olympic Season – think rings! – finds both resident companies presenting triptychs by leading exponents of their art form: Puccini’s Il trittico and Balanchine’s Jewels. While the former deals with different aspects of love and passion, the latter examines what George Balanchine took to be the three great schools of classical dance: the French, the Russian and, in typically modest manner, the American, which he credited himself with creating. 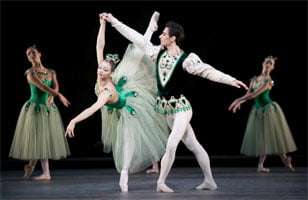 Emeralds is the most ‘difficult’ of the three works – intended to evoke the early nineteenth-century French Romantic style, it uses elements from Fauré’s Pelléas et Mélisande (misspelt in the ROH programme) and Shylock, and is, in terms of stage rather than concert-hall performance, a bit of a bore and it did not help that it was soporifically delivered by the orchestra under Valeriy Ovsyanikov. The evocation of the Romantic style (having seen just a few days previously in Copenhagen the genuine article in Bournonville’s La Sylphide, which dates from 1836) is rather loose, and while much of the choreography focusses on dreamily floating arms and pliant upper bodies, it all feels generically droopy, a lot of flopping around in a faux-Romantic manner. Tamara Rojo led the troops into action, and was her customary impressive self; she is an artist of such integrity although one wonders why this astonishing technician and virtuoso continues to be cast against type in this work. The ever-admirable Leanne Benjamin was mightily inspiring too, using her intense musicality to explore rubato in movement, a delicious response to the music. Alexander Campbell had joined the company from Birmingham, and, perhaps because this was his first show, was cast in the first two ballets. He is a strong, neat dancer, precise of movement and an alert presence – he is a welcome addition to the ranks and here centered the pas de trois with the well-matched Samantha Raine and Deirdre Chapman. The corps de ballet was suitably in-style, but the work is too long. 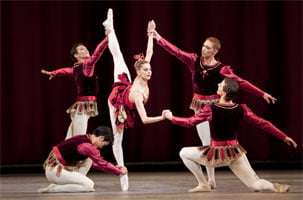 Rubies is a much more accessible affair – Stravinsky’s quirky Capriccio and all flashing smiles and Rockette high-kicks. Balanchine in ‘Amurican’ mode is somewhat difficult to stomach – he himself developed a penchant for bootlace ties and cowboy boots (Western Symphony, all cowboys and cowgirls, one dreads). The inspiration is sassy, vulgar Broadway pizzazz, and, the lead trio certainly delivered on all counts. Zenaida Yanowsky tore through her solo role with clear relish, thrust hips, deep lunges, high kicks, a flashing smile and a slutty Broadway sexiness. Sarah Lamb is more demure as a dancer, but she ripped her way through her choreography even if it was without that last ounce of Balanchinean attack that we saw when NYCB-import Alexandra Ansanelli assumed the role at the last revival, showing all the Brits how it’s supposed to be done. Steven McRae, his ginger hair clashing quite eye-wateringly with the cherry-red of his costume, made for an insouciant lead man, high jumps, razor-sharp movement, but there was a little too much of the chorus-boy in his interpretation. The brazenness of the choreography sits uneasily on the ladies of the corps de ballet, who, nevertheless did their very best to be loose-moralled Rockettes. Robert Clark at the piano led a competent if unexciting performance of the Stravinsky. 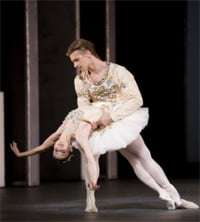 Diamonds is Balanchine’s tribute to the Russian school of his upbringing, and he certainly throws the whole of classical Russian ballet history at us in one – both Petipa and Ivanov are evoked, Swan Lake, Sleeping Beauty, Raymonda all referenced. The message is clear: Balanchine was their successor – he takes their idiom and re-crafts it in this work. Set to all but the first movement of Tchaikovsky’s ‘Polish’ Symphony, it possesses grandeur but is an uneven work: the first section is for corps de ballet and demi-soloists, and is a mish-mash, without a true choreographic core. The second is an extended, 10-minute pas de deux for the central couple; the scherzo, the most satisfying, features appearances by all ranks in musically sensitive movement, and, finally, a wham-bam finale. Alina Cojocaru danced in a state of grace, unafraid of the fiendish choreography originally created for Balanchine’s muse Suzanne Farrell. She stretches her tiny frame to fit the expansiveness of movement quality and exults in the technical challenges. She was excellently partnered by Rupert Pennefather who has found a new authority and confidence which invests his dancing and his demeanour with gravitas and importance. He acquits himself well of the technical demands without being a virtuoso, but it was his careful presentation of his ballerina which marked him out as a partner of talent and distinction. Impressive were the four demi-soloists, who demonstrated cleanness of attack and stylistic unity, even if Yuhui Choe could not quite mask the delicious voluptuousness and pliancy of her upper body and arms.