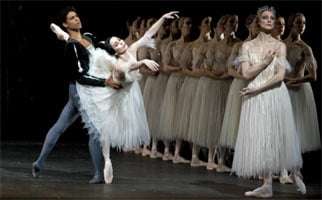 Giselle returns to Covent Garden in Sir Peter Wright’s handsome production, now into its second quarter century, with John Macfarlane’s evocative sets. Wright goes for a clear telling of the narrative, a very English affair with a multitude of naturalistic touches, far away from the stylised nature of productions presented by visiting Russian companies, which focus more on preserving the Romantic style of which this tale remains undeniably the exemplar.

Certainly for a British audience, Wright is right – we react well to and understand these small touches which flesh out otherwise distant characters; however, in making them all more ‘believable’ we do lose that timeless, romantic quality, or rather, it falls more heavily upon the interpreters to create it, for without the Romantic aesthetic, Giselle cannot work. If we do not believe in her fragile innocence, her madness and death from a broken heart, we cannot begin to believe in the world of the Wilis – vengeful spirits of young women jilted before marriage, stalking the forest to exact revenge on hapless men who fall into their clutches. It is the audience’s suspension of disbelief and its entering Giselle’s world which are essential, and, on balance, they are made that little more difficult by our more literal theatrical tradition in which Wright’s production is undoubtedly made. 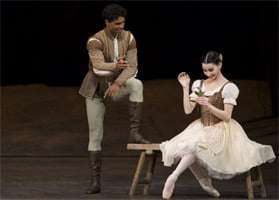 Opening night cast presented the luxury, five-star casting of Tamara Rojo and Carlos Acosta as Giselle and her swain Loys, soon revealed as the caddish Count Albrecht. Rojo has most of the makings of a fine Giselle, and indeed, her steely balance was used to great effect as the spirit of Giselle who defends her ‘lover’ against her spiteful sisters – Rojo can balance on one pointe seemingly forever, defying the laws of gravity as any proper wraith should do. She has a beautiful face, perfectly suited to the Romantic hairstyle, and her body is soft and pliant. 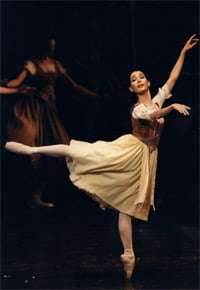 But something eluded this great dancer – she was at all times Tamara Rojo dancing Giselle and, for me at least, never Giselle herself, with the result that eyes remained resolutely dry at her death . Her technical mastery of the choreography is almost complete, but as the first act, living peasant girl, despite youthful playfulness and tosses of the head, despite clear infatuation with the handsome stranger who is courting her, despite her warm relationship with her mother Berthe (superlatively acted and mimed by Genesia Rosato), she never convinced – she was always la Rojo, mindful of the need to ‘nail’ each high point, execute perfect turns and hold that balance just that little bit longer. In Act II, she was careful with the romantic poses and arm positions required, but lacked the ethereal lightness Giselle’s ghost needs really to convince. Rojo has never had a big jump, which in this role is a distinct shortcoming – she must sail through the air, hover almost. This Giselle was earthbound.

Acosta was also always Acosta, and I wish he would decide if he is playing Albrecht as a nobleman or a bit of rough – one simply cannot switch between courtly, affected mannerisms (it can work, believe me) and naturalistic, un-balletic movements. In terms of dancing, he was on very good form, executing his solos with panache, jumps high and clear, feet pointed like arrows and tight in entrechats and jumped turns.

Elsewhere matters were generally of a good standard – Laura McCulloch was an efficient, if not particularly terrifying Myrtha, Queen of the Wilis and needs to re-think her use of arms, which at present are stiff and inexpressive, although she impressed with her opening bourrées across the stage (rapid tiny steps on pointe which give the impression of gliding) and tackled her exhausting solo with aplomb. The Wilis were well drilled, with an admirable sense of style and cohesion.

In Act I, it was good to see David Drew back as a Guest Artist as the Duke of Courland, the bluff, Henry VIII figure whose hunt enters the village and leads ultimately to Albrecht’s unmasking, and Christina Arestis makes for a splendidly frigid Bathilde, Albrecht’s noble betrothed. The Peasant pas de six has suffered from some tinkering – Peter Wright is one of the greatest producers of ‘classic’ ballets, but he will fiddle with his productions in revival and here it is not to the good: he has excised the delightful girl’s solo by Frederick Ashton, doubly cruel here as Yuhui Choe, that most promising of upcoming ballerinas took the part. In its place we have a trite little duet for the two side girls and the lead now has their choreography alone from the coda. Inexplicable. Ricardo Cervera led the men, eye-catching as ever, and was flanked by the bizarre pairing of Fernando Montaño and Valentino Zucchetti, the latter recently entered into the company and a stylish and characterful young dancer who is already making a mark (he danced the Blue Boy in Les Patineurs recently), the other a Cuban import whose demeanour, line and execution of choreography find no fan in me.

In the pit Koen Kessels, the new Music Director of Birmingham Royal Ballet, conducted with his customary intelligence and subtlety, although I am not a great fan of the Joseph Horovitz revision of Adolphe Adam’s superb score, now used by The Royal Ballet – I find it unfocussed in places. Horovitz is the composer of numerous ballet scores, but I am unconvinced that his approach necessarily brings out the best in Adam. Time for a rethink.

Six casts appear in this revival, so, as ever, careful planning will be required to get the ‘best deal’ – stars Rojo and Acosta may be, but my money would be on the pairing of Leanne Benjamin and Edward Watson.