Dances at a Gathering 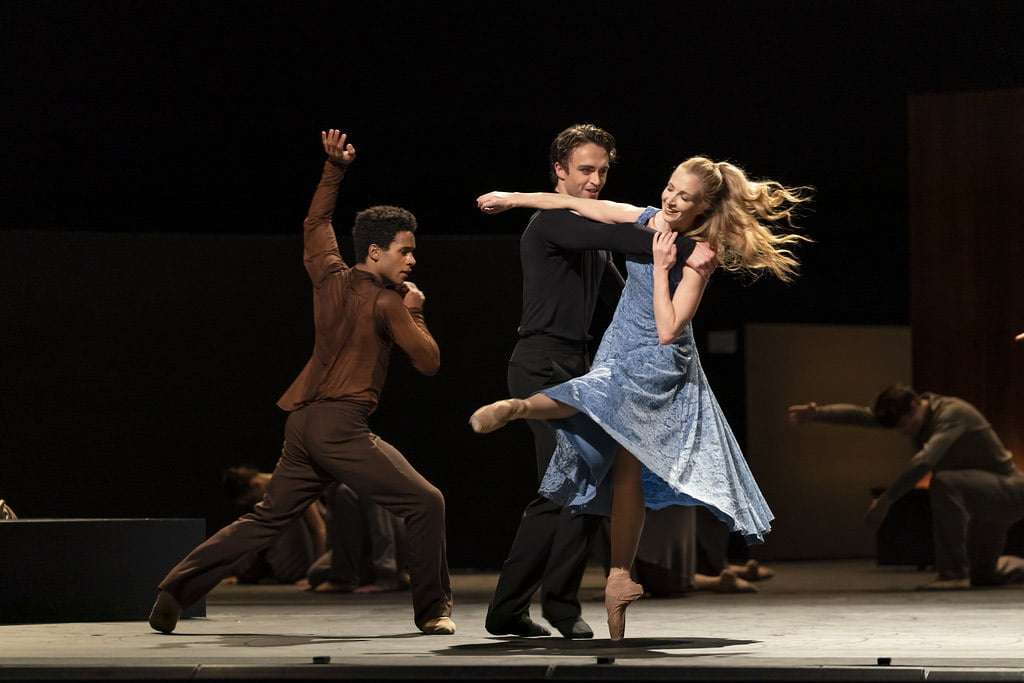 Ballet double bills are difficult evenings to get right; directors do not have the luxury of “well, at least I liked the other two” they get with a triple. Both pieces have to be right, and the pairing must work. In yet another example of poor programming, The Royal Ballet juxtaposes an acknowledged masterpiece from one of the twentieth century’s greats alongside a new work from a choreographer who, although well-enough respected, is simply not in the same league, and who is making a main stage work at Covent Garden for the first time. It was not meant to be so. Originally, Cathy Marston’s The Cellist was to appear alongside a new piece by Liam Scarlett, the company’s Artist in Residence, suspended after allegations of serious sexual misconduct. Perhaps that is just as well, as that ballet was supposed to have been based on Oklahoma! The mind boggles. So that is how Jerome Robbins’s lustrous Dances at a Gathering, a symphony in pure movement and atmosphere, comes to feature as the ‘opener’ to Cathy Marston’s The Cellist, as busy, as fussy and as unsuccessful as the Robbins is not.

First the good news. This revival of Dances is strong indeed, with some of the company’s finest dancers (a mixture of those experienced in and those new to their roles) achieving the true sense of community which is essential to this sixty-five minute ballet set to a delightful potpourri of Chopin. Robbins always insisted that there is no story to Dances, but there are just sufficient hints of meaning to make this series of dances for five couples in varying combinations utterly transfixing. Back in 1969, when he first made it for New York City Ballet, Robbins achieved in creating a study of purified lyrical neo-classical movement which showcased the first cast and has subsequently provided a glorious, multi-layered vehicle for successive generations of dancers over half a century. 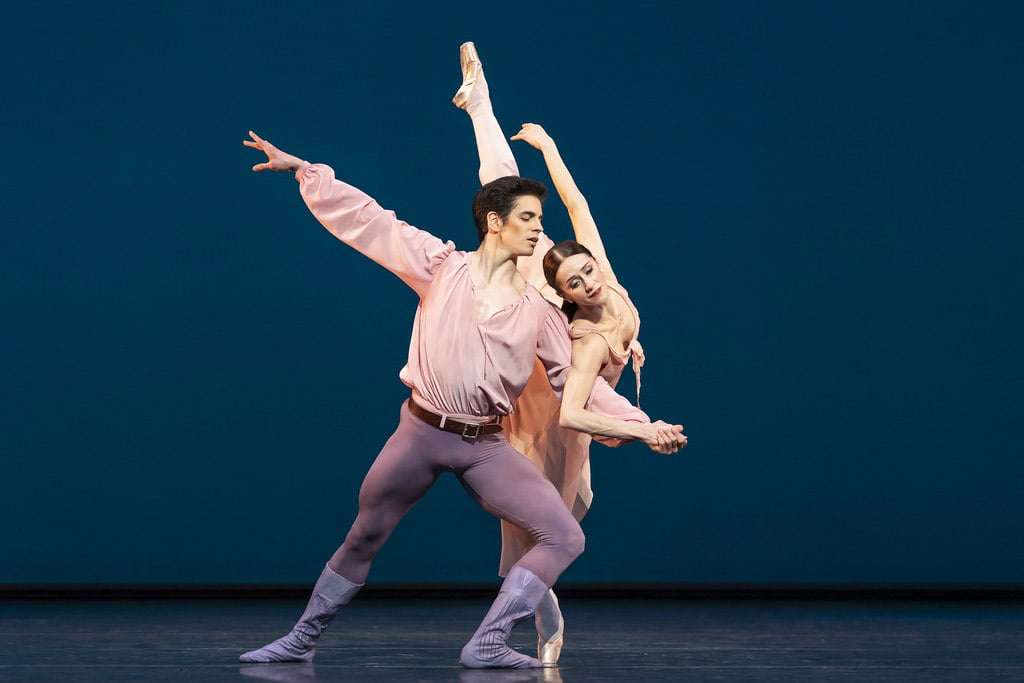 The Royal Ballet has a long tradition of performing this work, and it continues to suit its dancers well, allowing danseurs nobles, ballerinas, demi-caractère men and soubrettes to find their place within it. And that is the key to its success – the ten artists form a little community, come together in an unspecified location to dance, to remember, to be together. There are hints of Mittel-european movement (clicked heels, Hungarian folded arms), so this could be a ballet about past times and a lost land, but nothing is obvious, let alone laboured. The Royal Ballet fielded a remarkably homogenous cast with Marianela Nuñez and Federico Bonelli delivering a melting intimate and touching adagio pas de deux, and Alexander Campbell as a fizzing soloist in brown, brimming with spiky musicality and a cheeky village-boy persona; William Bracewell confirmed his rising status in the company with a striking physicality married to melting upper body and arms which lent great expressivity to his movement, while Yasmine Naghdi impressed with her buoyancy and sunny characterisation. Delivering a masterclass in dancing and projection of character, Laura Morera appeared in excelsis. She is the company’s finest dance-actress, so even in abstract works she infuses every gesture, every look, every pose with sense, fine judgment and proportion. Her two solos showcased her extraordinary musicality and her ability to dance within the music – her sense of rubato, of tiny slowings-down and speedings-up, is magical, and gives her dancing incredible texture.

Cathy Marston’s decision to make a sixty-five minute ballet on the life of cellist Jacqueline du Pré was a bold one. It proved to be the wrong one. Despite the input of a dramaturg, The Cellist is a narrative mess, sprawling over some twenty plus scenes, a deeply unsatisfying mixture of biographical detail and more impressionistic work. Indeed, it emerges as neither one thing nor another on nearly all levels: there are instances when the dancers of the company are asked to mime being a piece of furniture – a wardrobe, a table, a standard lamp – and others when actual furniture is brought in. Thus on the wedding night of du Pré and Daniel Barenboim, a rotating bar stool is brought in to aid the choreography; there is much use of actual cello cases (rather too unwieldy for graceful ballet movements, if truth be told) while principal dancer Marcelino Sambé interprets the role of du Pré’s cello and also represents, one assumes, the essence of her musical genius.

The linear narrative, starting with the young du Pré’s family life and moving through her first encounter with the instrument, her training, performing career, marriage to Barenboim and then the onset of her debilitating illness, makes The Cellist too predictable, as Marston only allows herself some brief flights of choreographic fantasy before returning hastily to ‘the story’. She deploys many characters, from du Pré’s own family to cello teachers and even three unnamed ‘musical friends’, too many to make a mark, too many to be anything other than mere ciphers. Fatally to the work as a whole, Marston has failed to imbue even the protagonists with any real depth of character or emotional progression – Daniel Barenboim (a svelte, black-clad Matthew Ball – wasted) is a conductor and then a husband, but we see nothing more of him other than a moment of head-in-hands despair as his wife slips into physical infirmity. Lauren Cuthbertson goes from sunny Jacqueline to sad Jacqueline and then on to desperate Jacqueline, and that’s about it, while Sambé as her cello shows mild curiosity and some dog-like devotion as his ‘mistress’ slips away from him, but what else can a wooden musical instrument do?

Matters are not helped by a dreadful score from Philip Feeney who has sewn together, Frankenstein-like, bits of famous cello pieces (Elgar, Mendelssohn, Beethoven et al.) and added some of his own frankly dreary music. There are few musical climaxes and little to raise the musical temperature despite the evident ability of Hetty Snell, the cello soloist in the pit, as one dull scene follows on from another. 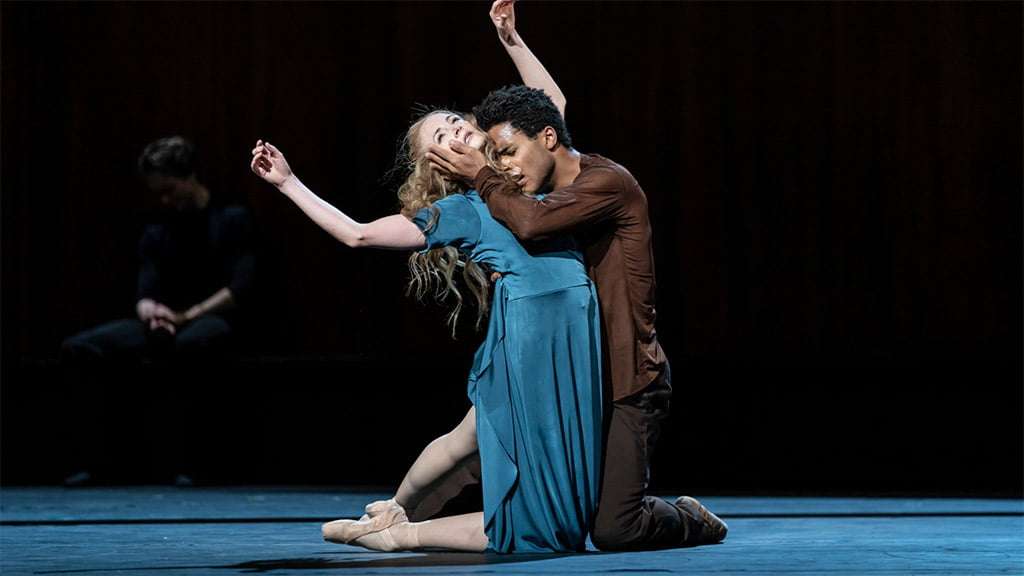 Marston’s choreography is a bitter disappointment, and it is clear from the outset that her chamber-scale choreographic qualities do not translate onto the main stage of Covent Garden. Movement is repetitive and limited, with a great deal of turning and circling, and a penchant for awkward and often ugly lifts in pas de deux. It veers between the dull and the trite, sometimes combining both attributes as in the use of the corps de ballet as an undulating orchestra as Cuthbertson’s du Pré plays Sambé the cello in the Elgar Concerto, conducted by Ball as Barenboim. A basic limitation is the movement quality of each of the three principals – de Pré will always start and finish with the sawing movement of the cellist at play and spread her legs to play, while Sambé (a dark-skinned man who wears a see-through top with five black lines down his front – get it?) as her cello forever kneels between her legs with one arm, fist clenched, raised aloft; even in solo work, he constantly raises his arm to emphasise the shape of the instrument; Barenboim too must conduct (although he mimes playing the piano at one juncture). And that’s pretty much it. Dancers come and go constantly, they mill about, observe the action and manipulate the two curved walls of Hildegard Bechtler’s minimalist ‘set’ which rotate with depressing regularity, never more so as when du Pré and Barenboim rush from concert to concert in a whirlwind of performances. It all may have looked good on paper when Marston and her co-scenarist Edward Kemp worked it all out, but it simply does not work as a structure for a ballet at Covent Garden, let alone one which lasts some sixty-five minutes…

The dancers cannot either be faulted or blamed and, indeed, they deserve every plaudit for engaging in this deeply tedious enterprise as enthusiastically as they do… but then, they are artists at the very top of their profession, a fact perhaps forgotten by Marston when asking them to do the most meaningless of things. The Cellist is, sorry to say, yet another of the new work duds which have in recent times seen the light of day at The Royal Ballet, from Wayne McGregor’s dreadful Raven Girl and Christopher Wheeldon’s half-baked Strapless through the dull predictability of Hofesh Shechter’s Untouchable, Arthur Pita’s ridiculous The Wind and Sidi Larbi Cherkaoui’s laughable Medusa – all gone, we fervently pray, but not forgotten, to serve as a warning to future generations and maybe to passing shipping. The Cellist’s greatest sin as a ballet is that it is irredeemably dull; art can and, arguably, should provoke, challenge and even shock, but what it must never be is boring.