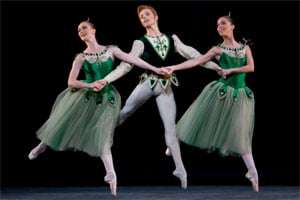 Are they real or are they paste? That question forever forms in my head as I watch George Balanchine’s full-evening trilogy Jewels. What the work is most certainly is a display of Balanchine, a great self-advertisement showing he can choreograph in three distinct styles: French for Emeralds, American for Rubies and Russian for Diamonds. In doing so, Balanchine set himself as the master of all, in command of ballet ‘history’, all proverbial roads leading to…him. It is a neat conceit, and was intended to act as the setting for Balanchine’s star dancers when it was premiered in New York in 1967. The work remained with New York City Ballet for many years, but in recent times, ballet company directors, desperate to find a full-length evening which will fill houses, have begged to George Balanchine TrustSM to perform this bauble of a Balanchine® Ballet. St Petersburg and Paris are now joined by London. It certainly makes for an interesting evening, as one not only sees Mr B’s undoubted versatility but also whether the company in question can cope with its demands, both stylistic and technical. 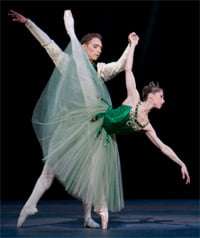 On opening night, The Royal Ballet laid out some of its most brilliant gems, but alas not all was top quality, and some low-grade examples were also on show. Emeralds is the most elusive of the three, evoking the French lyrical style (as far away as possible from today’s hard cut and hard-nosed classicism prevalent at the Paris Opéra Ballet). It is performed in long tulle skirts, and evokes the heady scents of art nouveau and the Belle Époque. The Royal capture that fragrance well enough and both lead ballerinas, Tamara Rojo and Leanne Benjamin, delivered their filigree footwork and luscious épaulement most stylishly – it is strange how, despite having a classical technique of awesome strength, Rojo is rapidly finding her greatest roles in a more romantic vein (Les Sylphides – Prélude, la Sylphide, Giselle). Men in Balanchine ballets take a distinctly second place, no more so than in Emeralds, although Steven McRae shone in the trio and the work ends poetically with the three lead men arms raised – the women have evaporated as if memories of dreams, although the obvious build-up to a finale and a slightly tiring focus on stage symmetry in the last few minutes of the work rob it of that ultimate poetic feel. The playing of the Royal Opera House orchestra under Valerij Ovsyanikov was sluggish. 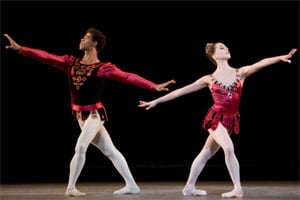 Rubies is a jazzy, punchy, hip-thrusting romp, playing cheekily with Stravinsky’s Capriccio for Piano and Orchestra. In what was the most impressive performance of the evening, Alexandra Ansanelli took no prisoners: her attack and risk-taking were thrilling, as were her speed and brilliance. Balanchine is as mother’s milk to her – she is a product of the School of American ballet and NYCB, so her comfort with the style comes as no surprise, but the reticence that she has shown since her arrival in London is now gone, perhaps now that she has announced her resignation from the company and retirement from ballet. What has seemed so wrong in the Royal’s classical repertoire and indigenous works is right here – sassiness and a certain vulgarity are what is called for, and while her Aurora simpered like a prom queen and her Ondine was more Esther Williams than water-nymph, the lead in Rubies fits her like a glove. Her multiple pirouettes were vulgar, sure, but we’re talking Manhattan brashness. She was almost matched by an energised Carlos Acosta, who although looking a little thick set nowadays and indeed a little short of leg in Karinska’s unflattering costume, launched himself gleefully into this fractured classicism. Ansanelli took risks and trusted his partnering – Acosta thrives on this and together they delivered a knock-out performance. Alas, the corps de ballet and the other lead were more stolid; hip-thrusting and Rockette tits-and-teeth are not their style, and it was a rather reserved matter apart from the main couple. All praise to Robert Clark as pianist for this piece which seemed to blow the French cobwebs off the orchestra, which responded with more engagement than it had in the Fauré. 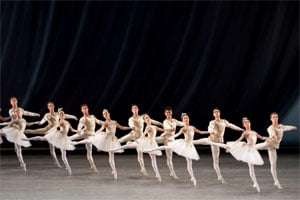 Diamonds is Balanchine placing himself firmly as the heir to Petipa – the music is Tchaikovsky and the style is a balanchinian take on the great choreographer’s benchmark classical style. I find it a bore, not least in its strange structure – the first movement is for corps de ballet alone, the second a pas de deux for the main couple, the third for the leads and soloists and finally the fourth sees the entire corps de ballet join the throng. Balanchine corrupts the Petersburg classical convention and is unafraid to introduce unusual movement (arms crossing in from of the face, steps executed to the back of the stage), but he can also make movement of jarring ugliness. In the adagio pas deux, which essentially takes a long time to get going and in the event doesn’t actually go anywhere this was particularly apparent. The third movement is the best, with soloists and principals entering and leaving the stage to execute delightful enchaînements to the Scherzo. Alina Cojocaru, thankfully restored to health after a long period with a neck injury was blandly accomplished, her small frame and movement quality lacking the ‘grand manner’ needed to make the choreography sing. There was nothing wrong with her performance as such, and technically she is in full command, but the nuances, musicality and generosity of movement were all absent. Rupert Pennefather has been accused of minting the word bland, but he is growing into that oh-so-rare creature, a danseur noble. His carriage is noble and his partnering gentlemanly and considerate; his dancing is clean and efficient without being virtuosic – but that is no criticism when he displays such bearing and command of the stage. Soloists (including the delectable Yuhui Choe) and corps were good, without displaying the unity of style needed or the attack which is essential to Balanchine works. It was polite, correct and very English. The orchestra enjoyed itself in the Tchaikovsky, although Ovsyanikov could up the tempi a little just to squeeze a little more pace into the proceedings.

Jean-Marc Puissant’s settings are rather silly, with what looks like the foyer of a cinema for Rubies and with nonsense chandeliers for Diamonds. Karinska’s costumes for Emeralds and Diamonds are among the best that that prolific designer produced during her career. So paste or real jewels? Certainly there are some gems here, but the setting is a little tawdry and I am not convinced that all the stones are the real thing.