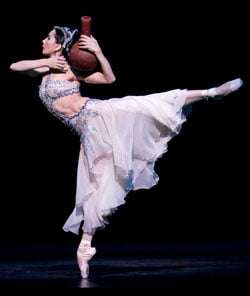 Natalia Makarova’s production of the old warhorse La Bayadère has been wheeled out yet again at Covent Garden to fill that fallow period after the glut of Nutcrackers. It is a strange piece, but one which has found favour in in Makarova’s staging at several ballet companies worldwide. The regret is that Nureyev’s staging for The Royal Ballet of The Kingdom of the Shades, (Solor’s opium-induced hallucination and, more importantly, Petipa’s blueprint for classical dancing), was jettisoned in favour of this production of the full ballet. That is wholly to be regretted – Nureyev used the full 32 shades instead of Makarova’s cut-price 24 and his touches came out of a deep understanding and love of the classical idiom. Still, times have a’ changed.

The 15th January saw The Royal bring out the big guns and, perhaps for the first time since Guillem and Bussell danced together as the temple dancer Nikiya and the princess Gamzatti, there were two true ballerinas in competition for the feckless Solor (here Cuban superstar Carlos Acosta): the luminous Tamara Rojo and the firecracker Marianela Nuñez, both at the summit of their considerable powers. Nuñez’s awesome technique (triple and even quintuple pirouettes thrown off with insouciance) made Gamzatti an Amazonian character, although she lacks the malice that can be brought to the role by a less sunny temperament. Her love for Solor was genuinely portrayed, and both her garden and Temple solos were executed with aplomb, including spacious and rock-solid Italian fouettés in the former, and sensuous arms and back as well as the inevitable multiple pirouettes in the latter. 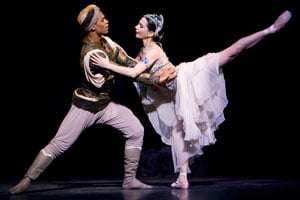 Rojo, however, won the battle, if battle there was, with a performance of serene mastery. She is a ballerina at the top of her form and, more importantly, artistry. Her Nikiya is an innocent caught up in the web of political and religious intrigue of the Rajah’s court; her love for Solor pure, her devotion to her faith unconditional and her devastation at her beloved’s faithlessness total. In The Kingdom of the Shades, Rojo attained that melancholy purity which is the essence of the role and was in total command of the cruelly exposed choreography, technique subsumed to art. The extravagant sensuality of her back and arms is a rare sight, as was the total integration of movement from the tips of her fingers to those perfectly arched feet. It was, in short, a triumph of dancing and set Rojo down as one of the great interpreters of this role.

Acosta is a little thicker in thigh and a little more earth bound than in the past, but he knows how to deliver in this role, and asserts himself in what is a very silly part. He acts simply and with genuine feeling, investing stock gesture with meaning and, moreover, is a superlative partner, supporting both Nuñez and Rojo with a sure hand (Rojo’s supported pirouette which he then let go for her to turn twice unsupported only to stop her revolutions with one hand as he knelt was a marvel). 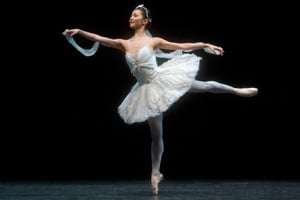 The setting for these three jewels of artists seemed at times a little more paste than necessary. On the plus side the female corps delivered an assured and well-disciplined Shades entry, and indeed the three shades solos, those marvels of classical dance, were well executed, Yuhui Choe’s first variation being particularly sensitive to the music. I am uncomfortable with the shades smiling through these variations – this is an opium-induced hallucination, not the usual balletic Act III hoe-down. José Martín was a good and accurate Bronze Idol without the final ounce of zip some dancers can find for the brief solo. Elsewhere things sagged – the two pas de quatre in the Garden scene were ragged (the second ‘big girls’ pas was particularly painful with each of the four good dancers blissfully unaware the other three). There was unfocussed dancing from attendants and bayadères, the most uncomfortable of which was from the six men in the Garden scene. Time for some more practice boys!

Not that anyone was helped by Valeriy Ovsyanikov’s noisy conducting – the score is real tutti-frutti, but the melodies are toothsome and have a simple, toe-tapping attractiveness; the problem was that the conductor rarely looked at the stage, preferring slower tempi which sap the life blood from dance. Makarova herself was notorious as a dancer for slowing the music down, so it is apt that her production should be so sluggish; but what it does is to compromise the momentum, making movement ponderous and stretching dancers who, in some cases, are not particularly musical and, in dance terms, are just about holding it together.

The production looks ragged and is, frankly, sparse, under-populated of court and bare of stage, and the lighting by John B Read is now a disgrace, with wayward overhead spotlights, stygian gloom in several scenes and ruined effects. Covent Garden is purported to have the most sophisticated lighting rig in the country, so why the cack-handed effects of provincial rep from the 1950s? Not good enough and an insult to the artistry of the lead dancers.