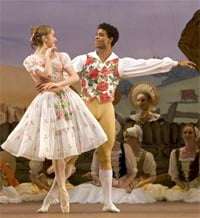 La Fille mal gardée is 50 years old and the bunting should be out all along Floral Street. That it is often described as “Ashton’s sunny comedy masterpiece”, “a perfect ballet” and “perfectly crafted entertainment” should not detract from what it is: perfection in art is rare, and the fact that Frederick Ashton did create as near perfect a ballet as is humanly possible is an astonishing achievement.

The burden brought by that fact on The Royal Ballet, the company for whom it was made, is heavy indeed. The dance world looks to the company to dance this masterpiece in a definitive fashion, so a collective holding of breath accompanies each revival. On the evidence of this one, very well indeed (collective breath released).

Yes, Alexander Grant, to whom Ashton left the rights of this work and who created one of the lead roles way back then, does tamper somewhat with the work, adjusting and re-focussing, but it is small matter and nothing that cannot in the fullness of time be corrected. The essence of the ballet remains intact, the particular ‘Ashton’ style of dancing well-enough evoked and the work performed with the sunny enthusiasm needed for this charming tale set in a perpetual summer. 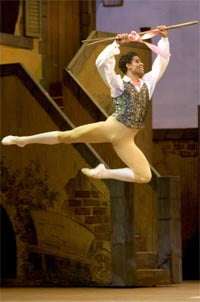 The company fielded its A-cast of experienced ‘Fille’ dancers but it was gratifying to see the corps de ballet enter into the spirit of the work so wholeheartedly and deliver the simple yet charming choreography with style and élan. Small roles continue to be well observed, with Paul Kay is a preening and characterful cockerel – although Alastair Marriott’s Notary hurtles beyond caricature into grotesquery.

But all eyes are always on the lead four. Jonathan Howell’s simpleton Alain is, as ever, beautifully judged and nuanced, his stupidity endearing without being extreme, his innocence sweet, his disappointment at losing Lise palpable. He understands Ashton and his style, has assimilated Grant’s advice on the role yet makes it his own.

Welcome indeed is Guest Principal Will Tuckett’s return as the bossy and loveable yet misguided Widow Simone. He doesn’t pretend to be a woman but plays on his height and mannish gestures, creating character and adding small touches all his own – as the Widow, her silent conversation with one of Lises’ friends about how she can’t believe her little girl has grown up so quickly was masterful. His comic timing continues to be superb, the clog dance delivered with aplomb and his total belief in the little world of this ballet unquestionable.

In the roles of the lovers, star dancers Carlos Acosta and Marianela Nuñez enchanted. Acosta now has balletic superstar status, and his performances are now attended by a slightly hysterical audience section for whom his mere appearance is enough. Gladly, Acosta has artistic integrity and delivers of his best. He appeared relaxed, refreshed and engaged, his superb technique clearly delineating the felicities of Ashton’s choreography, his peerless turning ability used to effect without spilling into showing-off, his feet perfectly pointed in doubles tours, his jump high and bright. He smiled with genuine pleasure and communicated a very Jack-the-Lad Colas: a little rough round the edges, but so much in love with his Lise.

Nuñez continues to astonish. She is, as we all know, a classical dancer of immense distinction, but she is even better in demi-caractère roles such as Swanhilda in Coppélia and as Lise, where her bright, cheeky personality shines bright as a button. Her Lise is definitely a country girl, rather unsophisticated, and certainly headstrong – her teenage strops with her mother are a delight. Her dancing is very bright and her technical capacities so developed that she tosses off Ashton’s fiendish footwork with glee.

If I have one criticism, it is Nuñez’s insistence on bringing legs up to ‘six o’clock’ in arabesques penchées, which ruins the line and distorts the choreography. She is mindful to bend and to employ lush épaulement, but the brightness of her dancing is, at times, ever so slightly un-Ashtonian, who painted very much in pastels rather than acrylics. A little more gentleness both in terms of physicality and character might be a path worth exploring. This however is a minor quibble, given the immense pleasure of her dancing and, in the famous ‘when I am married’ scene, the power and clarity of her mime. Her relationship with Acosta’s Colas was marked by a truthfulness and an intensity which touched the heart.

Daniel Capps led the orchestra, and when they followed, conducted a decently alert performance. Alas, some problems of synchronisation were apparent at times (especially in the Second Act), and there were moments when a greater briskness would have been welcome to maintain the momentum of the performance. Sets and costumes are, as ever, by Osbert Lancaster and remain a delight, but the lighting continues to be messed around with. Why on earth the stage goes dark for the final pas de deux is anybody’s guess.

Further casts will bring their own gloss on this favourite work – a judicious choice will ring an evening of unalloyed pleasure.