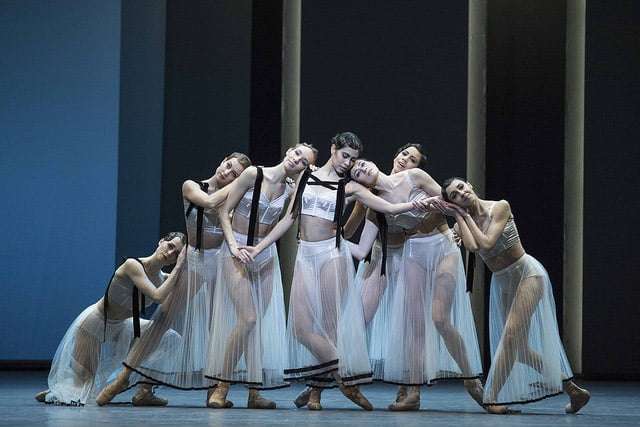 Quite why The Royal Ballet and, indeed, the Royal Opera House have been moved to mark the centenary of Leonard Bernstein is not exactly clear. The American composer/conductor seems never to have appeared in Bow Street in either capacity, and yet here we have, with great fanfare, our premier dance company’s tribute to him. Indeed, until the first night of this new triple bill, his only presence in the repertoire was through Liam Scarlett’s The Age of Anxiety, itself as recently created as 2014, forming the central section of this programme. Bernstein was not himself alien to the dance world, and several of his compositions were made for movement – West Side Story, Fancy Free while the Age of Anxiety, originally the composer’s second Symphony, was choreographed by Jerome Robbins in 1950 for New York City Ballet. However, Bernstein’s episodic compositional style imposes its own constraints on creators of dance, so both Wayne McGregor in Yugen and Christopher Wheeldon in Corybantic Games, having chosen their scores, delivered works defined by the music’s structure – seven of the Chichester Psalms and the five sections of Serenade (after Plato’s Symposium).

A little Bernstein often goes a long way, and so it proves with this somewhat indigestible evening: the orchestra have a whale of a time alongside sundry singers and instrumental soloists – in particular, the admirable Co-Concert Master Sergey Levitin as the solo violin in Corybantic Games – who give their considerable all, but the programme fails to hang together, each work existing independently of the other two, the sense of the parts adding to a sum greater than the whole distinctly lacking. 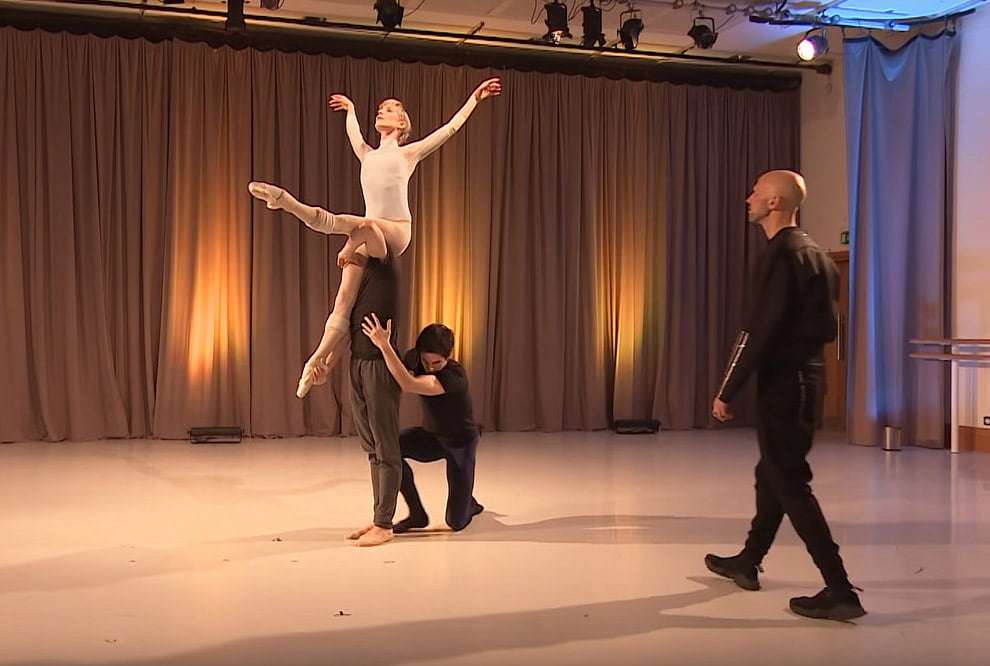 Both McGregor and Wheeldon have reached for the dictionary in naming their new ballets, the former opting for Yugen, a concept in Japanese aesthetics denoting ‘dim’, ‘deep’ or ‘mysterious’, the latter presumably picking up on the mention of Corybantic Games in Plato’s Ion (the adjective denoting ‘frenzied; agitated; unrestrained’). This obscurantist approach to labelling works in art is simply tiresome, serving to set the creator above his audience, neither illuminating nor informative.

Yugen sees McGregor in mellow mood, the brash angularity which has become his trademark as the years have rolled on by, here softened, curved, cushioned. The big news, in fact, has not been McGregor but the collaboration of potter Edmund de Waal, who has provided three tall structures, simple rectangles played upon by Peter Mumford’s expert lighting design. De Waal’s concept is, frankly, underwhelming, not a million miles away from Yolanda Sonnabend’s three columns of light for MacMillan’s Requiem, but sufficiently cool and elegant in the context. Loose fitting tops and mid-calf trousers in varying shades of red for both sexes make for a striking stage picture, even if they sometimes blur the dancers’ body lines.

McGregor sets his talented dancers into motion, emphasising turns, spins and curves, arms undulating, a welcome sense of flow and fluidity in their movements. It feels organic, but distant from the music of the Chichester Psalms, McGregor’s invention running alongside that of Bernstein, rather than inhabiting it. There are notable performances, not least from Calvin Richardson, a young company member who consistently catches the eye with both the legato quality of his dancing and a distinctive stage presence and Joseph Sissens, another up-and-coming artist who displays a sharpness of attack and precision of movement. It is all cool, elegant stuff, if a trifle bland, but serves well enough as an opening ballet. 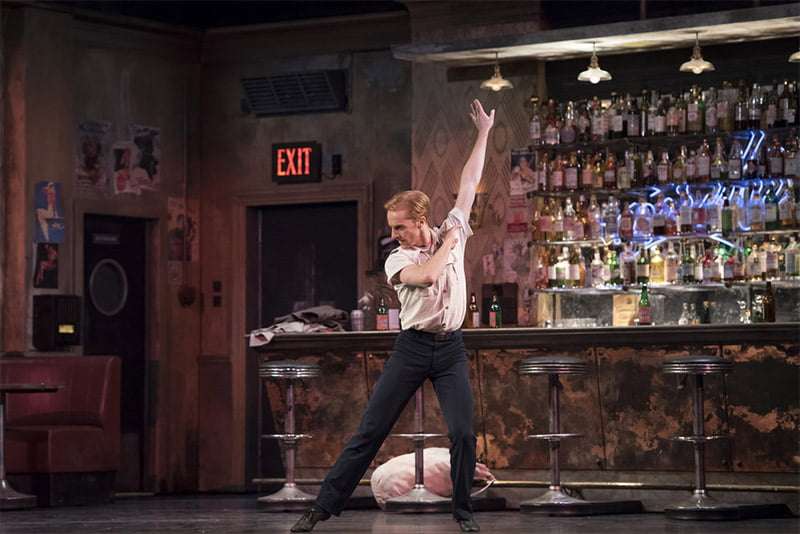 Liam Scarlett’s The Age of Anxiety was not well received when premiered in 2014, and it has not been visibly altered for this revival. Its strengths and weaknesses remain as they were – Scarlett opts, rather admirably, for a sort of narrative to accompany Bernstein’s reaction to W H Auden’s poem of the same name. Unfortunately, his rather shaky dramaturgy does not help, and while the work is packed full of observational detail and subtlety, it falters along the way, with scenes too long drawn out and a weak ending. Potentially interesting elements are simply dropped – Kevin Emerton’s Fairy Godfather Bartender, after having brought the initial tableau to life with clicks of his fingers, simply disappears from the tale. This is, despite a short interlude involving a soldier and his girlfriend, a four-hander in which a quartet of lonely souls who meet in a bar, slowly reveal their hopes and, most importantly, desires for each other.

Sarah Lamb had the difficult task of filling Laura Morera’s shoes as the vampish Rosetta, and opted for a Grace Kelly-like coolness; Alexander Campbell made for a terrifically fleet naval recruit Emble, a sexually ambivalent chancer who has an eye for the girls and the boys, while Bennet Gartside reprised his frustrated aging businessman and closet homosexual Quant. Tristan Dyer also returned to his created role of Malin, here a young gay man slowly making his way through his own confused feelings. They all perform with considerable gusto and aplomb, even if Scarlett’s choreography is rarely expressive or advances the narrative, but The Age of Anxiety cannot be counted as a success which, given the timing of its revival, increases the worries concerning the choreographer’s production of Swan Lake later this season. 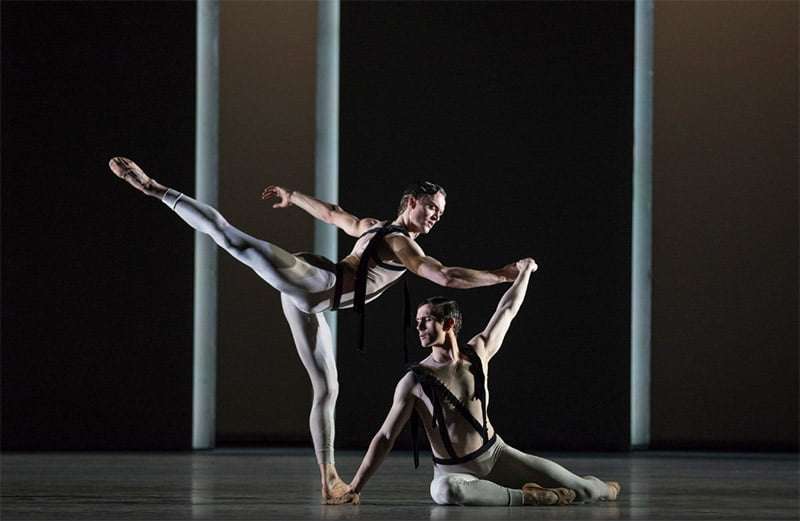 Christopher Wheeldon’s Corybantic Games is far from portraying frenzy, agitation or lack of restraint as its name would suggest. It is, however, suitably evocative of Ancient Greece in some of its movements – there are antique poses, dancers moving and frozen in two dimensions – and Erdem Moralioglu’s costumes evoke the imagery of the period: the women, clad essentially in bra and panties, appear first in chiton-like, gauzy over-dresses, while the men seem bare-chested in the low denier top half of their leotards; both sexes are festooned with different black velvet harnesses. The costume designs are reminiscent of others, from David Bintley’s early Greek games-inspired Choros designed by Terry Bartlett to the white and black creations by Sophie Fedorovitch for Frederick Ashton’s Dante Sonata and Symphonic Variations, proving that, in fashion, there is nothing new.

The absence of information in the programme about the concept of Bernstein’s Serenade means that most in the audience will have missed the essence of Wheeldon’s reaction to it. Plato’s ‘Symposium’ discusses the nature(s) of love, which feeds directly into the choreographer’s vision, not least in the pairings he establishes: male-female (the elegant pairing of Lauren Cuthbertson and Ryoichi Hirano), female-female (the well-matched Yasmine Naghdi and Beatriz Stix-Brunell) and male-male (the powerfully expressive combination of Matthew Ball and William Bracewell). These six dancers feature most in the adagio fourth section, by far the strongest of this five-part work, and are closest to the meaning behind the score. Elsewhere Wheeldon, never less than fluent, opts for a Greek games flavour, with Tierney Heap making for an impressive Amazonian soloist in the allegro final section and Mayara Magri and Marcelino Sambé dancing up a storm in the third. But, apart from the fourth movement, this ballet often falls short of any meaningful intensity, the choreography possessing a slightly unfocussed quality, the reaction to the music uninspired.

Wheeldon favours large-scale, wheeling movements, semaphore gestures and a particular ‘crouching spider’ pose which is, frankly, ugly; this lack of beauty in the choreography is alienating, as these superlative dancers are time and again made to corrupt the purity of movement and proportion inherent in their bodies and perfected by their training. Wheeldon marshals large forces with confidence but has a propensity to have sections of dancers perform completely different movements – it can, and here does, add up to visual cacophony, the contrasts simply too jarring. In all Corybantic Games (read as Corbynatic by some on the first night…) is a cool, distant work, episodically effective but ultimately impenetrable, confirming Wheeldon as an efficient step-smith.