Frankenstein – Ballet in three Acts to choreography by Liam Scarlett based on Mary Shelley’s gothic novel, with music by Lowell Liebermann [world premiere] 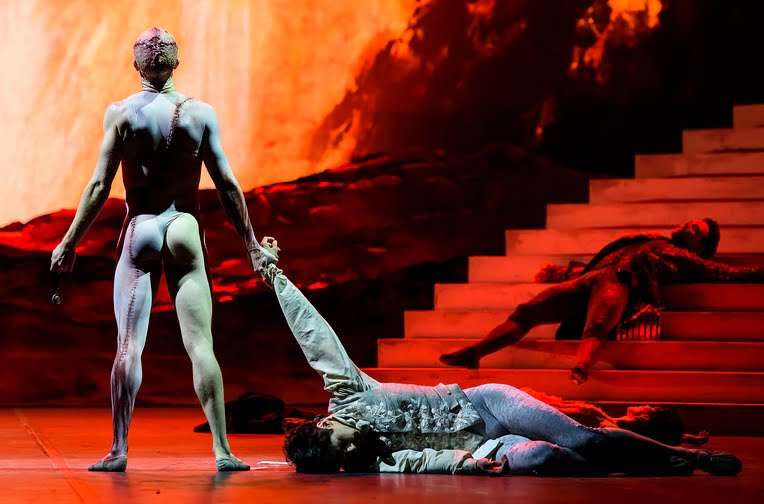 Just like the creature brought to life by the eponymous doctor, Liam Scarlett’s Frankenstein is a work of many parts, not all of which are entirely coordinated to the rest. Scarlett, widely regarded as one of the great hopes of British ballet, certainly enjoys an international career, creating works the world over, and it is a mark of director Kevin O’Hare’s faith in his talents that he has become the youngest choreographer to have created a full-length, three-act work for The Royal Ballet. That faith is at best partially rewarded.

The choice of Mary Shelley’s story is problematic in itself. Scarlett has stated that he wishes to bring out the human side to this tale, and indeed focusses on the desire for identity in a being created and given life by another which is a tall order to portray in dance. Love does exist in abundance in this narrative, however the fact that Elizabeth, the girl and then woman we are shown Frankenstein does in fact love from the very outset, never finds her own affection for him demonstrably reciprocated, frustrates one of the elements that dance can truly express. She is constantly pushed away, either because Frankenstein loses his mother, or is later haunted by the horror of his creation in the anatomy theatre and then by the Creature itself, who comes to find him. Pas de deux for these central characters are, therefore, infrequent, and often half-formed, hesitating creations, never flowering into the full-blown passion that ballet can express so uniquely. Scarlett also becomes another choreographer who, in a desire to give flesh to his narrative, simply tries to tell too much, clogging the arteries of his work with superfluous and, at times unengaging, detail. The pantomime scenes of the first 30 of the 50-minute First Act show childhood episodes, Frankenstein’s preparations to leave for university, his proposal to Elizabeth, the resultant merry-making of the domestics, his pregnant mother’s death during childbirth, all to tell us that Frankenstein becomes a man burdened by grief and marked by death when he finally enters the anatomy theatre. It is all simply too much. 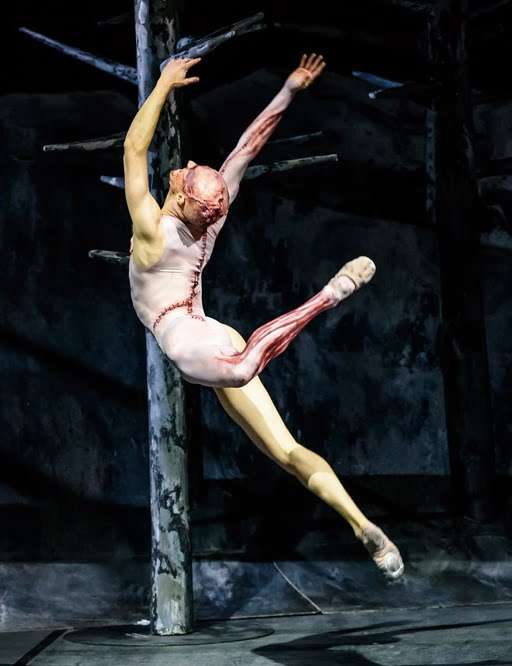 One of the limbs sewn onto this particular ballet-body is Lowell Liebermann’s busy score, which scurries hither and thither, sliding between styles, sometimes reminiscent of film, at others of pastiche of other ballet scores – Act Three opens to a waltz which most definitely has the blood of Prokofiev flowing through its veins. Too often it chugs along, providing weak underpinning to the dance. It, like the story-telling, is prolix, set piece dances, solos, duets or ensembles, drawn-out, over-long. There are moments of effectiveness in which the orchestra finds its voice and fuses with effective movement on stage, but they are few and literally far between.

John MacFarlane’s production is undeniably handsome, with effective sets and beautifully-tailored costuming; his anatomy theatre is a superb creation, but he has let himself run away somewhat with the contraption which descends from the flies to conduct the lightning bolts into the reassembled corpse. The dramatic lighting of stage picture confirms the trend in new classical dance works towards a dance-theatre aesthetic; in common with almost every new ballet seen at Covent Garden over recent years, Scarlett and his team have provided animated projections, which mean that, for their audience, there is always something to look at during the course of this ballet’s near-three-hour duration.

Whether intentionally or not, the choreographer has also provided that audience with a run-through of the company’s repertoire – there are echoes of MacMillan’s Manon in the first Elizabeth/Victor duet, Mayerling with the dancing maids and tavern tarts and Romeo and Juliet’s Mercutio in Henry Clerval’s ball scene solo; of Ashton’s La Valse in the same; of de Valois’ The Rake’s Progress in the table caperings of the tavern again; of Coppélia in the sparking reanimation machine in the anatomy theatre; of Petipa’s Sleeping Beauty in the costuming and game of blind man’s buff in Act Two and of Bournonville’s La Sylphide, again in the ball, Victor seeing his Creature among the dancing guests of his wedding festivities in the same way as James sees the Sylph. What Scarlett struggles to find in the over-complicated narrative, the strong designs and all these choreographic influences is his own voice; all too often movement is polite, fluent and no more. There are, however, moments of real power and individuality: the entry of The Professor for his demonstration of anatomy (powerfully portrayed by Thomas Whitehead, an artist moving effortlessly into character parts) is simple and striking, an atmosphere of tension and expectancy immediately established, and the final confrontation between Victor Frankenstein and The Creature is focussed and weighty, the interplay clear, the conflicting emotions of attraction and revulsion, fascination and horror, palpable. Likewise, when The Creature pins down Elizabeth, desperate to court her as a man would, yet unable to stifle his mounting rage, Scarlett breaks free of all the self-imposed constraints on his choreographic creativity, and produces movement which finally is imbued with meaning, the steps and gestures themselves containing all the narrative needed. 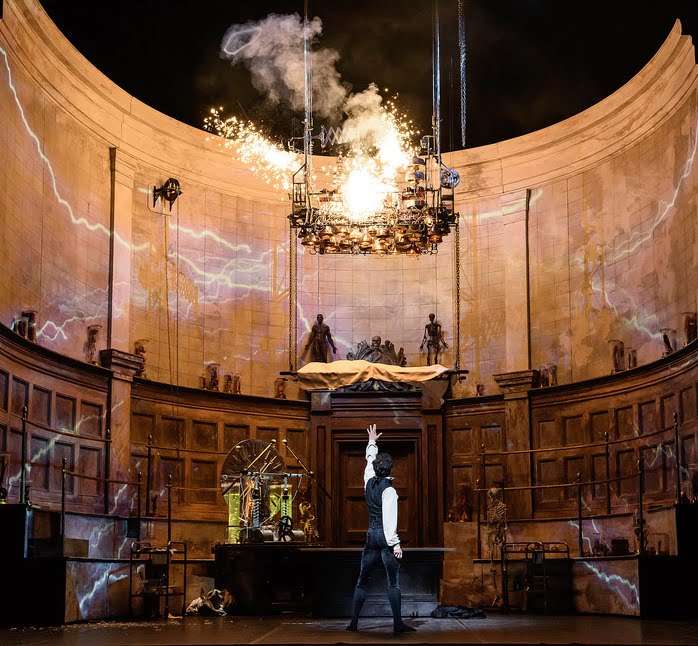 His first cast of dancers is superb and cannot be faulted in their commitment to his vision. Laura Morera confirms her status as a dance-actress of uncommon talent, the strongest this company possesses, and able to make every inflection and detail count. Her musicality is faultless, which allows her to make much of Liebermann’s score. Likewise, Federico Bonelli invests much into the role of Frankenstein, even if he is called upon much of the time to look anguished and little more – he is a sensitive artist and works hard to give depth to his portrayal. Steven McRae is striking as The Creature, and he provides a powerful contrast to Bonelli, despite spending too much time skulking about. When allowed to express himself, McRae reins in his natural virtuosic disposition and depicts an agonised being, sentient enough to realise that, as an unnatural creation, and despite his all-too-human needs and desires, he will never be like other men. His joy at his power to frighten and kill is always tempered by his guilt and despair at seeing himself do so. Grace Meaghan Hinkis portrays a sweet, innocent Justine, the housekeeper’s daughter, whose friendship for Elizabeth and affection for the young William Frankenstein turn to horror as she is accused of the little boy’s murder and hanged at the end of Act Two.

Frankenstein is a co-production with San Francisco Ballet; standards are very high, and no expense has been spared on bringing it to the stage, but Classical Ballet is a very specific art form and this new production confirms its continuing slide into the world of dance-theatre; Scarlett and his team have moved another step towards the world of Matthew Bourne and Northern Ballet Theatre. Just as with much of Christopher Wheeldon’s narrative work, this young choreographer’s story-driven output fully embraces the advances in stage technology (as did every dance creator of note from the past) but loses something of the uniqueness of the original in the process. The purity of Classical Dance and its remarkable ability in the hands of someone of talent to convey emotion with devastating directness are here fused with an approach heavily influenced by film and blockbuster musical theatre: in that amalgam something precious is lost. Scarlett has given life to his Frankenstein but the question is whether as a ballet it will have a long and happy existence.