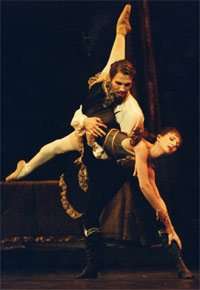 Mayerling now holds a special place in The Royal Ballet’s repertoire for it was on the first night of a revival in October 1992 that its choreographer, former Director and, arguably, the last of the great British dance creators, Kenneth MacMillan died backstage of a heart attack. The ballet which, if truth be told, has always garnered mixed reviews, then assumed another, totemic quality for the company, hence its regular return to the schedules (this revival marks what would have been MacMillan’s eightieth birthday – although look in vain for any form of ‘celebration’ of his over 40 work oeuvre: Romeo and Juliet returns to the schedules later in the year (yawn) and there is one mixed bill of three of his one-act works.

In this revival, The Royal is fielding no less than five Prince Rudolphs, some with more proven track records in drama than others. Johan Kobborg’s assumption of the role is known to audiences already, but that cannot detract from his truly remarkable performance. Always the most thoughtful and intelligent of artists, he invests Rudolph with a Hamlet-like quality, entirely apt as the Crown Prince sees the corruption of the court around him. Kobborg’s small stature works in his favour – he is forever the child playing at being grown-up, be it at his own wedding ball, in his naive political machinations with four separatist Hungarian officers, and even in his macabre game-playing in the bedroom. 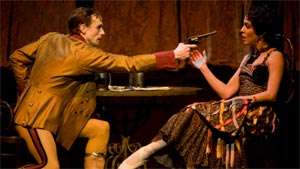 The key to Rudolph’s persona lies in the first of his many pas de deux, which is with his mother, the frigid Empress Elizabeth. Kobborg’s desperation for maternal affection was palpable, although unfortunately both his involvement and intensity of portrayal were unmatched by a bland and leaden Deirdre Chapman. This set the pattern for much of the evening – Kobborg seemed to be dancing and acting on another plane from a generally wooden and earth-bound company. It was only with the appearance of Leanne Benjamin as Mary Vetsera that Kobborg found his match; as their relationship progressed to its inevitable fatal conclusion, we were in the presence of greatness indeed – two mature artists for whom technique is totally subsumed to the drama.

Benjamin, possessor of Fonteyn’s mythical quality of appearing decades younger than she actually was (Benjamin is in her mid-forties), could not be faulted, Macmillan’s idiom hot-wired as it is into her muscle memory. Her pas de deux with Kobborg were white-hot with sex, love and a searing desire which excluded all else. Together they descended into the hell of Rudolph’s drug addiction and developing psychosis. Kobborg’s physical wreck of a Rudolph in the last act is almost too painful to watch, his face ashen with illness, his body aching with pain. His was a performance of rare intensity indeed, coupled with the astonishing stamina that the role demands of any interpreter. 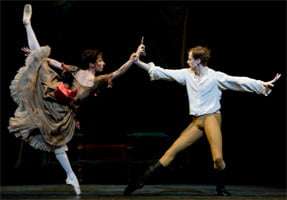 Laura Morera, as Rudolph’s ex-mistress the Countess Larisch was not on a par with the two lovers; she was puzzlingly superficial in her presentation of the role, focussing on its flirtatious and playful side, although her final scene when she is ordered out of the Prince’s apartments by his mother ratcheted up the drama. Alas, the company was not on good form, with much stock characterisation where there should have been subtlety, and several unforced mistakes. In the brothel scene (no MacMillan ballet is complete without a few tarts and whores), the female corps were about as sexy as a wet weekend in Staines, nice ballet girls pretending to do sex and either failing miserably or over-egging it completely. There was a lively lead whore Mitzi Caspar from a perky Helen Crawford who managed to get some life from the four Hungarian officers, one of whom has been at too many pies during the summer break, another a little too fond of the hairspray and a third who seems to have forgotten that in executing doubles tours en l’air, it is customary to point one’s feet. He looked like a helicopter in flight. Jonathan Howells repeated his Bratfisch (Rudolph’s cab-driver and entertainer) but although his musicality is spot-on he is now simply too old for the part, looking more like an old retainer and careful in his moves where he should be carefree. Casting dancers past their sell-by date is, alas, something of a Royal Ballet tradition. 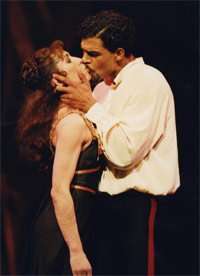 Alas, it is a matter if fact that The Royal always seems to take time to get going at the beginning of the season, and indeed in a run of any ballet, so paying customers are always well advised to go for later performances. Why that is has not been addressed by successive directors.

Nicolas Georgiadis’s evocative sets and sumptuous costumes looked superb and lighting has been attended to in an uncharacteristically thorough manner for The Royal Ballet. Alas, much of the blame for the leaden quality of the performance (the two leads apart) must be taken by company Music Director Barry Wordsworth and a lumpen orchestra. Normally Wordsworth knows his business and conducts well, but here tempos were predictable and four-square and the orchestra, no doubt tired from their exertions in “Don Carlo” and “Tristan and Isolde” were resolutely ‘heads-down’, producing unfocussed orchestral sound and imprecise playing. It really is not good enough that this ensemble, capable of producing the most ravishing of pit playing, should allow itself and be allowed to deliver a performance of such astounding mediocrity for the dance. Only in the final act did both Wordsworth and the players wake up and give some indication of the power of Liszt’s music as here arranged by John Lanchbery.

Mayerling still packs a punch but when the music is poorly executed and the company looks under-rehearsed, the seams in what is a sprawling narrative become all the more apparent. However, one can state with certainty that there will be no finer interpreters of the central roles this season than Kobborg and Benjamin. They are simply unmissable.